When invited to a screening of the new film, Una, my first react was to say ‘no’ as I don’t think of myself as a film reviewer. I’ve written a few last year about the Oscar nominated films, and films that moved me when I saw them at the New York Film Festival (Patterson, Manchester by the Sea). I basically told myself I’d write about film when it inspired me, and who knew if this would. But then I noticed it was based on David Harrower’s powerful and upsetting play, Blackbird that I saw in March, 2016 on Broadway with the fearless Michelle Williams and the magnificent Jeff Daniels (click here for the review). It’s an intense and disturbing love story that unsettles. So a film based on that play, written by the playwright, starring the perfectly cast Rooney Mara, who was so good in the equally intense love story Carol, just sounded too good a premise to turn down. It didn’t hurt that it was being shown in the comfortable screening room of the Soho House in the Meatpacking District. So the ‘no’ became a yes, and I’m so glad I changed my mind.

In regards to the play, I wrote in my review that it was about a young woman, Una showing up at the work space of her former love, Ray to confront and to learn what happened that one fateful evening so long ago. To tell him her story, and to hear what he has to say. The part that separates this from many similar tales, is that the relationship happened around 15 years ago, and she was 13 years-old at the time. Sexual abuse. Intense love. Consent. Statutory rape. Denial. Regret. Anger. Abandonment. Utter shame and a complicated acceptance of guilt. On both sides of this pair. These are some of the themes being thrown at us in the play, relentlessly and without mercy, and the movie is no different. 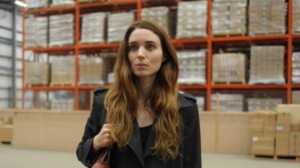 As directed by Benedict Andrews (St. Ann’s Warehouse and National Theatre’s A Streetcar Named Desire), Una is played most perfectly by Rooney (David Fincher’s The Girl with the Dragon Tattoo). We see her as her 13 year-old self, perfectly portrayed by the young actress, Ruby Stokes (Da Vinci’s Demons) on that tight rope between childhood and young woman. In Rooney’s adult frame, Una is draped in complex emotional states, as if the 13 year-old girl is trapped inside, screaming and crying out in pain and confusion into the brain of the 28 year-old woman.  Trauma has encased her, and her only escape is to confront it.  So through some elaborate scenarios setting up her fragile and overly sexualized state of mind, we travel with her to the industrial factory where Ray now works.  It feels like she is drawn against her will, while at the same time, wanting to be pulled.  There is no stopping this crash, and we watch as if it’s in slow motion. 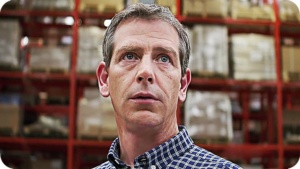 Ray, most powerfully played by Ben Mendelsohn (2010 film, Animal Kingdom, Netflix’s Bloodline) is trying hard to recreate a life after the discovery and legal aftermath of this forbidden relationship.  The look on his face as Una enters his work space is expansive and intense, and what follows defies expectation.  It’s a jarring and provocative film, from the get-go with quick edits from peaceful serenity to harsh and electric pulses.  The director and the playwright attempt to open up the space for this conflict to play out, taking it beyond the lunch room where the play in its entirety takes place. And that’s not a bad thing.  The expansion works, generally speaking especially in the flashbacks which seems obvious and stunningly beautiful, as this story is so much about what happened 15 years ago.  Those images and interactions are intense and dense with emotion. In terms of the present moment, the moment of confrontation, the use of co-worker, Scott. a strong Riz Ahmed (Rogue One), the work place conflict with Ray’s boss, and the cocktail party that follows, all add to the rising level of tension, but are they needed? 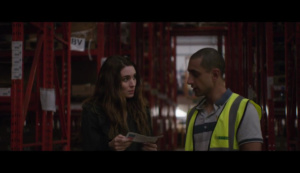 This is the question that anyone seeing the film who has seen the play will have to contend with. Blackbird, the play, never leaves the factory, nor the lunch room, all adding to the claustrophobic intensity of the play, but it’s unclear if that would hold in a film. The first 3/5th of the confrontation works brilliantly, even as they move it out of the lunchroom and into the factory, other storage rooms, and even a bathroom. My companion to the screening, who has never seen the play, thought it made total sense that the remaining 2/5th ventured out into the real world, and into Ray’s new life. For him, the stakes were risen higher and higher as if the confrontation was about to explode. If I try to forget the electricity of the one-room one-act play, I can see it and feel it, as I did watching the film. But I’m still not sure.

Regardless of this question, Una remains a powerfully jarring and provocative story. An excavation of buried memories, abandonment within the framework of inappropriate and shameful love. It’s unflinching, complex, and emotional, and does Blackbird justice, even as Una and Ray, along with us, are shaken to the core.