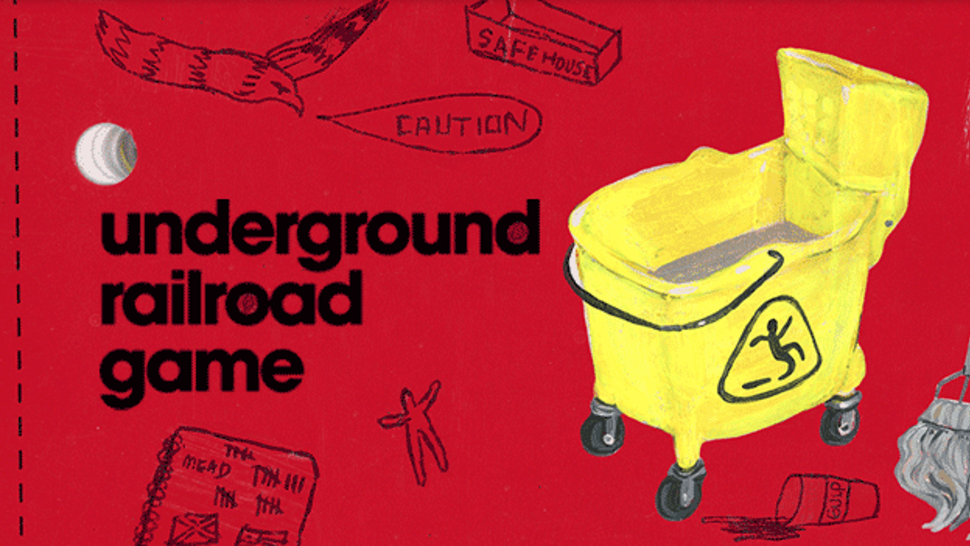 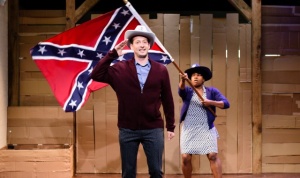 If I had wanted to see a porn bordering on S&M, I would have rented it. If I wanted to be lectured about what a horrible creature I am for being white, I want the ability to state my forefathers were from the North and didn’t do slavery, so lecture somebody else. What am I talking about, the hit show Underground Railroad Game at Ars Nova, thanks to the New York Times. I think I know now why The Kagan’s want to disassociate Natasha, Pierre and the Great Comet of 1812 from Ars Nova. If I were the producer I would not want my show associated with this production. It is crass and tasteless for the purpose of shock. I wasn’t shocked just sickened that this is now theatre. 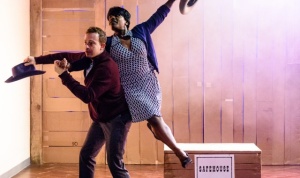 Creators Jennifer Kidwell and Scott Sheppard, not only wrote, but perform in this piece, which is based on a fifth-grade exercise Sheppard played in school. The two performers developed this piece with the Lightning Rod Special Company. The show is one part this game, where the audience who is now the class is divided into two groups–Union soldiers and Confederate soldiers and one part bizarre fantasy, that lapses into more than I bargained for.

The show starts as Kidwell is a runaway slave who seeks shelter in a barn who she later finds out is an abolitionist, played by Sheppard. They  shed their period costume and we learn they are teachers Teacher Caroline and Teacher Stuart of the Hanover, Pennsylvania Middle School faculty and we are a class learning about the Civil War. We are divided by the color of small plastic soldiers under our seats. We then break into a fantasy scene where the two dance and then go on a date where language is racism in American, thanks to the political correctness that is being shoved down our throats. 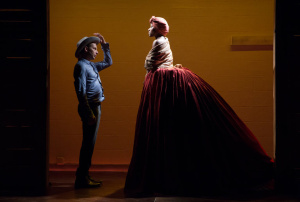 Teacher Stuart sees Kidwell standing in a oversized Civil War outfit. He removes her bodice and takes her breast in his mouth. She beckons him to go lower where he brings her to an orgasim. When a safeway house in the class has been vandalized and the word “niggerlover” is written, Teacher Stuart confesses his love for Teacher Caroline and proposes. Irate she begins to humiliates Sheppard, who ends up loving it. She strips him naked  and proceeds to use a ruler on him. He grabs the ruler and starts to beat himself and pleasure himself at the same time. When did this become acceptable to do on a stage?

Its hard to talk about the direction by Taibi Magar and the acting by Jennifer Kidwell and Scott Sheppard, because I honestly do not understand what I was truly suppose to be seeing.

I do not read about the shows I go to review before hand. I try to see them with fresh eyes, but seriously this is taking things to far.

I honestly can not believe how anyone gave this a raving review, but they did. Maybe I still believe that you can catch more flies with honey and the Emperor has NO Clothes!