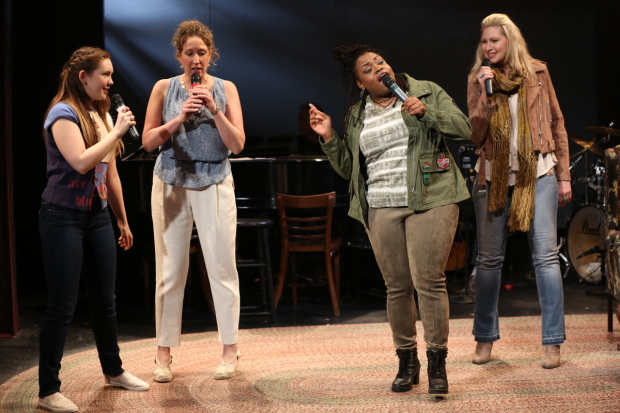 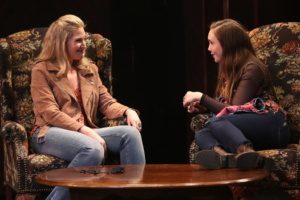 Side Show’s Bill Russell’s (lyrics and book) and Janet Hood’s (music) Unexpected Joy, premiering at the York Theatre Company, has a message that we all need to find the “common ground”. In a country so torn apart by its convictions, this message could not come at a better time. 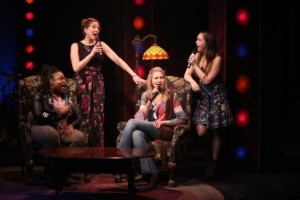 Unexpected Joy tells the story of a pot smoking, carefree, hippie musician named Joy (Luba Mason) who is hosting a memorial concert for ex-partner, Jump, in Provincetown, MA. She and her partner were rather famous as Jump and Joy. Invited to join are her daughter Rainbow (played by Courtney Balan), who now goes by Rachel, and her granddaughter, Tamara (Celeste Rose). Already there is tension as Joy forgot to pick them up at the airport, which doesn’t surprise Rachel, as her mother constantly forgot her as a child. Rachel is also furious that her parents never got married or that they failed to live like a traditional family. To get back at them, Rachel married as far from her mother’s lifestyle as she could. Her husband is a televangelist, Christian, rightwing preacher who preaches against homosexuals. Joy hopes that by inviting her daughter and her granddaughter to join in song, she can smooth over hurt feelings and break the news that she is getting married, to a woman. Lou (Allyson Kaye Daniel) is not only a singer but also a lesbian and black. To Rachel, this is the ultimate cardinal sin and she sees this as the ultimate betrayal. Tamara sees Glam-ma’s point of view and hopes to follow in her footsteps. Can three generations learn to accept and go with the flow? Only the music can tell. 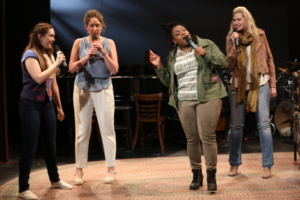 Luba Mason commands the stage as Joy and nails all of her numbers. Ms. Mason looks sensational and shines throughout the piece, but especially in “I Don’t Wanna Get Married”. Courtney Balan has a beautiful voice and you feel sorry for her plight and understand how she became so conservative. In her eleven o’clock number she knocks “Raising Them Right” out of the park. Celeste Rose is the most surprising talent here. With her pure voice and rapturous delivery on “When Will I Have My Own”, Rose not only stands out on her own but sounds amazing blending in on “Before You Arrive” and “What a Woman Can Do”. Allyson Kaye Daniel has a killer voice and some comedic chops. She shows her jazz stylings on “She’s Got a Mind of Her Own,” but she lacks chemistry with Mason and the relationship seems rather unbelievable.

Russell does better on the lyrics than the book, which seems to want to make stereotypes out of each of these characters. The fact that “I’m a Good Girl” as the second song and the song that introduces Tamara’s songwriting skills, boggles the mind. Why not put “When Will I Have My Own” here and write another fabulous song for Tamara. The show is so overstuffed with issues, that it becomes cliché. Hood’s melodic score is reminiscent of Laura Niro and the 60’s. It is catchy but stuck in one time zone.

Director Amy Anders Corcoran keeps things light, but it almost is too light for the weight of the material.

The show is well designed by costume designer Matthew Pachtman who has created some rather fun 60’s inspired outfits. Ken Willis’ mood and stage lighting

We can all use “common ground,” and if the show had related more to that element and brought it in sooner, it would have given it solid ground.