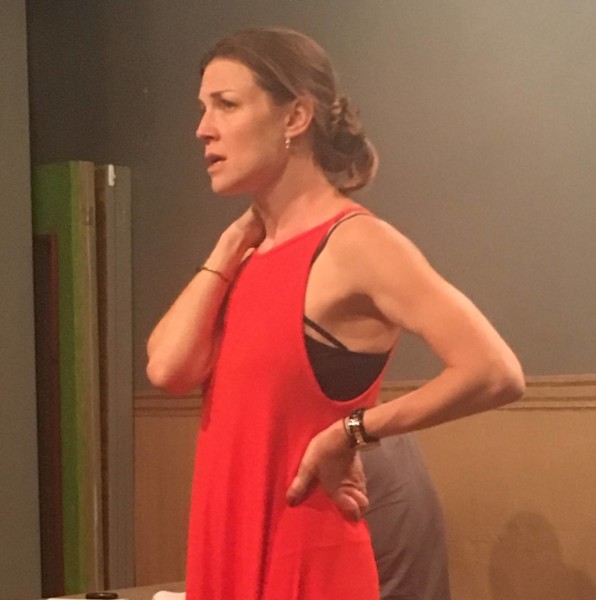 Since its creation in 1994, New Perspectives Theatre Company Women’s Work Project has had the goal of not only helping to develop specific plays, but to support residents’ growth as accomplished and skilled playwrights—to give writers added tools in the practice of their craft and to strengthen their individual voices. The Women’s Work Lab for short plays provides a supportive and nurturing environment to emerging and mid-career women playwrights. Four to six members are selected each year, along with a similar number of directors. The LAB meets monthly (Sundays) from February through June, allowing for time in between sessions for writers to continue to develop and revise their work in response to feedback. Members are expected to bring work to each session beginning with the development of an original short play based upon an assigned theme. Playwrights receive monthly feedback on their play from the LAB’s group of director/dramaturgs. Feedback is given in a unified manner so playwrights do not have conflicting advice about what to work on. The process creates a collaborative group from which members can draw inspiration and energy. Scripts are then produced in our annual Women’s Work Short Play Festival. This year the topic was “Unhinged”.

Normally this would not be something I would attend, as it is too raw in it’s development. However a producer friend of mine told me I had to see this, that there was a play there that would move me and she was right. 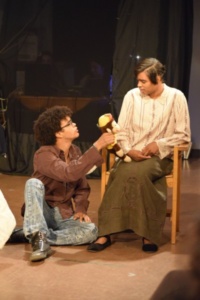 I attended program B, which started off with Kendra Augustin’s The Call of the Void. Tabitha (Jes Davis), enters having just returned home. Thanks to the direction by Mary McGinley, she spends what seemed like an eternity in silence, then begins spouting poetry.  It isn’t until her brother Jeremiah (Savion Smith) arrives, that we discover Tabitha killed her father and has just gotten out of jail. We never find out why Tabitha killed him or how she got out of jail so soon. The play just rambles on without giving us any answers, leaving us more in the dark. Ms. Davis is a interesting actress who kept our attention, however Mr. Smith left much to be desired. Ms. Augustin’s writes nice poetry and has a flow with dialogue but needs structure. 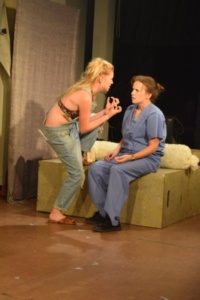 Alisa Zhulina’s Sublet was just completely unrealistic from the moment it began. The adorable and demented Tate Kenny plays Sam, a girl looking for a roommate. She is completely off the deep end and states that her last roommate was murdered brutally in the apartment to newcomer Christy (Rachel A. Collins), who doesn’t run for the hills. Instead she accepts the apartment, due to its low rent. Right then and there I stopped caring for this play because this would never happen. Christy is a nurse and it is clear Sam is off the deep end. Sam also states that there is a no boyfriend policy since the boyfriend of the last girl is who murder her….. or is he? As Christy comes home from an extended shift she is surprised by Paul (Viet Vo), Sam’s boyfriend or is he. After another psych conversation Christy sleeps with Paul. When Sam comes home she tells her. Turns out the who thing was an artistic film project Sam and Paul concocted, but why Christy played along is anyones guess. 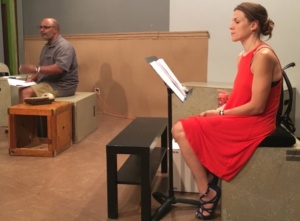 Then came Oh My, Goodness, by Cayenne Douglass inspired by a real event. On the road Debra (Jeannie Bartel) has reached the end of the line. She is on her way to kill herself, but the journey is long. Thinking that she has called a “suicide hotline,”she reaches Tom (Evander Duck) a regular man who has also had some lost. During the course of one night lives are touched, unconditional kindness shown and transformation comes from the strangest and simplest of reasons. This play is so touching, so real and so heartbreaking. Ms. Douglass is a profound playwright with an old soul. She spoke of depression and loss like she had experienced it first hand. I found myself incredibly moved not once, but three different times. Even now the play moves me when I think of it’s message.  Jeannie Bartel’s performance was mesmerizing. It was like watching someone peal layer by layer until there was noting left but the core of a human strip of presence. I felt like I was in the presence of a truly great talent. Mr. Duck added sympathy and Mary McGinely’s direction was spot on. I am not sure where this play can go next expect to be paired with another one-act as it is so superbly written, that I would not want to add or subtract from its perfection. Bravo, this was a rare moment in theatre when everything came together perfectly. 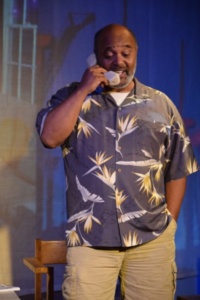 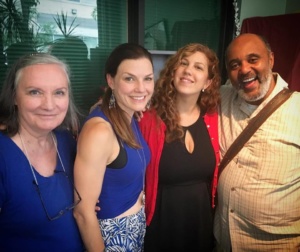 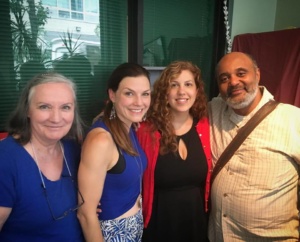