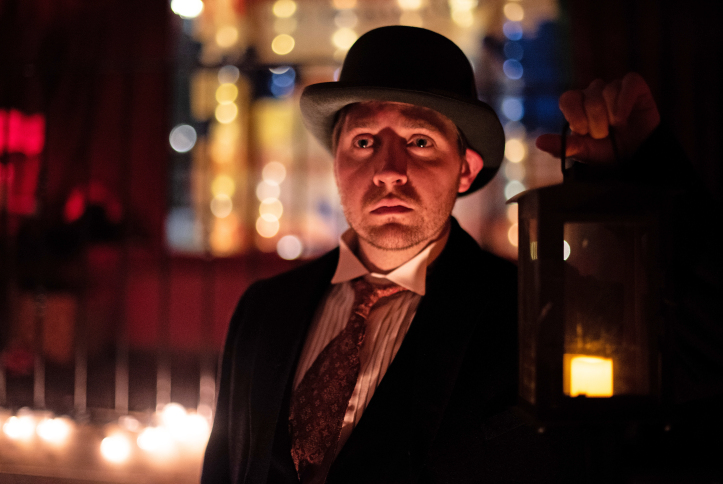 I write to you a small letter of appreciation and concern. The other night, as we made ourselves comfortable upstairs in Madame X‘s red-tinged lounge, your sleeping disfigured frame, embodied by the very game Sean Hinckle gave us pause and a moment to reflect on the life and times of Toulouse-Lautrec. The production tries with all its might to bring to life enticing, elegant, and provocative images; a slice of the modern, sometimes decadent affairs of those wild Parisian times, hung on the walls unceremoniously throughout Madame X’s lounge. The room seemed intriguingly well suited for this environmental engagement (although the lighting design needs a big upgrade), full of seduction, but with little depth below the surface. The candlelight brigade draws us in, and once your friend and patron, the flamboyant Aristide Bruant, energetically portrayed by David Raposo along with his cabaret girls (Derya Celikkol, Marisa Gold, Mia Aguirre) welcome us into the Unmaking, we settle ourselves in to the comfortable couch cradling a much needed glass of white wine to help invigorate our curious soul. It is a ceremonious introduction, somewhere in the mood and mixture of the here and now rubbing up against the there and back then, much like that fantastical movie musical, Baz’s “Moulin Rouge” did (although with a much more successful air) with those Diamond Dogs. Your twisted tale of familial disconnection and artistic engagement is paraded out before us with a determined desire for captivating imagery and a dreamy wish to elaborate and investigate your sordid tale. The maternal tea party with milk attempts to determine causality, and when it works, it entertains and invigorates, but when it doesn’t, one feels more let down by the space and its tight restrictions, rather than the idea and the impulse to illuminate.

You, Toulouse-Lautrec, in your time, was considered one of the best-known painters of the Post-Impressionist period, alongside Paul Cézanne, Vincent van Gogh, and Paul Gauguin. You flailed around Paris on disordered legs as an outsider of your class but embraced, somewhat, at the stage door by the underbelly of old Paris, rubbing shoulders with the dancers, prostitutes and outcasts that inspired your most enticing, elegant and provocative art. Your detached upbringing and the blooming of your celebrated artistic creativity is worthy of abstract deconstruction, and this cramped attempt is a valid one, although it doesn’t quite rise up to that erotic edge they so desperately wanted. The space crowds out the high kicks and blocks the visuals far more than expands them within, and the playful intentions lack the finesse and sly darkness needed to raise this adventure into something desirous, especially with the sunny brightness of Soho wafting in through the exposed window. They did well, all these creatures of the night, but 7pm afternoon sunlight should not be allowed in. Unmaking needs more pointed visuals within pools of red tinged light and structures that, for your sake, reveal the underbelly of darkness. I had visions of a stronger restructured production in a black box type theatrical space, much like the main stage production at HERE Arts Center of the inventive CasablancaBox. Within that blackness, a restructured Unmaking is possible.

Unmaking has all the ingredients and passion of something provocative and immersive but I feel your tale needs a larger less confined space and more distinct visuals to flourish. Although hemmed in, your upbringing and your deformity are high kicked out by a much determined cast, and as conceived and directed by Mara Lieberman, the drama creates a thirsty desire to find out more, read more, and understand more about you; the the late 19th century bohemian artist, poet, and painter from Paris. Bated Breath Theatre Company‘s Unmaking Toulouse-Lautrec is as colorful, distorted, and unfinished  as your wildly famous paintings worth millions in today’s market (a 2005 auction at Christie’s auction house, La Blanchisseuse, sold for US$22.4 million and set a new record for the artist). With some more focusing and maybe a change in vision and vantage, this piece of theatre could be as wildly bohemian and creative as you, the fabulously famous Henri Marie Raymond de Toulouse-Lautrec-Monfa (24 November 1864 – 9 September 1901).