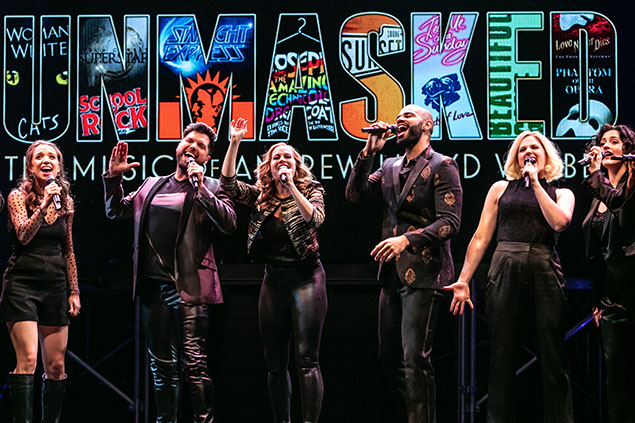 Unmasked The Music of Andrew Lloyd Webber, which opened last night at Paper Mill Playhouse features the music of Andrew Lloyd Webber and the stories behind their creation with Andrew presiding over the event on a large screen. Webber is the talent behind Joseph and the Amazing Technicolor Dreamcoat, Jesus Christ Superstar, Evita, Cats, Song and Dance, Sunset Boulevard, Love Never Dies, School of Rock and The Phantom of the Opera, as well as Starlight Express, Women in White and Aspects of Love. This show with some tweaking could easily come to Broadway and become a commercial success.

There are moments of sheer brilliance.

First there is Rema Webb (Escape to Margaritaville), who covers Song and Dance and Sunset Boulevard with clear vocals and connection to lyric that makes “As If We Never Said Goodbye” an emotional journey of the soul.

Alyssa Giannetti (Love Never Dies), has a voice like Katherine Grayson, bringing back a type of exquisite singing that seems to be missing on Broadway these days. Ms. Giannetti shines on “Unexpected Song” from Song and Dance, Love Never Dies and The Phantom of the Opera sequences. She is a true find.

Alex Finke’s (Come From Away), “Pie Jesu” was a pure toned voice that resinated crystal clear. Andrew Kober who played the starring role in School of Rock, recreated “Stick it to the Man”

The show however, is inconsistent. Co- written and devised by Richard Curtis, the show features stories told by Andrew Lloyd Webber hovering over the audience, like a Skype from the beyond. He informs us about his life and songs, with tidbits that are rather interesting, but there seems to be no through line. Songs and stories from Starlight Express, Women in White and Aspects of Love are left out, except for a mega mix that starts out the show. Before that happens Webber tells the audience “here is a preview of what is in the show, if you want to leave do so quietly.” Very British humor, but the self effacing comments don’t go over well and we even get two new brand composition called “Here We Are on Broadway” and “The Song That Everybody Hates” and the fact is we do. The show which is overly long, needs to cut these pieces.

Starting off with Jesus Christ Superstar you have, Nicholas Edwards (Frozen) who has some wonderful rifts, but the song seems underwhelming. Then we skip to Joseph and the Amazing Technicolor Dreamcoat with three songs and then back to Superstar with an unemotional “I Don’t Know How to Love Him” by Amy Justman (In Transit) and a unconnected “Everything’s Alright” (Edwards, Justman and Mauricio Martinez (On Your Feet!)) and “Gethsemane”. Martinez has too much vibrato when he is not belting, which he does extremely well so his songs by the end are powerful. His acting choices however, leave much to be desired.

Jeremy Landon Hays (The Phantom of the Opera) and Bronson Norris Murphy (Love Never Dies) both have beautiful voices, but again the acting stops the songs from connecting. I am surprised director and choreographer JoAnn M. Hunter didn’t clean this up. Her staging however keeps the showing moving and personal.

The sound design by Jon Weston doesn’t allow for the lyrics to come through as clear as they should and the costume design by Alexander Dodge is design misfire. Nothing was tailored to these performers and the fit made them not look their best. It felt like he went to a thrift store and said ok this fits you and yet it wasn’t tailored to truly fit. The silk was wrinkled and the pleather unforgiving. The odd part was at the beginning of the second act there were costumes for each show that were wonderful and I sat there wondering why didn’t they just where these?

Despite these flaws Unmasked is a show to go see and I do think it could do financially well on Broadway.

RossJanuary 3, 2023
Read More
Scroll for more
Tap
Seeing the Light, Soulpepper’s Jesus Hopped the ‘A’ Train Sizzles Strongly in the Complicated Sun
He Says: 2ST’s Grand Horizons Breaks Down Walls to Get to the Core of What Love Means