Up Close and Personal With Be More Chill’s Tiffany Mann

Up Close and Personal With Be More Chill’s Tiffany Mann 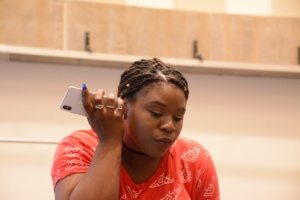 On of the stars is Tiffany Mann. Tiffany caught the natural acting and performing talent from her parents. Living and working in New York City, Tiffany is a performer in musical theater and opera. In between performances, she keeps up her singing chops working at a diner in Times Square where all of the wait staff sings. Her life goal is longevity in her career as a performer, aiming for Broadway. “Ultimately, I want to use my talents to get to a financial position to help others like so many have helped me along the way. I don’t know how my life would have turned out had it not been for those golden souls,” said Tiffany. A musical theatre star, she also joined Todrick Hall on his Straight Outta Oz tour. She made her Broadway debut as the scene-stealing, shade-throwing Nurse Norma in the hit musical Waitress. On TV, Tiffany co-starred as Cheryl on NBC’s Rise and Taystee’s mom on Netflix’s Orange Is the New Black. This winter, she gave a Lortel Award-winning performance as Shawntel/Eve in the New Group’s production of Jerry Springer – The Opera.