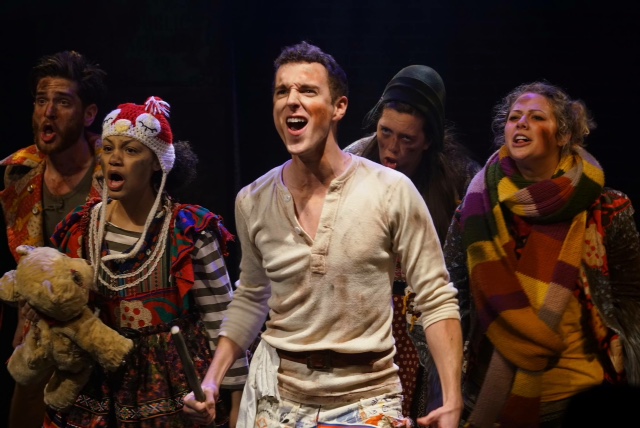 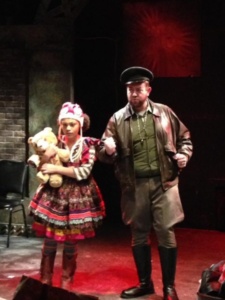 What was once designed as satire, could very well be our near future. Boho Theatre has remounted an endearing and well-timed production of Urinetown, currently playing at Stage 773.  This clever musical is set in a near dystopian future where a terrible and unexpected drought has led the governing bodies to ban all private toilets.  The only way to relieve oneself is to pay for the privilege as peeing has become privatized. Not as far fetched as it sounds, this story fusing corporate greed, government overreach and the fundamental right to pee, believe it or not, is a three time Tony Award-winner. Mark Hollmann and Greg Kotis took home that coveted trophy for their impressive and heartfelt Score back in 2002. While the title might strike some as a turn off, let’s face it, in a land that could elect Trump as President, this musical may be outrageous, but it is never truly distasteful. What could be more offensive here then found on a Presidential  Tweet at 4:00 am?  Self-referential from start to finish, this musical constantly pokes fun at itself during it many breaks in the fourth wall.  Directed by Stephen Schellhardt and choreographed by Aubrey Adams, the pace remained fervent throughout.  While the performance space at Stage 773 is intimate, the cast filled it with engagingly strong and precise movements during their whimsical performances.  Irreverent throughout, Urinetown touts it is a “privilege to pee” and this show, I might add, is a privilege to see. 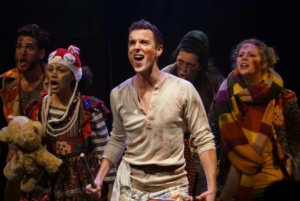 The story began around a public toilet, Amenity Number 9, where Penelope Pennywise (Molly Kral) collected the tolls of the financially burdened to be delivered to an evil Corporation, U.G.G., or Urine Good Company.  Swinging a toilet plunger, pulled forth from her utility belt, much like a baseball bat, it is hard not to compare this image with the similar one of Grammy Award-winning singer Beyoncé, adorned in her long yellow dress, from the Lemonadevideo. Although this particular diva is not defiant at all.  She would never dream of biting the hand that feeds her. It is only when she refuses to let her trusty employee, Bobby Strong (Henry McGinniss) allow his father, Old Man Strong (Garrett Lutz) to cut the line, do problems start to quickly mount for all involved. Bobby becomes the unlikely hero of the town when his small act of civil disobedience starts a revolution.  Who are they revolting against exactly? Caldwell Cladwell (Donterrio Johnson) a money hungry titan of industry and his bought and paid for team of corruptible politicians and beat cops. Officer Lockstock (Scott Danielson) and Officer Barrel (Tommy Bullington), get it; lock, stock and barrel, are the Yogi and Boo Boo bear duo tasked with keeping the streets clean, so to speak. Anyone who defies the establishment and their Machiavellian societal norms is punished with a one way ticket to Urinetown.  It isn’t long before our hero began a star-crossed, Romeo and Juliet style love affair with the most beautiful girl in town, Hope Cladwell (Courtney Mack) the not so bright daughter of power-hungry, business magnet Cladwell.  Will she join her father’s company and continue to stick it to the poor or will she follow her heart and her new beau to rock the boat?  Not wanting to “piss today goodbye” the young couple concludes “when there is wrong in the world, then we must right it.” 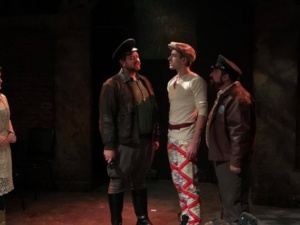 The cast involved here elevates material others may find one note.  McGinniss continues his successful string of dreamy leading men characters. Mack isn’t given much to do as the hapless and helpless heroine until the second act, when (thankfully) this spitfire turns from damsel in distress to (misguided) warrior princess. Any production would be lucky to have the scene stealing talents of a Garrett Lutz, Tommy Bullington or Donterrio Johnson as a part of their team. This show has the golden trifecta, casting all three. It is impossible to take your eyes of this troika of comedic talents.  Speaking of intentional giggles, the end of act one has a visual nod to Les Miserables which will make any theater enthusiast chuckle, even while they are looking down their noses at the show’s title.  Then there is Little Sally.  Ariana Burks, that pint-sized powerhouse, brought her signature potent vocal skills and ever-sharpening comic timing to play. Her ever expanding résumé continues to impress, even at the ripe old age of just seventeen. Her beautiful rendition of “Tell Her I Love Her” added class and verve to the proceedings. Elizabeth Wislar’s costume design defies imagination. Using what I could only guess was a treasure trove of recycled blankets, sleeping bags and other found materials, strewn together, added a compelling and intriguing visual stamp, far exceeding what was necessary. Lighting and projection design G. “Max” Maxin IV also added additional elements of ominous suspense. I will say, the venue is small. The haze effect could have been cut in half and still had the same impact. There were times the cast was simply swallowed up by the thick and dense ever-present fog. I am conjecturing they used a “one size fits all” devise that simply overpowered that space. 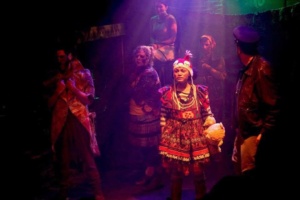 It is tough to turn on the news nowadays and not see a protest or a demonstration unfolding in the streets. Civil disobedience is becoming our daily reality. Back in 2002, it would have been impossible for the original writers to predict how timely there little comedy about governmental overreach and greed would play to a 2017 audience.  In a harsher reality that wants to cut Meals on Wheels because it “doesn’t turn a profit,” forcing citizens to pay their last pennies to pee doesn’t sound so outlandish, now does it? See this delightful fantasy before it becomes our unsolicited reality.  This show is chocked full of wonderful music and the talented cast will win over any sceptic of the unsavory sounding title. “Run, Freedom, Run” to enjoy Urinetown’seccentric fun. 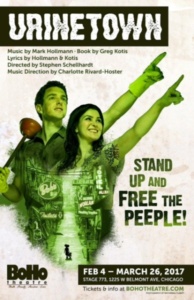 Claudia PerryOctober 30, 2022
Read More
Scroll for more
Tap
TEDxBroadway Information On How Diversity, Connected With The World Around Us and Imagination
Ben Woolf’s Angry Young Man A Little Hard To Take After The London Terrorist Attack