USWNT Celebration and Statement in NYC 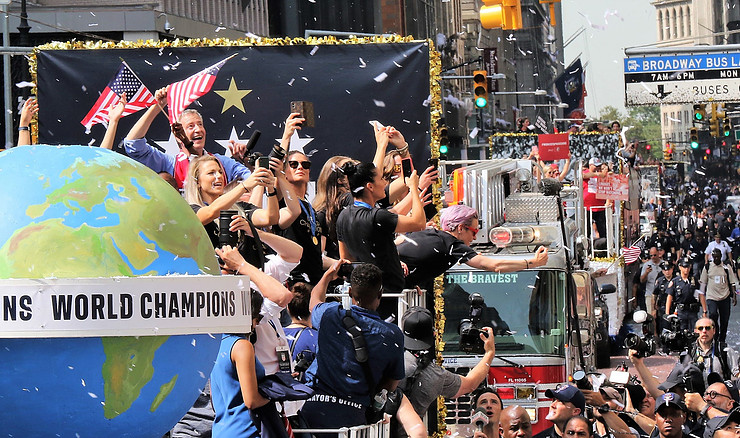 USWNT Celebration and Statement in NYC

The USWNT rode up The Canyon of Heroes, enjoying a ticker tape parade in lower Manhattan as they celebrated their second consecutive and fourth overall FIFA Women’s World Cup Championship. Ticker tape parades, a traditional welcome to New York City reserved for returning heroes, be they World Leaders, War Heroes or more recently Sports Champions, gets its names due to the fact that long thin ribbons of paper or “tape”, printed from a “ticker” during the earlier days of the Stock Market would be tossed from Wall St. offices as a confetti. Long after the ticker had become obsolete shredded documents were substituted. I mention this because, sadly, due to our ever increasingly paperless environment, there was very little actual confetti at this parade as opposed to past ticker tape parades, say Mets circa 1986.

The team, with many members currently involved in a lawsuit demanding equal pay relative to their male counterparts, were welcomed by throngs of fans and supporters.

All along the Parade route there were Calls for Equal Pay from parade goers and street vendors as only New Yorker’s can explain.