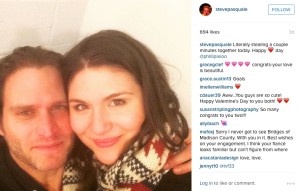 Congratulations to Hamilton star Phillipa Soo, who plays Elizabeth Schuyler Hamilton. She is engaged to Steven Pasquale, The robber who steals with style in the upcoming revival of  The Robber Bridegroom. The pair announced their engagement on Instagram before Hamilton appeared on the Grammys. 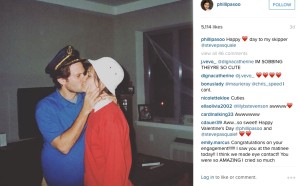 Soo gushed, “In love with this man, I will enjoy spicy noodle soup with him for the rest of my days.” Pasquale added of “my bride to be,” “Workin down the the street from each other.”

The 25 year old actress after graduating from Juilliard in 2012, was cast as Natasha Rostova in the Ars Nova production of Natasha, Pierre & The Great Comet of 1812. The show went on to transfer Off-Broadway to Kazino, a tent custom built for the show. In 2013 she was cast in a small recurring role in the NBC television series Smash as the character Lexi. She appeared in five episodes in the second season before the show’s cancellation. After seeing her in Great Comet, director Thomas Kail and Lin Manuel Miranda asked her to take part in an early 2014 reading of Hamilton.

The 39 year old actor is best known for his role as New York City Firefighter/EMT Sean Garrity in the critically acclaimed series Rescue Me. He made his debut on the HBO series Six Feet Under, playing a love interest for David. Pasquale created the role of Fabrizio in the original Seattle cast of The Light In The Piazza, but his work on Rescue Me prevented him from reprising the role on Broadway. In 2013, Pasquale created the role of Robert Kincaid in The Bridges of Madison County and brought that show to broadway In 2014. Pasquale guest starred in the popular legal drama series premiered on CBS The Good Wife  season 6 as campaign manager Jonathan Elfman. He recently starred in Lyric Opera of Chicago’s Carousel opposite Laura Osnes. He was previously married to actress Laura Benanti.