The groundbreaking, Tony Award- and Pulitzer Prize-winning musical is a re-imagining of Puccini’s “La Bohème,” and set in New York City’s gritty East Village. “Rent” tells the unforgettable story of seven artists struggling to follow their dreams during a time of great social and political turmoil. Winner of four Tony Awards and the Pulitzer Prize, writer/composer Jonathan Larson’s tour de force continues to offer an inspiring message of hope and friendship.

The most interesting part of this casting is Vanessa Hudgens played Mimi Marquez in the Hollywood Bowl production of Rent. See video, now she takes on Maureen Johnson

Below is a cast breakdown:

Actress and musician Kiersey Clemons recently was cast in the upcoming feature installment of “The Flash” franchise as the iconic “Iris West.” Her other credits include the hit Sundance film “Hearts Beat Loud,” “Dope,” “Transparent,” “Neighbors 2: Sorority Rising,” “Flatliners” and “Easy.”  Additionally, she is currently shooting the starring role of “Darling” in the upcoming live-action feature “Lady and the Tramp,” and will join the cast on the upcoming season of “Angie Tribeca.”

Brandon Victor Dixon most recently starred in “Jesus Christ Superstar Live in Concert” for which he was nominated for an Emmy Award and he can currently be seen on the series “Power.” On Broadway, he most recently starred in “Hamilton.”  Previous Broadway credits include “Shuffle Along” (Tony Award nomination), “Motown The Musical” (Grammy nomination), and “The Color Purple” (Tony Award nomination), the national tour of “The Lion King,” off-Broadway productions of “F**king A,” “Rent” and “The Scottsboro Boys.” Television credits include “Law & Order: Criminal Intent,” “One Life to Live,” “The Good Wife,” “Macy’s 4th of July Fireworks Spectacular” and Spike Lee’s “She’s Gotta Have It.” Dixon’s debut single, “#WeAre” is currently available for download on iTunes, with all proceeds benefitting YoungNewYorkers.org. Dixon was raised in Maryland, and is a graduate of Columbia University.

Jordan Fisher recently won the 25th season of “Dancing with the Stars.” He also has starred in “The Secret Life of the American Teenager,” “Liv and Maddie,” “Teen Wolf,” “Teen Beach Movie” and its sequel, before co-starring in FOX’s Emmy-winning “Grease: Live.” In 2016, Fisher released his self-titled EP, which debuted at No. 18 on the Billboard Heatseekers album chart. He collaborated with Lin-Manuel Miranda on “You’re Welcome” from “Moana,” and also joined the cast of the Tony Award-winning musical “Hamilton.” Fisher is in the upcoming reboot of “She-Ra and the Princesses of Power.” He currently co-hosts “Dancing with the Stars: Juniors,” alongside Frankie Muniz.

Vanessa Hudgens began her work in musical theater at a young age, in shows such as “The Wizard of Oz,” “The King & I,” “The Music Man” and “Cinderella.” In 2016, she starred in FOX’s “Grease: Live,” which was nominated for 10 Emmys and won five, the most ever for a Special Class program. In 2015, she made her Broadway debut, starring in the title role of the beloved Academy Award- and Tony Award-winning film and stage musical “Gigi.” Her film credits include “Thirteen” and “Spring Breakers,” and the upcoming “Second Act.” Her television credits include “High School Musical” and the action comedy “Powerless,” set in the DC universe. In 2010, Hudgens won the ShoWest Award for “Female Star of Tomorrow.”

Brennin Hunt is currently filming his first movie role in “Walking With Herb.” The movie is set for release in 2019, and will feature Hunt’s original song, “Can’t Hold a Candle.” Hunt began his songwriting career with “I Can’t Do This,” which was recorded and co-written by Vince Gill. In 2016, he was featured in Rolling Stone Country as one of the 10 Artists You Need To Know. In 2017, he partnered with YWCA for his single, “Rip off the Rearview,” featuring Gill.

Mario is a Grammy Award-nominated, multi-Platinum-selling singer, songwriter, producer and actor.  He was discovered at the age of 11 and, three years later, signed a recording contract with music legend Clive Davis. Mario’s eponymous debut studio album rolled out in 2002, featuring his first Top Five R&B/pop hit, “Just a Friend 2002.” Two years later, Mario revisited the Billboard charts with “Turning Point.” The Platinum-selling album spun off the melodic double-Platinum Hot 100 chart-topper “Let Me Love You,” and placed Mario on Billboard magazine’s Artist of the Decade list. Rounding out Mario’s album catalog are 2007’s “Go,” featuring the Gold-certified single “Crying Out for Me”; and 2009’s “D.N.A.,” for which the lead single, “Break Up,” with guests Sean Garrett and Gucci Mane, also went Gold and peaked at No. 2 on Billboard’s Hot R&B/Hip-Hop Songs chart/No. 14 on the Billboard Hot 100. Now, Mario is back with the release of his eagerly awaited fifth studio album, “Dancing Shadows,” which debuted at No. 1 on the iTunes R&B/Soul chart. He also currently has a recurring role on FOX’s EMPIRE. 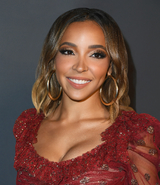 Music artist Tinashe broke into the R&B spotlight in 2014 with her double-Platinum hit, “2 On,” which landed in the Top 20 on the Billboard Top 200 chart. She has toured with Katy Perry, Nicki Minaj and Maroon 5. She also has an established career in fashion, where she has worked with brands such as Alexander Wang, Ralph Lauren, Chanel and Juicy Couture. Tinashe recently released her sophomore album, “Joyride.”

Valentina is known for competing on the ninth season of Emmy winning “RuPaul’s Drag Race” and will return to “RuPaul’s Drag Race All Stars.” He was awarded the Miss Congeniality award, voted by the fans. Valentina has appeared in Elle magazine Mexico, Paper magazine and Vogue.com, as well as on Andy Cohen’s “Watch What Happens Live” and “Access Hollywood.” He currently is the face of Mexican fashion designer Benito Santos’ latest collection.

Keala Settle most recently portrayed bearded woman “Lettie Lutz” in the feature musical “The Greatest Showman.” The film’s song, “This Is Me,” won the 2018 Golden Globe Award for Best Original Song and was nominated for the Academy Award for Best Original Song. Settle made her Broadway debut in 2011 in “Priscilla, Queen of the Desert.” She originated the role of “Norma Valverde” in “Hands on a Hardbody” and was nominated for the Outer Critics Circle Award, Drama Desk Award and Tony Award for Best Featured Actress in a Musical. Settle originated the role of “Becky” in the musical “Waitress,” and played the roles of “Madame Thenardier” in the revival of “Les Misérables” and “Tracy Turnblad” in the national tour of “Hairspray.”

Jonathan Larson received the 1996 Pulitzer Prize for Drama for “Rent” (Book, Music, Lyrics). He also won the 1996 Tony Award for Best Musical and the 1994 Richard Rodgers Award for “Rent” and twice received The Gilman & Gonzales-Falla Theatre Foundation’s Commendation Award. In 1989, he was granted the Stephen Sondheim Award from American Music Theatre Festival, where he contributed to the musical “Sitting on the Edge of the Future.” In 1988, he won the Richard Rodgers Development Grant for his rock musical, “Superbia,” which was staged at Playwrights Horizons. He composed the score for the musical “J.P. Morgan Saves the Nation,” which was presented by En Garde Arts in 1995. Larson performed his rock monologue, “tick, tick. . . BOOM!,” at Second Stage Theatre, The Village Gate and New York Theatre Workshop. In addition to scoring and song writing for “Sesame Street,” he created music for a number of children’s book-cassettes, including Steven Spielberg’s “An American Tail” and “Land Before Time.” Other film scores include work for Rolling Stone magazine publisher Jann Wenner. He conceived, directed and wrote four original songs for “Away We Go!,” a musical video for children. “Rent,” his rock opera based on “La Boheme,” had its world premiere on February 13, 1996, at New York Theatre Workshop. Larson died unexpectedly of an aortic aneurysm on January 25, 1996, ten days before his 36th birthday.

Marc Platt is the Emmy Award-winning producer of FOX’s “Grease: Live” and “A Christmas Story Live!.” Most recently, he produced “Jesus Christ Superstar Live in Concert,” which earned 13 Emmy Award nominations. He is an Academy Award-nominated producer, known for director Damien Chazelle’s “La La Land” and Steven Spielberg’s “Bridge of Spies.” Platt has developed some of the most successful film, theater and television projects of the last 30 years. His film resume includes such titles as “Legally Blonde,” “Into the Woods,” “Drive,” “Rachel Getting Married,” “Scott Pilgrim” and “Wanted.” He is also the producer of the Broadway mega-hit “Wicked,” which has been seen by more than 50 million fans worldwide and globally has racked up $4 billion. A former film executive, Platt served as president of production for three movie studios, where he oversaw box office and critical successes, including “Philadelphia,” “Rudy,” “As Good As It Gets,” “Legends of the Fall” and “The Silence of the Lambs.”