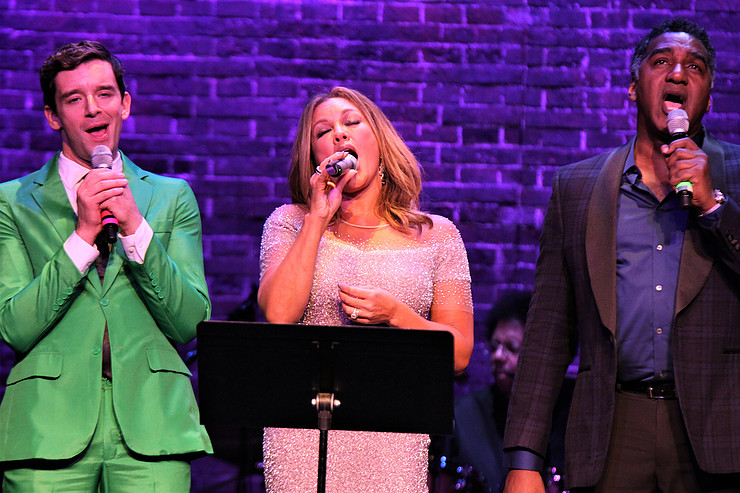 Michael Urie, Vanessa Williams and Norm Lewis belt out the finale at Thankful for Christmas a benefit concert held at and for The Sheen Center. Photo by Brian Hester

The best time of year in the greatest city in the world has officially begun as Vanessa Williams and Friends Sold Out show Thankful For Christmas filled the City with the sounds of the season last evening at The Sheen. The show featuring Vanessa Williams and a group of close friends, Michael Urie, Norm Lewis, Bernie Williams and Cardinal Dolan helpped to ring in the the Christmas season with this fantastic super amazing show featuring many of Vanessa’s classic hits as will as many of her holiday favorites.

As the show was sold out well in advance Vanessa was kind enough to share the first and final songs with us via the clips below. With the show Ms. Williams seamlessly melded together the hot Latin jazz guitar of former New York Yankees legend and Grammy nominated musician Bernie Williams, no relation, with the classic Broadway styling of Norm Lewis and an amply amount of her own classic hit songs as well a heaping does of all time Christmas favorites. Michael Urie delivered a reading of the Dr. Seuss classic The Grinch Stole Christmas accompanied masterfully by Rob Mathes tickling the ivories.

In addition to being an incredibly talented bunch of musicians this group is also remarkably friendly and down to earth. Everyone I had a chance to ask smiled and posed for selfies. I did not have the chance to ask Norm Lewis nor Cardinal Dolan at this function but they too have stopped for a selfie with yours truly at past events in New York City.

Hats off to all involved in this amazing fund raiser for The Sheen Center The beautiful and amazingly talented Vanessa Williams put together a top notch show with a group of gifted and generous performers for a wonderful staple of Theater and culture in New York City. Giving this Christmas Show 5 out of 5 Starts!!!!! Merry Christmas to All and To All a Good Night Brian Hester Reporting Live.