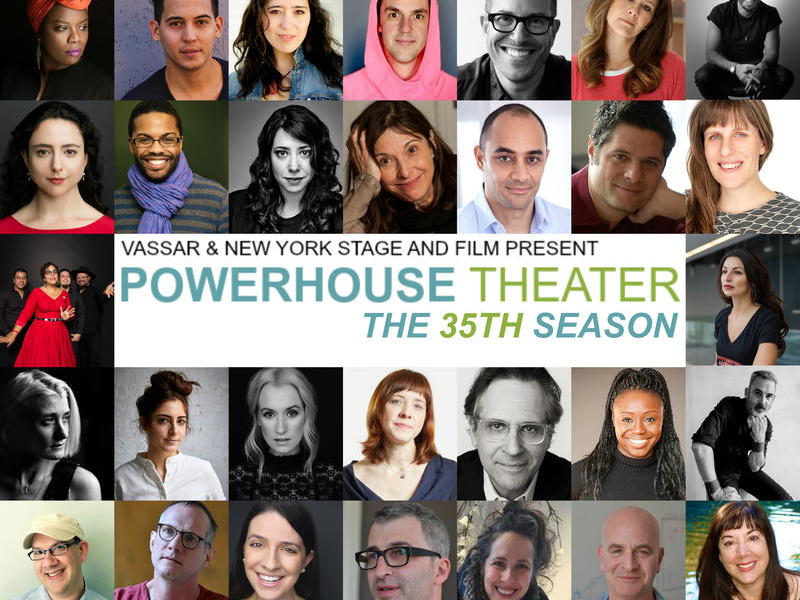 Additional casting of the 2019 Powerhouse Season will be announced shortly.

For tickets and more information on the season, visit Powerhouse.Vassar.edu

Vassar & New York Stage and Film’s Powerhouse collaboration continues to be the launching pad for some of the most groundbreaking new works for the American theater, with countless subsequent productions in New York City, regionally and internationally. Notably, Lin-Manuel Miranda’s Hamilton and Stephen Karam’s The Humans—the 2016 Tony® winners for Best Musical and Best Play, respectively—received early development at Powerhouse, and Powerhouse presented first-look productions of two daring new works that were named finalists for the 2017 Pulitzer Prize for Drama: Sarah DeLappe’s The Wolves, which moved directly from its Powerhouse premiere to celebrated runs at The Playwrights Realm and Lincoln Center Theater in NYC; and Taylor Mac’s A 24-Decade History of Popular Music. They are joined by dozens of other celebrated recent projects that trace their roots to Powerhouse and New York Stage and Film, including: Hadestown, the Anaïs Mitchell musical currently on Broadway; the Lynn Nottage/Duncan Sheik/Susan Birkenhead musical The Secret Life of Bees off-Broadway at Atlantic Theater Company; the Duncan Sheik/Steven Sater/Jessie Nelson musical Alice By Heart off-Broadway at MCC Theater; Halley Feiffer’s The Pain of My Belligerence off-Broadway at Playwrights Horizons; the David Bryan/Joe DiPietro musical Diana at La Jolla Playhouse; Colman Domingo’s Lights Out: Nat “King” Cole at the Geffen Playhouse; Maddie Corman’s Accidentally Brave off-Broadway at DR2; Tim Blake Nelson’s Socrates off-Broadway at The Public Theater; Brian Quijada’s Kid Prince and Pablo at The John F. Kennedy Center for the Performing Arts; and many more.

Jonah is a dancer.
Jonah is injured.
Jonah has an ex-boyfriend.

When a former lover resurfaces, re-opening a painful wound, Jonah is forced to turn to his funny, precocious daughter and tough-love grandmother for support. A brutal and lyrical portrait of the things we hang on to and the price of moving forward, this Relentless Award-winning play tells of one man’s attempt to free himself from the abuses of his past.

Lightning (or The Unbuttoning) (July 18-28) by Beth Henley, directed by Mark Brokaw

In a cabin high on a peak surrounded by the blue mountains and a vibrant, swirling sky, a young woman is visited by a traveling salesman as a lightning storm brews. A mysterious, mystical visitor, he awakens in her the promise and the peril of something more. Pulitzer Prize-winner Beth Henley returns to Powerhouse with this story of resilience and determination in an unforgiving world.

Lightning was developed in part through NYSAF’s 2017 NYC Reading Series.

The musical workshop presentations, in the Vogelstein Center for Drama & Film’s Martel Theater will include three exciting new projects:

An otherworldly journey into the jagged heart of rust-belt Ohio, where blue monkeys play in the wreckage of post-industrial America, and where high school boy Jack Scan is in love with the prettiest girl in town. This timely adaptation of Mac Wellman’s wry, surrealist coming-of-age story, adapted by Tony Award-winner Rachel Chavkin (Hadestown, The Great Comet) and Obie Award-winner Heather Christian (Animal Wisdom), travels through time and space, to Mars and back again as it tries to make sense of the forces lurking in the American woods.

You can die, you just have to answer a few crazy questions first. And sing. And dance.

A young girl attempts suicide and wakes up trapped in a cosmic vaudevillian game show that she must win in order to enter the void of death. But the more she wants to die, the harder she has to work. A new musical of why to exist when you no longer want to, with up-tempo genre-bending songs and a healthy dose of the absurd from the creators of Futurity.

A young man returns home to the African coastal city of Mombasa, Kenya, to marry his betrothed and step into his family’s political dynasty. But when he visits Moto Moto – a steamy afro-jazz club and the stomping ground of his youth – he finds himself drawn to a beautiful, mysterious new singer. Soon, he must decide whether to fulfill the legacy of his lineage, or give in to his love of music and a newfound attraction. A story of love, destiny, the spirit world, and the power of passion, inspired by the ancient myth of Marimba, the goddess of music.

This summer’s ‘Inside Look’ Workshops to be presented in the Martel Theater and Susan Stein Shiva Theater are:

The story of Ben, a young hacktivist federally incarcerated for digital civil-disobedience, who attempts to bring the entire US Judiciary to its knees from the inside. While he creates computer code he thinks will combat totalitarianism, his mother attempts to negotiate for his freedom and mental health. The first of a cycle of plays by celebrated theater, film, and television writer Zach Helm set in the world of international cyber-espionage and the human lives it has torn apart.

…and the horse you rode in on received initial development as part of NYSAF’s 2018 NYC Reading Series.

A daughter’s road trip with her father becomes a theatrical journey across more than just state lines. This funny, wise, and heartbreaking debut from an exciting new writer will be brought to vibrant life by director Daniel Aukin.

This summer’s readings will include free public presentations of works in progress, including:

The Notebook, based on the novel by Nicholas Sparks, music and lyrics by Ingrid Michaelson, book by Bekah Brunstetter, directed by Michael Greif (June 23 at 3pm)

Becky Nurse of Salem by Sarah Ruhl (July 19 at 8pm)

Delusion by Proxy by Brooke Adams, directed by Ethan Silverman (July 20 at 12pm)

The Excavation of Mary Anning by Ian August, directed by Sammi Cannold (July 21 at 4pm)

Additional projects and artists in residence include Williamsburg, book by Jason Katims, music by Tom Kitt, lyrics by Marcy Heisler; Like Water For Chocolate, a new musical adaptation of Laura Esquivel’s novel by Lisa Loomer and La Santa Cecilia, directed by Michael Mayer; and the Lark Play Development Center.

Members of the noted Powerhouse Theater Training Program will present William Shakespeare’s Romeo and Juliet (July 12-14) adapted and directed by Devin Kawaoka, and The Winter’s Tale (July 19-21) adapted and directed by Andrew Willis-Woodward, both at the Environmental Cooperative at the Vassar Barns. Members of the Training Company will present Keep Your Head Above Water so as Not to Sink: A Soundpainting Performance

(July 4, 11, 18, 25), composed and directed by Max Reuben, at the Frances Lehman Loeb Art Center; Workshop Performances of From One to Another: Rites of Passage for our Times (July 21-22), created and directed by Emily Mendelsohn, with members of the Training Company; as well as the New Works Play Festival (July 27), written and directed by members of the Training Company. Young actors, playwrights, and directors from around the country and internationally, along with an exceptional faculty of artists, comprise this important component of the Powerhouse artistic community. For updated Training Company production and workshop information, please visit powerhouse.vassar.edu/apprentices.

In addition to the aforementioned artists and projects, New York Stage and Film’s Filmmakers’ Workshop will be on campus for the annual Summer Residency. During the residency, early-career screenwriters and TV writers engage in one-on-one feedback sessions with professional mentors, panel discussions, screenings, developmental readings, and production discussions designed to bring their projects closer to completion. In keeping with the collaborative spirit of the Powerhouse Season, they form a unique cohort and are active participants in the Powerhouse community. Writers and projects will be announced in June.

Now in its 35th year, Powerhouse Theater is a collaboration between Vassar College and New York Stage and Film dedicated to both emerging and established artists in the development and production of new works for theater and film. The Powerhouse program consists of an eight-week residency on the Vassar campus during which more than 350 professional artists and 50 students in the Powerhouse Training Program live and work together to create new theater works. In 2018/19, ten projects premiered in New York City that had been developed by New York Stage and Film: Hadestown (Broadway); Head Over Heels (Broadway); Alice By Heart and Transfers (MCC Theater); India Pale Ale (Manhattan Theatre Club); The Secret Life of Bees(Atlantic Theater Company); The Pain of My Belligerence (Playwrights Horizons); Accidentally Brave (DR2); Joan (Colt Coeur); No One Is Forgotten (Rattlestick); and Socrates (The Public). Other projects developed at the Powerhouse include the Tony Award-winning Side Man and Tru; the multi-award-winning Doubt by John Patrick Shanley; the groundbreaking Broadway musical American Idiot; and A Steady Rain.

New York Stage and Film (Johanna Pfaelzer, Artistic Director; Christopher Burney, Incoming Artistic Director; Thomas Pearson, Executive Director; Mark Linn-Baker, Max Mayer, Leslie Urdang, Producing Directors) is a not-for-profit company dedicated to both emerging and established artists in the development of new works for theater and film. Since 1985, New York Stage and Film has played a significant role in the development of new plays, provided a home for a diverse group of artists free from critical and commercial pressures, and established itself as a vital cultural institution for residents of the Hudson Valley and the New York metropolitan region www.newyorkstageandfilm.org.

Vassar College (Ed Cheetham, Michael Sheehan, Producing Directors) is a highly selective, coeducational, independent, residential, liberal arts college founded in 1861. Consistently ranked as one of the country’s best liberal arts colleges, Vassar is renowned for its long history of curricular innovation, and for the natural and architectural beauty of its campus. More than 50 academic departments and degree programs — from Anthropology to Cognitive Sciences to Urban Studies — encompass the arts, foreign languages, natural sciences, and social sciences, and combine to offer a curriculum of more than 1,000 courses. Vassar College is sited in New York’s beautiful Hudson Valley in Poughkeepsie, NY.  www.vassar.edu