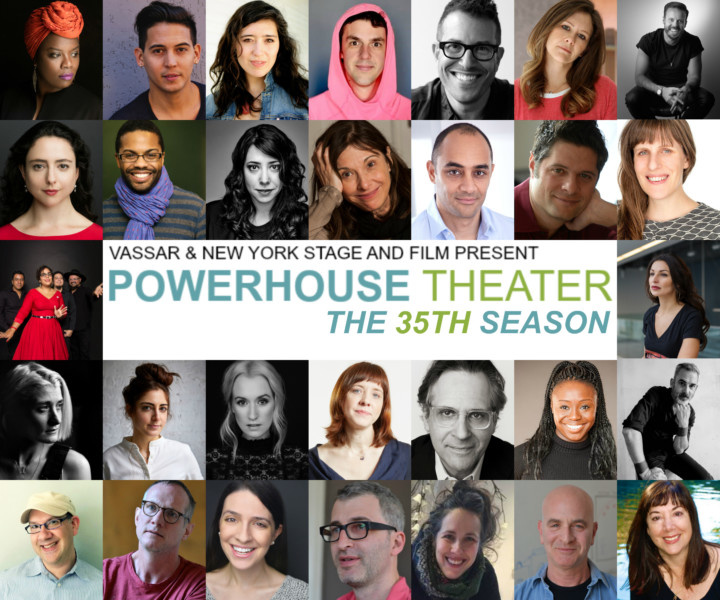 Vassar & New York Stage and Film announce the programming lineup for their upcoming 35th Powerhouse Season, the annual summer season that brings together some of today’s most influential theatrical voices for fully-staged productions, workshop presentations, readings, and other works in progress for theater, film and television.

Jonah is a dancer.
Jonah is injured.
Jonah has an ex-boyfriend.

When a former lover resurfaces, re-opening a painful wound, Jonah is forced to turn to his funny, precocious daughter and tough-love grandmother for support. A brutal and lyrical portrait of the things we hang on to and the price of moving forward, this Relentless Award-winning play tells of one man’s attempt to free himself from the abuses of his past.

In a cabin high on a peak surrounded by the blue mountains and a vibrant, swirling sky, a young woman is visited by a traveling salesman as a lightning storm brews. A mysterious, mystical visitor, he awakens in her the promise and the peril of something more. Pulitzer Prize-winner Beth Henley returns to Powerhouse with this story of resilience and determination in an unforgiving world.

Lightning was developed in part through NYSAF’s 2017 NYC Reading Series.

The musical workshop presentations, in the Vogelstein Center for Drama & Film’s Martel Theater will include three exciting new projects:

An otherworldly journey into the jagged heart of rust-belt Ohio, where blue monkeys play in the wreckage of post-industrial America, and where high school boy Jack Scan is in love with the prettiest girl in town. This timely adaptation of Mac Wellman’s wry, surrealist coming-of-age story, adapted by Obie Award-winning artists Rachel Chavkin (Hadestown, The Great Comet) and Heather Christian (Animal Wisdom), travels through time and space, to Mars and back again as it tries to make sense of the forces lurking in the American woods.

You can die, you just have to answer a few crazy questions first. And sing. And dance.

A young girl attempts suicide and wakes up trapped in a cosmic vaudevillian game show that she must win in order to enter the void of death. But the more she wants to die, the harder she has to work. A new musical of why to exist when you no longer want to, with up-tempo genre-bending songs and a healthy dose of the absurd from the creators of Futurity and the frontman of The Lisps.

A young man returns home to the African coastal city of Mombasa, Kenya, to marry his betrothed and step into his family’s political dynasty. But when he visits Moto Moto – a steamy afro-jazz club and the stomping ground of his youth – he finds himself drawn to a beautiful, mysterious new singer. Soon, he must decide whether to fulfill the legacy of his lineage, or give in to his love of music and a newfound attraction. A story of love, destiny, the spirit world, and the power of passion, inspired by the ancient myth of Marimba, the goddess of music.

This summer’s ‘Inside Look’ Workshops to be presented in the Martel Theater and Susan Stein Shiva Theater are:

The story of Ben, a young hacktivist federally incarcerated for digital civil-disobedience, who attempts to bring the entire US Judiciary to its knees from the inside. While he creates computer code he thinks will combat totalitarianism, his mother attempts to negotiate for his freedom and mental health. The first of a cycle of plays by celebrated theater, film, and television writer Zach Helm set in the world of international cyber-espionage and the human lives it has torn apart.

…and the horse you rode in on received initial development as part of NYSAF’s 2018 NYC Reading Series.

A daughter’s road trip with her father becomes a theatrical journey across more than just state lines. This funny, wise, and heartbreaking debut from an exciting new writer will be brought to vibrant life by director Daniel Aukin.

This summer’s readings will include free public presentations of works in progress, including:

The Notebook, based on the novel by Nicholas Sparks, music and lyrics by Ingrid Michaelson with book by Bekah Brunstetter

The Excavation of Mary Anning by Ian August, directed by Sammi Cannold

Tuvalu or, The Saddest Song by Antoinette Nwandu, directed by Danya Taymor

The Paper Dreams of Harry Chin by Jessica Huang

Delusion by Proxy by Brooke Adams, directed by Ethan Silverman

Additional projects and artists in residence include Williamsburg, book by Jason Katims, with music and lyrics by Tom Kitt; Like Water For Chocolate, a new musical adaptation of Laura Esquivel’s novel by Lisa Loomer and La Santa Cecilia, directed by Michael Mayer; and the Lark Play Development Center.

Members of the noted Powerhouse Theater Training Program will present William Shakespeare’s Romeo and Juliet (July 12-14) adapted and directed by Devin Kawaoka, and The Winter’s Tale (July 19-21) adapted and directed by Andrew Willis-Woodward, both at the Environmental Cooperative at the Vassar Barns. Members of the Training Company will present Keep Your Head Above Water so as Not to Sink: A Soundpainting Performance

(July 4, 11, 18, 25), composed and directed by Max Reuben, at the Frances Lehman Loeb Art Center; as well as Workshop Performances of From One to Another: Rites of Passage for our Times (July 21-22), created and directed by Emily Mendelsohn, with members of the Training Company. Young actors, playwrights, and directors from around the country and internationally, along with an exceptional faculty of artists, comprise this important component of the Powerhouse artistic community. For updated Training Company production and workshop information, please visit powerhouse.vassar.edu/apprentices.

In addition to the aforementioned artists and projects, New York Stage and Film’s Filmmakers’ Workshop will be on campus for the annual Summer Residency. During the residency, early-career screenwriters and TV writers engage in one-on-one feedback sessions with professional mentors, panel discussions, screenings, developmental readings, and production discussions designed to bring their projects closer to completion. In keeping with the collaborative spirit of the Powerhouse Season, they form a unique cohort and are active participants in the Powerhouse community. Writers and projects will be announced in June.

Additional projects will be announced at a later date. Subscriptions will be available online May 9, and single tickets will go on sale online May 14.