Veronica Swift a Jazz Artist on The Rise

Veronica Swift a Jazz Artist on The Rise 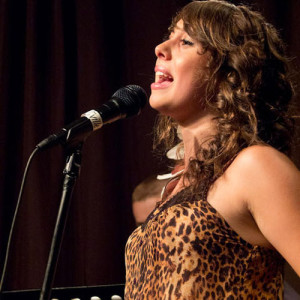 At 21, jazz vocalist Veronica O’Brien (stage name Veronica Swift) is a seasoned pro, with two albums as a leader (and a number of others as an accompanist) under her belt. Veronica was selected through a nationwide audition in the summer of 2011 as the first singer to be part of the Telluride Jazz All-Star Band for a performance at the legendary Colorado music festival. Her style recalls Peggy Lee.

Veronica has headlined at Dizzy’s Club Coca-Cola, Jazz at Lincoln Center in New York City, Blues Alley in Washington, D.C., and with her parents at the Jazz Standard in NYC, as well as numerous festivals and clubs around the country. In the spring of 2011, she was the featured singer at the premier of trumpeter John D’Earth’s “Ephemera” symphony at the Paramount Theater in Charlottesville, VA and performed with the 2012 Grammy Jazz Choir.

Veronica is the daughter of the exceptional jazz vocalist Stephanie Nakasian and the fabulous jazz pianist Hod O’Brien.  She recently was the First Runner-Up in the Thelonious Monk International Vocal Competition. Veronica will be graduating in December from the Frost School of Music at the University of Miami (Florida) where she is a jazz vocal major who is attending on a full scholarship. Veronica was on the programs hosted on Wednesday and Thursday of this week at Jazz at Lincoln Center hosted by Michael Feinstein.
On March 5 she was featured at the Tribeca Performing Arts Center.
Related ItemsDizzy’s Club Coca-ColaHod O'BrienJazz at Lincoln Centerjazz pianistJazz StandardMichael FeinsteinNewPeggy LeeStephanie NakasianThelonious Monk International Vocal CompetitionTimes Square ChroniclesVeronica Swift
Cabaret