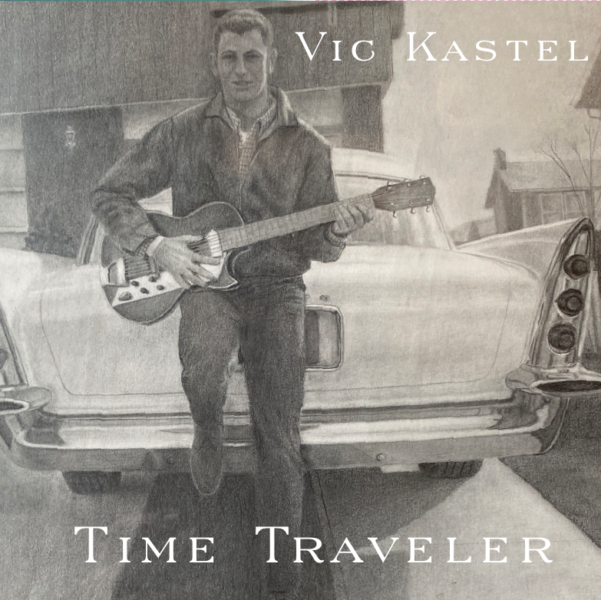 Songwriting is an extraordinary gift. From the concept of a song to the actual recording it is a labored and time-sensitive process. Vic Kastel, who has just released his first solo album, the 13-track Time Traveler (Island Avenue Records), knows first-hand, the process. Kastel, who recorded of the material live (as did Bruce Springsteen with his latest release) approaches songwriting as art form:We spoke to him recently via Zoom about his process:

A: My process is a combination of imagination, observation, my own history, including titles, phrases, and, emotions. Then comes the hard work of crafting the spark of an idea, shaping lyrics, melody and harmony.

Q: Is there one genre that you feel most comfortable with?

A: The various genres on my album represent the many styles that have influenced me. The style of the song seems to be inherent in the writing, kind of a natural flow, and I enjoy every one from Reggae to Rock, acoustic to doo-wop.

Q: Who are your favorite artists?

A: I would have to include songs from BB King , Muddy Waters, the Beatles, Little Richard up to today including “Stay With Me’ Sam Smith and even Pharrell Williams and Harry Styles. I have a wide range of influences including jazz and classical music.

Q: What artists would you like to write for?

Q: Tell us about the first single off the album “First Impressions.”

A: I collaborated with Larry Vannata who had a version of that song he was unable to finish. I rewrote most of it lyrically and harmonically and just kept the original bridge. When I did the rewrite I had Elvis in mind to sing it, so I kept that concept through the recording process. It seems to work really well.

Q: You recorded most of the album live at the late-great A&R Studios. Tell us about that experience.

A: I love the concept of a live performance and the synergy created by the live band performing the songs like we were on stage works so well. There were very few overdubs and I know the tracks sound vibrant and fresh because of that approach. At the time A&R was the premier studio in Manhattan. Billy Joel, Elton John and Paul Simon all recorded there. Phil Ramone had the studio built to his specs, being an engineer as well as a Julliard violinist.  We all played great due to the atmosphere and our excellent engineer David Smith.

Q: What other studios did you work at in NYC?

A: As a working musician I had the chance to play in many top studios including Electric Lady, The Hit Factory, Plaza Sound at Rockefeller Center, and, Nola, to name a few.

Q: Tell us about Long Island. I many don’t realize it was a hotbed of musical talent.

A: Billy Joel, Lou Reed, Debbie Gibson, Joan Jett were all perfecting their talents there. There were many bands with various combinations of players all looking for the right combination. I was lucky to be in band, The Axents, getting the chance to play with many major recording artist on L.I. at the better clubs including Patti LaBelle, Wilson Picket, Jackie Wilson, and, The Drifters. We would also go out to hear the other groups; especially at the legendary My Father’s Place in Roslyn. There were just so many clubs, from the North Shore to the South Shore and they had the premiere acts around. It truly was an exciting time in those days.

Q: Before the pandemic you played in an Island production of Joseph and the Amazing Technicolor Dreamcoat.

A: Yes, just a terrific show. Each performance was most memorable.

Q: Tell us about the craft of songwriting?

A: It’s a gift; to be able to craft a song, capturing that memory or feeling is an amazing ability for sure.

G. H. HARDINGFebruary 3, 2023
Read More
Scroll for more
Tap
What To Watch November 29th To Take Away The Blues
Musicals That Said So Much: Leap of Faith