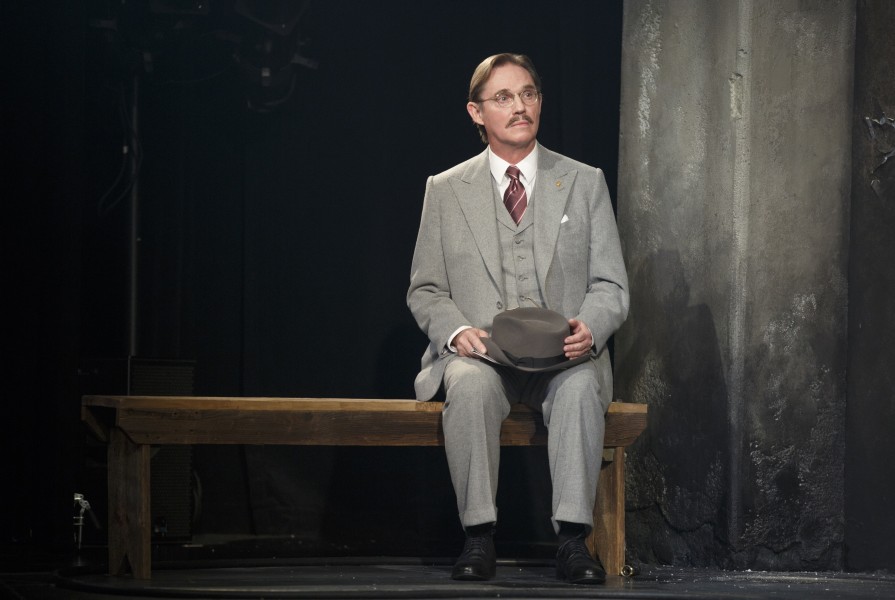 The theme of this year’s roundtable, Theatre on and off the stage, focuses on theatre and its impact in daily life, from workforce culture to activism to building community. The confirmed panelists all share a passion for the power of storytelling and how it reflects and influences our world.

The Roundtable will also serve as a kick-off for the 2019 Theatre Forward Chairman’s Awards Gala, which will be held on Monday, April 8 at The Pierre Hotel, honoring Bryan Cranston, Dorsey & Whitney LLP, and Pamela Farr and Buford Alexander.

Victoria Clark maintains a remarkable career as actor, teacher, and director. Her acting career began when a casting director saw her present material at New York University and cast her in the original Broadway production of Sunday in the Park with George. Since then, she has co-starred in twelve Broadway shows, and countless off-Broadway and regional productions. Victoria received the 2005 Tony, Drama Desk and Outer Critics Circle Awards for her portrayal of Margaret Johnson in The Light in the Piazza, and received three additional Tony nominations for Sister Act, Cinderella, and Gigi. Clark has directed the Conor McPherson drama, The Dance of Death which is currently being presented at the Classic Stage Company theater. Prior to that she directed the world premiere of Scaffolding for “Inner Voices”. In 2016, she directed Newton’s Cradle (New York Musical Theater Festival, Best Musical & Best Director), The Trouble With Doug (Fredericia Theater in Denmark), Hansel and Gretl and Heidi and Günther (Village Theater Festival of New Musicals), Mary Jo Shen’s Paper Piano. She recently directed the short film For Me & My Gal for NikoFrank Productions. Ms. Clark has taught in numerous universities including Yale University and Juilliard. She was the Artist-In-Residence for Pace University, where she directed The Light in the Piazza. She is currently creating a solo autobiographical play. She serves on the Board of Trustees for the Kurt Weill Foundation and New York City Center. She resides in Manhattan with her husband Tom Reidy, and their Golden Retriever, Ollie.

Julie Halston appeared on Broadway most recently in Scott Ellis’ revival of George S. Kaufman and Moss Hart’s You Can’t Take It With You, earning the Actors Equity Richard Seff Award as well as Drama Desk Award and Outer Critics Circle Award nominations.  She has also been seen on Broadway in On the Town, Anything Goes, Hairspray, Gypsy, and Twentieth Century, for which she received an Outer Critics Circle Award nomination.  Halston is a founding member of Charles Busch’s legendary theatre company Theatre in Limbo, and has co-starred with Mr. Busch in numerous productions including Vampire Lesbians of Sodom, The Tribute Artist, and her Drama Desk Award nominated performances in The Divine Sister andRed Scare on Sunset.  She was last seen off-Broadway in Richard Greenberg’s The Babylon Line at Lincoln Center Theater.  Halston recently starred in both the McCarter Theater Center and Hartford Stage’s sold out productions of Agatha Christie’s Murder on the Orient Express.  Regionally, she has appeared in the Huntington Theatre Company’s adaptation of A Confederacy of Dunces and the Kennedy Center production of The Guardsman.  She has appeared on television in a variety of series including Difficult People, Woody Allen’s Crisis in Six Scenes, and Law & Order: SVU.  She is best known to television audiences for her roles as Bitsy Von Muffling from Sex and the City and Tina Carmello from The Class.  She is a frequent co-host of the Emmy Award winning television series Theater Talk.  In addition to her many award winning solo comedy performances, including her off-Broadway hit Julie Halston’s Lifetime of Comedy, Miss Halston was honored with a Lifetime Achievement Award from the Off-Broadway Alliance.

Jill Simonson Luciano joined Southwest Airlines after a near-decade long tenure in New York City’s non-profit community. As Regional Leader of Community Affairs at Southwest, she connects the company to local and national community-based organizations and helps to champion their missions. Because of her efforts, in 2015, Jill was honored for Outstanding Achievement in Serving Disadvantaged Communities through Corporate Philanthropy and Volunteerism from City & State NY. She is an alumna of the Big Brothers Big Sisters of New York City program, and is committed to mentoring many young professionals and students throughout the city. Jill serves on the Board of Directors for the Manhattan Chamber of Commerce and the Council for Airport Opportunity. She is a graduate of S.I. Newhouse School of Public Communications at Syracuse University, and lives in Brooklyn with her husband and son.

Jennifer Ashley Tepper is the Producer of the musical Be More Chill, which played a sold-out engagement off-Broadway in 2018 and is transferring to Broadway this February. The project is part of a decade-long collaboration with the group known as Joe Iconis & Family. She is also the Creative and Programming Director at Feinstein’s/54 Below, where she has curated or produced over 3000 shows, including musicals in concert, original solo acts, theatrical reunions, songwriter celebrations, and more. Tepper’s leadership at the venue has gained praise from publications including The Huffington Post, The New York Times, Buzzfeed, Playbill, Newsday, the New York Post, and more. She is the co-creator of the Bistro Award-winning concert series, If It Only Even Runs A Minute, now in its 9th year. Tepper is also the conceiver and director of The Jonathan Larson Project, a song cycle of Larson’s unheard work, which received its world premiere in 2018 and recently recorded an original cast album. As a writer, Tepper has authored three volumes of The Untold Stories of Broadway series, published by Dress Circle. NBC New York has called the books an “inspiring Must-Read”. On Broadway, Tepper has worked on [title of show], The Performers, Godspell, Macbeth, and The Parisian Woman. Tepper was named one of the 10 professionals on Backstage Magazine‘s “1st Annual Broadway Future Power List”, which stated: “Proving herself both a zeitgeist predictor and theatrical historian with her eclectic programming, Tepper is leading the conversation on contemporary musical theatre.”

Richard Thomas appeared recently in Roundabout’s The Little Foxes, in Michael Frayn’s Democracy and As You Like It in Central Park. Prior New York appearances include Terrence McNally’s The Stendhal Syndrome (Primary Stages), Edward Albee’s Everything in the Garden and Tiny Alice,Steve Tesich’s Square One (Second Stage), Lincoln Center Theater’s The Front Page, Landford Wilson’s Fifth of July, Mary Drayton’s The Playroomand his Broadway debut, Sunrise at Campobello in 1958. He has performed a variety of classical roles around the country, including Hamlet, Richard III and Peer Gynt for Mark Lamos (Hartford Stage); Richard II for Michael Kahn (the Shakespeare Theatre), Puck in A Midsummer Night’s Dream and Angelo in Measure for Measure for Sir Peter Hall (the Ahmanson); The Count of Monte Cristo for Peter Sellars (Kennedy Center); and Danton’s Deathfor Robert Wilson (the Alley). He also appeared twice in Art in London’s West End. He has starred in more than 40 films for television, including Terrence McNally’s “Andre’s Mother” and the upcoming “Wild Hears” for Hallmark, and has appeared in a range of theatrical films including Winning, Last Summer, Red Sky at Morning, 9/30/55 and Wonder Boys. His television series have included “It’s a Miracle,” “Just Cause” and “The Waltons,” for which he won an Emmy Award in 1972. Mr. Thomas lives in New York with his wife Georgiana and their children, Montana and Kendra.

An award nominated actor, Brandon Uranowitz will star as Larry in the highly anticipated Broadway revival of Lanford Wilson’s Burn Thisalongside Adam Driver and Keri Russell. He is a two-time Tony Award nominee for his performances in An American in Paris and Falsettos. In 2018, Uranowitz was acclaimed for his starring roles as Otto Kringelein in Grand Hotel at New York City Center Encores!, and Itzik in the Tony Award winning Best Musical The Band’s Visit. Other Broadway credits include Prince of Broadway, a celebration of the work of Hal Prince, co-directed by Mr. Prince and Susan Stroman at Manhattan Theatre Club, and Baby, It’s You! After studying drama at NYU Tisch, Brandon joined the national touring company of Rent, directed by Michael Greif. Regionally, Brandon was nominated for a Helen Hayes Award for starring as Arnold Beckoff in Torch Song Trilogyat Washington DC’s Studio Theatre. He also starred as Eugene in Neil Simon’s Broadway Bound, at the Old Globe. Upcoming film credits include, “The Kitchen,” starring Melissa McCarthy, and “Stage Fright.” On television, Uranowitz has a recurring role in season two of “The Marvelous Mrs. Maisel.” Additionally, he has made guest starring appearances on “Dietland”, “Blue Bloods,” “Inside Amy Schumer” and “Law & Order: Criminal Intent.”

Bruce E. Whitacre has been Executive Director of Theatre Forward, which advances American Theatre and its communities through philanthropic and sponsorship programs, since 2002. Theatre Forward, which represents 19 outstanding resident theatres and is supported by over 40 corporations and firms. Prior to Theatre Forward, Bruce was Managing Director of New York’s Signature Theatre Company for four seasons. He began his career in theatre in the Script Department of Manhattan Theatre Club. His corporate experience includes accounting, budgeting and administration in the publishing and banking industries, as well as a three-year stint with the United Nations World Food Programme in Rome, Italy. He holds an MFA from NYU’s Tisch School of the Arts and a BS in Business Administration from the University of Nebraska-Lincoln.

Theatre Forward is devoted to advancing the American theatre and its communities by providing funding and other resources to the country’s leading nonprofit theatres. Through its network of leading corporate, foundation and individual funders, as well as regional theatres, Theatre Forward aims to increase access and opportunity for all to experience theatre that builds community and sets the stage for individual achievement by advancing strong theatre and educating through theatre.

Theatre Forward is an association of institutional nonprofit theatres located in 19 cities across the country.