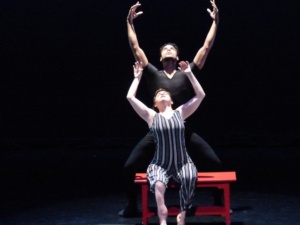 Victory Dance Project was founded in 2014 Amy Jordan, five years after a horrific bus accident almost took her life.  That day, she resolved that if she survived, she would do a “victory dance” to celebrate, and launched VDP Project with the mission to “Make the Impossible Possible with the Power of Movement.  She is an embodiment of that motto: At the Opening Night Celebration, Amy  returned to the stage for the first time since her accident, dancing in a new work choreographed by Christopher Jackson.  In appreciation, she  dedicated the performance to the incredible doctors at the NewYork-Presbyterian Hospital Burn Unit, who she credits with saving her life.

The night also featured performances by students  from the  Early Mosley’s Diversity of Dance company.

I was moved as I watched Amy Jordan take to the stage and do what she loves the most  and perform her Victory dance.

Suzanna BowlingJune 6, 2022
Read More
Scroll for more
Tap
The Book of Henry Will Tug On Your Heart Strings
Happy Father’s Day From T2C With Some Last Minute Idea’s For Dad