Voices Speak Out This Week at the Museum of Jewish Heritage 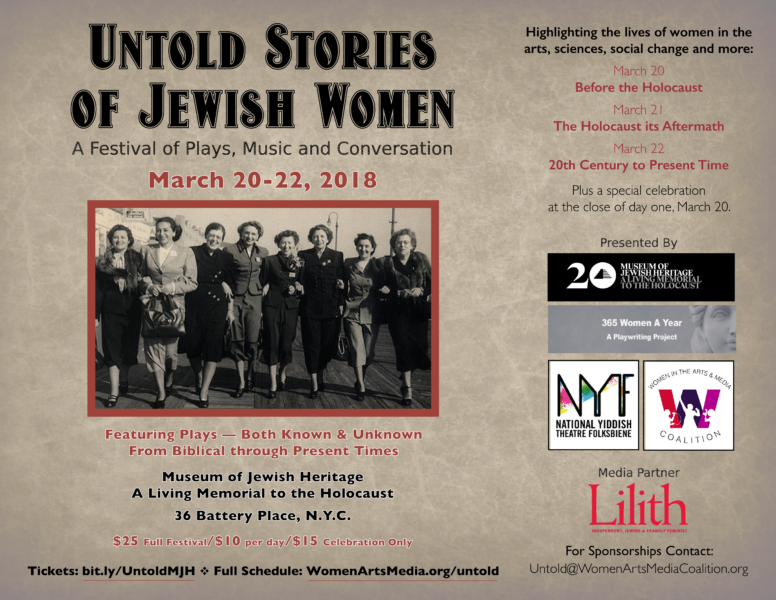 Voices Speak Out This Week at the Museum of Jewish Heritage

Untold Stories of Jewish Women is a three day theatrical festival, March 20-22 at the Museum of Jewish Heritage in NYC. From the biblical legends of Sarah and Esther, to the “Iron Lady” of Israeli politics, Golda Meir, to the comedy of Joan Rivers and Sarah Silverman, the festival will explore the archetype of women who have contributed so meaningfully to the zeitgeist yet their stories have been told from only a few perspectives, and some have not been told at all, until now.

There are pieces about scientists, revolutionaries, survivors, and artists of all kinds.  These stories, both familiar and not, reveal a compelling cultural history which must be seen.

DAY ONE – JEWISH WOMEN BEFORE THE HOLOCAUST: TUESDAY, MARCH 20

WITH: Tracy Stark on the piano, and Zoe Aqua on the violin

DAY TWO – JEWISH WOMEN IN THE HOLOCAUST AND ITS AFTERMATH: WEDNESDAY, MARCH 21

1:00pm – 2:30pm
Lilith Magazine Salon – Are we allowed to say that women’s experiences of the Holocaust are different?

3:00pm – 5:30pm
vessels by Kim Yaged
The Woman with the White Hair (Henrietta Szold) by Elsa Rael
Searching for a New Sunrise by Robin Rice (excerpt)
Fibers by Amy Oestricher (autobiographical, excerpt)
The Spoken and the Unspoken by Cynthia Cooper

Suzanna BowlingJanuary 31, 2023
Read More
Scroll for more
Tap
​Minimalist Parenting: 4 Tips to Improve your Family Dynamic
He Says: Amy and the Orphans A Salute to the Real Aunt Amy and to the Play’s Star, Jamie Brewer