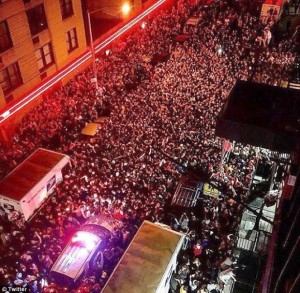 With just the rumor of a Kanye West concert thousands of desperate fans descended to Webster Hall, forcing officials to cancel the event and requiring dozens of police officers to disperse the crowd. The chaos started because wife Kim Kardashian snapchated a video of Kanye was asking for Mayor Bill de Blasio to shut down the block. More than 4,000 people swarmed the streets around Webster Hall, which holds a mer 1,500.

Shortly after 1 a.m. EDT, an hour before the show was supposed to start, West tweeted that the performance was “sold out. Chanting ‘Kanye’ and ‘Pablo’, fans climbed on top of cars and scaffolding, and hung out of windows to see the rapper who was set to perform his latest album, The Life of Pablo, outside. 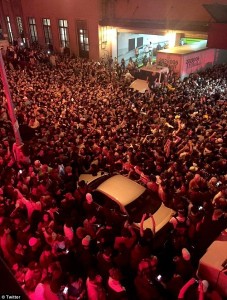 When Kanye did show up and his car was mobbed. West was scheduled to headline the Governor’s Ball, but organizers canceled all the performances due to the weather.