War Words…Shit Happens, And Then You Drive On 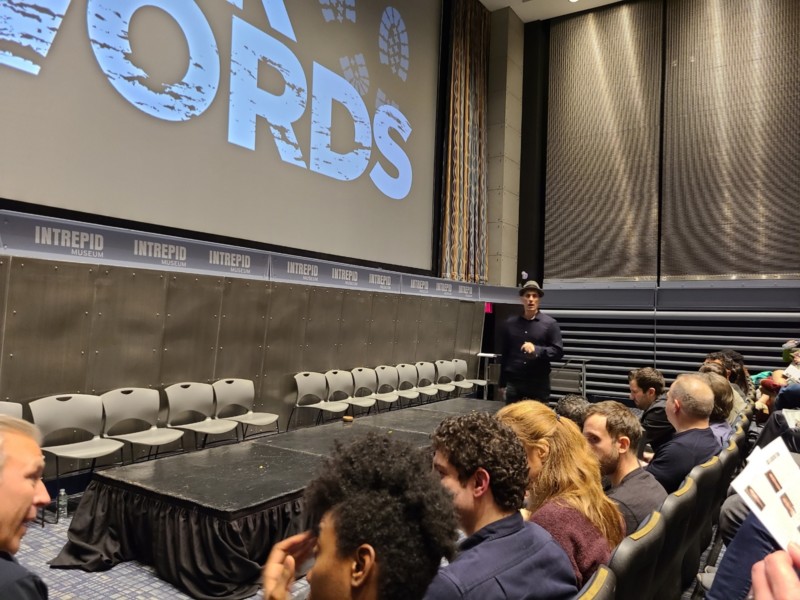 War Words…Shit Happens, And Then You Drive On

As the audience listens to Gimme Shelter by “The Rolling Stones” the actors involved in the stage reading rise as one and march up and around the platform. Each actor will read from that platform at several points in the evening.

Director Justin Reinsilber, was just made artistic director at NY Rep, which is the producing entity that put this performance on. He tried to make this seem edgy, but the staging seemed robotic. War Words which was performed for one night in New York City, will perform this Thursday in Los Angeles.

The show is written by award-winning playwright Michelle Kholos Brooks. Brooks won the Susan Glaspell Award as well as Festival Fringe Edinburgh for Hitler’s Tasters. Her play, War Words takes us through the lives of soldiers’ of from the different theaters of the military in both Iran and Afgahanstan.

Throughout the evening we are given many facts. Did you know that only 0.5% of the entire population in America serve in the military? That most soldier’s feel the call to serve, rather than being drafted. That IED’s kill more soldiers and property than anything else combined?

Brooks gives us a mixture of interpersonal knowledge as well as a history of the people standing before us. She also gives us a smattering of all four branches of our military. We hear from a Chaplin, an Afghan interpreter and a person in intelligence. It is creative and informative to hear the many sides that makeup what a war looks like and what war is. These soldiers do not complain, they are a band of brothers who look after one another, would die for one another. There is a respect and honor for one’s fellow soldier, which is a key to success in any war.  How do soldiers come to be soldiers?

In the beginning of this roughly 90 minute play, Brooks has many of the cast tell us how they joined the armed services. Some were tech geeks, some were slackers in school, others needed to find themselves but they all came to join something that was for the greater good.

9/11 had many in our country very upset, recruitment was at an all time high in the U.S., people wanted revenge on the terrorists who brought down the World Trade Centers and the Pentagon. Americans were fearful of weapons of mass destruction that Saddam Hussein possessed (which may or may not have been true).

Brooks educates us on terms like “green on blue”, how friendly soldiers in the Middle East are made to kill American soldiers or have their families face death. Little children are packed with bombs and made to détente them on American soldiers.

Brooks further explores the woman in the military and their challenges of not only being soldiers, but the human side that they face as well. Mothers, daughters, individuals of sexual predication and the differences between them and the men in the military.

The stories that they tell are as real and effective as the clap and boom that the actors perform every time a bomb goes off. The feeling is as real as the PTSD that many of soldiers face when they return home.

Further brought to light is the botched operations and miss diagnosis that many soldiers receive, the over medication, the under medication, many times leading to undue violence toward loved ones.  Whether a soldier has to take “The Long Walk”, decode messages, take out the enemy from the sky, stay up all night watching the enemy from a battle ship, the author has brought out the many variables about fighting a war.

At times the play get’s philosophical, at other times it is psychological, but for the most part it is both entertaining and enlightening. I am not sure, however that this play could be anything more than a stage reading. It could not be done as a traditional play. It would only work in the form in which it was done; in a row where actors sit and wait for their chance to get up and speak when it is their time.