Washer/Dryer is Like a Updated Barefoot in the Park

Washer/Dryer is Like a Updated Barefoot in the Park 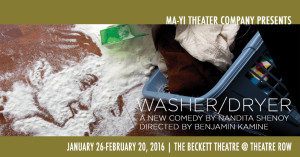 Nandita Shenoy’s Washer/Dryer is like a Barerefoot in the Park for today. The Ma-Yi’s production at the Beckett Theater on Theater Row company is charming, witty and a light piece of fluff that is welcome in this serious atmosphere. After just three months, three days ago Sonya (Ms. Shenoy), a off off Broadway Indian actress, whose yeast commercial has afforded her a an UES studio with a Washer and Dryer has married Michael (Johnny Wu), a Chinese American freelance writer. He has moved into her apartment but problems arise as the apartment is in a co-op building where the board is a nightmare run by a shrew named Wendee (Annie McNamaras). Her ownership will be terminated if someone else moves in, which causes problems. In the meantime Michael has just informed his possessive domineering mother Dr. Lee (Jade Wu), about the marriage. In response she descends upon the young couple to to express her disapproval. Michael stands up to her and orders her out. As Dr. Lee leaves Wendee descends as Sonya claims Michael is her gay best friend. Micahel saves the day by playing along, but when she leaves the couple fights and Michael storms out. Enter Sam (Jamyl Dobson), Sonya’s flamboyant very gay best friend. Thing spin out of control as Sam sashays in a sari before the final wash is through.

Benjamin Kamine’s keeps the action moving like a fast paced sitcom. Who steals the show here is Mr. Dobson, who has terrific grace and makes putting on a sari a things of comical beauty. He manages to make us laugh with the silliness of it all.

Is this great theatre, no but it was enjoyable.

Genevieve Rafter KeddySeptember 12, 2021
Read More
Scroll for more
Tap
Sparky! – Delightful Family Fare
My View: Rarely Does A Actor/Singer Affect Me Like This One Did