The cast of Desperate Measures just made the cutest video starring cast members Gary Marachek, Lauren Molina, Sarah Parnicky, Conor Ryan, Peter Saide and Nick Wyman. On Thursday August 16th at 10am the cast will be on the Today Show singing and dancing up a storm. This comes right on the heels as this tuneful show releases their cast album. With music by David Friedman and book and lyrics by Peter Kellogg, you are sure to be smiling and throughly entertained by this must have cast album. David Hancock Turner’s orchestrations include banjo and violin parts that give this score a country residence, that you will be humming the rest of the day. 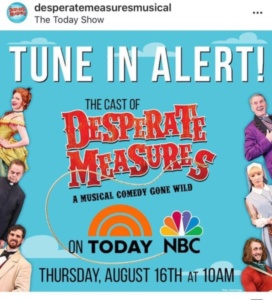 Conor Ryan brings a bashful, “ah shucks” to his numbers, along with heartbreaking vocals on “It’s Good To Be Alive.”Lauren Molina is a standout in “It’s Getting Hot In Here”, as well as her trio with Emma Degerstedt (the original Sister Mary Jo) and Peter Saide on “The Way That You Feel”. My favorite number is “Stop There” also sung by Mr. Saide. But it is  Nick Wyman’s songs “Some Day They Will Thank Me” and his duet with Sister Mary Jo “About Last Night ” that are comedy gems.

Tune in to The Today Show to hear more of this delightful show.