Okay. How about this? It’s December. Christmas is in the offing. A visit with your family is imminent and old grudges, which had been laying dormant all year long, suddenly reawaken. It’s not long after those first hugs and kisses that someone takes a potshot at someone else. We’ve all been there. It’s this sense of familial universality that makes James Goldman’s The Lion In Winter resonate. We all know what it’s like to face down our relatives, come wintertime.

Catskill’s Bridge Street Theatre is set to unveil a rousing production of the play, which opens November 10. 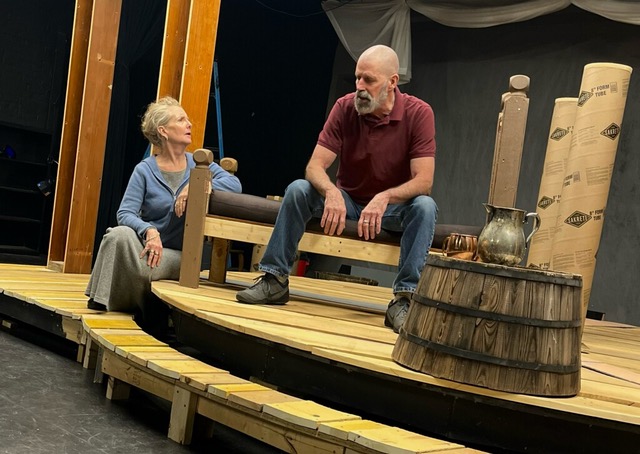 Leigh Strimbeck and Steve Patterson in rehearsal for The Lion in Winter. Photo by Michael Raver.

Made famous by the 1968 Anthony Harvey film starring Peter O’Toole and Katharine Hepburn, the plot centers on a Christmas court in 1183 Chinon. The Plantagenet family—King Henry II, his estranged wife, Eleanor of Aquitaine and their three power-hungry sons have gathered to ring in yuletide cheer. Well, sort of. Hurt feelings of old give way to political espionage. Eleanor has been imprisoned by her husband for ten years. Each son vies for their father’s crown. The King of France, visiting for the holiday, makes civic demands. His half-sister, a princess with whom Henry has been having an affair, stakes claims of her own.

It’s a combustible and often complex web of grudges and desires.

However, the Plantagenets, like the Wingfields, Tyrones, and the Youngers, experience the same kind of bond-breaking and betrayals as any contemporary family might. Medieval trappings aside, the desperate hunger for one another’s love is their greatest motivator.

When planning the season for Bridge Street, did you know you’d be playing this role? How did that decision get made?

Yep. One of the advantages of being an actor running a theater is I get to help make decisions regarding which plays we’re going to do—I also serve as the theatre’s literary manager, so I’m the one reading all the manuscript submissions that come in and trying to find interesting new works for us to produce. And, on occasion, decisions about certain scripts are made because there’s a role I’d really like a crack at. Henry was definitely one. We try to do at least one play with some name recognition each season. Familiarity with a title really helps put butts in seats. There’s definitely a lot of love out there for the film version of The Lion In Winter. I’m also cost-effective. When a role for which I’m appropriate turns up in our season plans, my salary, which would otherwise have gone to another actor, pretty much goes right back into the theatre’s bank account.

The Lion In Winter is a work of historical fiction. How impactful is the real Henry II’s life on your creative decisions as an actor?

I love doing lots of research for the roles I perform, particularly if they’re based on real people. I frequently unearth terrific little nuggets of information that help add color and nuance to my performance. But ultimately, the script itself is the bible. I feel like it’s my job as a performer to try to illuminate the playwright’s intentions as clearly and as faithfully as I’m able, and that’s what I attempt to do every time out. When what the author has written departs from the facts as we know them—Shakespeare’s history plays are full of distortions—it’s not our task to correct the historical record, but to figure out why they’ve done that and what the story is they’re trying to tell.

Who is your Henry II?

He’s like Lear with sons, a sort of non-downtrodden Willy Loman. An immensely powerful and successful man. A coach. A CEO, who’s on the cusp of seeing everything he’s built, both personally and professionally, beginning to break down. And, on a simpler level, the breakdown is beginning to be physical as well. He’s having to confront both his own mortality and whether or not he’s going to have a legacy. He’s built something HUGE in the course of his lifetime and is attempting to ensure that it’s going to last beyond his death. I think there’s a very real panic on his part when he sees that starting to fall apart. And, I can certainly relate, as an actor, to the fear behind the realization that the sands are running out. How much longer, physically and mentally, am I going to be able to do what I do onstage? Are there any roles I still desperately want to do that I’m not too laughably old to carry them off? Has the body of work I’ve done mattered to anyone but myself? Accomplishments onstage are so completely ephemeral. Will anything I’ve done be remembered by anyone once I’m gone? I think that, more than anything else, is what’s informing my Henry.

What has been the greatest challenge so far?

Being an actor of a certain age, my biggest issue now is simply Line Memorization. There are a lot of words in this script, and cramming them all into my increasingly feeble brain is…yup…a challenge.

What about the role excites you?

Henry is a titanic figure, definitely larger than life. I’m truly having to “size up” in order to step into his shoes. Goldman’s writing is so good; literate, witty, incisive, corrosive. And, the gamesmanship going on between All the characters! It’s just so much damn Fun battin’ the birdie around with this cast. And, even though the stakes are deadly serious, there’s a genuine sense of play throughout. Who’s gonna come out on top? How many moves do I have to think ahead in order to win? Where are the other characters’ vulnerable points and when’s gonna be the best time to stick the knife in and twist? What can I say or do that’s gonna sting the most? I think, for these characters, that’s even better than sex. And, getting to explore all this with the cast as we work on the play is probably the most exciting thing about getting to do this role.

Some plays exist in the shadow of film adaptations, like STREETCAR does with Elia Kazan’s film. How difficult is it to navigate the imprint of such a celebrated work when approaching it yourself?

I don’t think anybody’s ever gonna banish the image of Hepburn and O’Toole in these roles from folks’ minds. And sure, that’s a concern gnawing away at the back of my mind. But hey, I can only bring what I’m able to bring to the role as I see it. And, simply because I’m who I am, my Henry ain’t gonna be the same as O’Toole’s. Hopefully, what will happen for audiences seeing our production, is that it will give them a fresh perspective on characters they feel they already know well. That’s certainly the kind of surprise I love getting when I go see plays I’ve encountered before. “Whoa! I never thought of it THAT way before.”

Why do you think this play keeps getting produced?

It’s the writing. There isn’t a role in this piece that isn’t catnip for actors. Juicy, juicy parts. Goldman endows these characters with superhuman verbal sparring abilities which leave all us mere mortals, both onstage and in the audience, gasping in admiration. And that’s a delight! There’s an old Oscar Hammerstein lyric that goes “When the authors make me say words that make me wittier / I feel just as smart as they, and what’s more I’m prettier.” Long as there are big ol’ hams like me looking for virtuoso material in which to strut their stuff, I think this one’s gonna keep gettin’ pulled off the shelf and put back into service.

What do you want audiences to walk away with?

Sheer enjoyment. The pleasure of getting to hear this kind of brilliant dialogue handled by a cast capable of buffing it to a dazzling sheen, which I’m confident we’ve assembled. Not many plays take you on this kind of thrill ride. Comedic in tone, dramatic in performance, it’s a real roller-coaster. And, to get to see it up close and personal in our intimate little space should only enhance the exhilaration.

James Goldman’s The Lion in Winter roars at the Bridge Street Theatre Nov 10-20.