We Have Yet To Have Crossed That River

We Have Yet To Have Crossed That River

Allan Harris’s new concert musical Cross That River A Tale of the Black West, opened last night at 59E59 Street Theatre’s. There is a lot to like about this show, but there are also problems with this piece. Harris a talented  composer and actor, doesn’t know how to edit. For a thirty-five page script to play over two and half hours because songs like “I Must Believe” and “Mule Skinner” don’t know when to end. Both are really good songs, but go on for at least 8 to 12 minutes, so that the band can have a hoedown. 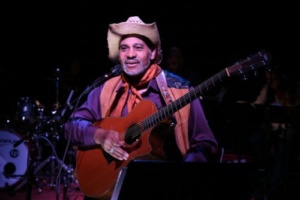 Another problem with the show is Act One feels like you are in church, where almost everything being said or sung is being preached. Act Two is like the show took a left turn at “It’s Not Easy To Be Invisible.” Suddenly the country blue grass feel is replaced with a series of 80’s pop ballads. Riding on the wave of the PC correct, liberal guilt trip, I started to wonder how many issues can you cram into one show? 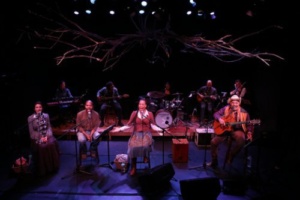 The cast of Cross That River Photo credit: Carol Rosegg

We follow Blue (Allan Harris) a cowboy remembering his past. As we meet his younger self (Jeffery Lewis), Blue is a slave who is privileged enough to work in the stables. He begins a love affair with Courtney (Maya Azucena), the bosses daughter. Afraid that he might be found out, Mama Lila (Carolyn Leonhart) suggests that Blue, cross that river towards freedom. When he does Blue becomes a cowboy, leading men on cattle drives from Texas to Kansas. His wife (Carolyn Leonhart) was a mail order bride, who after being abused hits her husband in the head and ends up working at Diamond Jims, which is how Blue meets her. In birth she and the child die sending Blue to join the Buffalo Soldier’s who are in hunt for some run away Comanches. When he finds the Comanches, painful memories resurface from his past and he relates to them. Setting them free, Blue watches as they cross the river. A women shows up from Blues past, healing the pain that was buried long ago. We then learn how the cattle drive only lasted for 20 years, but we worked together and created a nation the world and our children could be proud of. As Mr. Harris and Pat Harris (co-book writers) state; “I’ve learned that being an American is much more than suffering. We all went through as slaves, Native American’s and immigrants. We must always remember, we built this community together.” The show finishes with a song Mr. Harris wrote back in 2007 and had a moderate success on youtube. 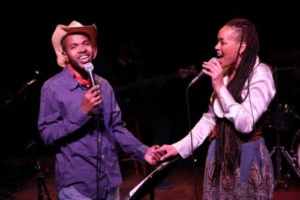 The musicians which include; Alan Grubner (violin), Miki Hayama (keyboards), the fabulous and stellar Shirazette Tinnin (drums and percussion), Seth Johnson (guitar) and Jay White (bass and vocal) are all first rate.

As for the singers, Carolyn Leonhart is the reason to see this show. She shines in every role and number she sings. This girl is a star and radiates in mega watts. Mr. Lewis has a pleasing voice, but sings a lot of the songs like he is on “American Idol.” Ms. Azucena, is out of her element and is strident on most of her solos. Of course Mr. Harris is in his element and is like an African American Burl Ives.

Its hard to comment on the direction, as this is literally done in a concert style.

I found the book by the Harris’s to be manipulative.  There are moments that the piece is touching and Cross That River is timely, but we miss so much of the time period. There is no mention of the Trail of Tears or the fact that this country or community was not built on cooperation but of taking and survival of the fittest. Just look at Utah and what is going on there. It has not changed.

Gobsmacked! – Family Friendly A Cappella Cheer
There Are a Limited Free Tickets to A Tribute To Barbara Cook