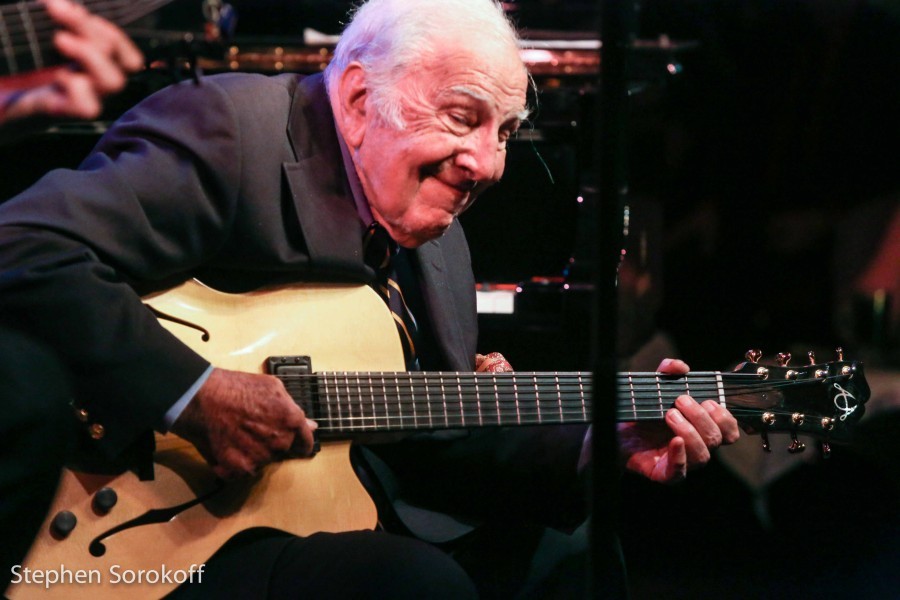 John Paul “Bucky” Pizzarelli was one of the greata American jazz guitarist. He was the father of jazz guitarist John Pizzarelli and double bassist Martin Pizzarelli. He worked for NBC as a staffman for Dick Cavett (1971) and ABC with Bobby Rosengarden in (1952). The list of musicians he collaborated with include Benny Goodman, Les Paul, Stéphane Grappelli, and Antônio Carlos Jobim. Pizzarelli cited as influences Django Reinhardt, Freddie Green, and George Van Eps.

Pizzarelli learned to play guitar and banjo at a young age. His uncles, Pete and Bobby Domenick, were professional musicians, and sometimes the extended family would gather at one of their homes with their guitars for jam sessions. Pizzarelli cites as an inspiration Joe Mooney, a blind accordion player who led a quartet that included Pizzarelli’s uncle, Bobby Domenick.During high school, Pizzarelli was guitarist for a small band that performed classical music.

Pizzarelli began his professional career at 17 when he joined the Vaughn Monroe dance band in 1944.

In 1952 Pizzarelli became a staff musician for NBC, playing with Skitch Henderson. In 1964, he became a member of The Tonight Show Band on The Tonight Show Starring Johnny Carson. During his time spent performing for the Tonight Show, he accompanied guest bands and musicians playing through a variety of musical genres, including playing with Tiny Tim (after tuning the performer’s ukulele) on the day that Tiny Tim married Miss Vicki on Carson’s show.

From 1956–1957, Pizzarelli used the stage name “Johnny Buck” and performed with The Three Suns pop music trio. He toured several times with Benny Goodman until Goodman’s death in 1986. During the following year, he and guitarist George Barnesformed a duo and recorded two albums, including a live performance in August, 1971, at The Town Hall in New York City. Beginning in the 1970s, he began recording as a leader, issuing many tributes to musicians of the 1930s. He performed with Benny Goodman at the White House in Washington, D.C., and he performed for presidents Ronald Reagan, Bill Clinton, and First Lady Pat Nixon.

“Jersey Jazz Guitars” was the name of a 1985 concert held at the Rutgers University Nicholas Music Center in New Brunswick, New Jersey. The ticket featured Pizzarelli, Les Paul, Tal Farlow, and Pizzarelli’s son, John. The concert was aired on New Jersey’s public radio station as part of their three-part New Jersey Summerfare Series. Pizzarelli and Les Paul had performed together before, as they were neighbors and friends. The show aired for one hour in August 1985, with son John adding his vocals on two selections.

He continued to play into his 90s making several appearances even after a stroke in 2016. He died on April 1, 2020. He has been battling several serious health problem in recent years. His cause of death was not immediately announced.

He is mourned by his son John is a well-known jazz guitarist and vocalist. His son Martin is a professional bassist who has recorded with his father and brother. His daughter Mary is a classical guitarist who appeared on her father’s third album as leader, Green Guitar Blues, as well on as other recordings. Pizzarelli also appeared on three albums of his daughter-in-law (John’s wife), Jessica Molaskey.

Suzanna BowlingJanuary 16, 2022
Read More
Scroll for more
Tap
Meet The Former and Present Residents of Manhattan Plaza: KT Sullivan
What To Watch April 3rd To Take Away The Blues