We The People The Anti-Trump Musical – Democracy Sings

We The People The Anti-Trump Musical – Democracy Sings 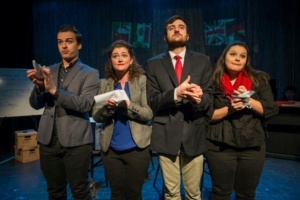 Flying Elephant Productions is a new company whose premiere production is pointedly political. Following the turbulent 2016 United States Presidential Election, We The People The Anti-Trump Musical is passionate, persuasive and at times, a poignant piece of work. Book writer Sean Chandler and music and lyric composer Leo Schwartz utilized their crafty microscopes, dissecting the dissension of the last election cycle. After all, electing the next head of the government and commander-in-chief is a fundamental American right and privilege. Whether you were “With Her” or wanted to “Make America Great Again” We The People offers a little something for everyone.

Director Derek Van Barham, kept the pace lively and the cues loose. The cast of six actors, Dwayne Everett, Bradley Halverson, Timothy Swaim, Elizabeth Rentfro, Carmen Fisher Risi and Alyssa Soto, sang at a fever’s pitch. With an original song list including “Not My President”, “When He Tweets”, and “Where’d the Party Go”, you’ll find your heart breaking by missed potential while simultaneously snickering at the requisite tiny hands and sexist pig jabs that are now the daily fodder to a slew of late night comedians. Lyrics of note included “This man stands for everything I don’t believe in”.  “Should I have been with her?” bemoaned a former Trump supporter whose son is now losing his insurance coverage due to cuts by the GOP’s regime, due to his slew of preexisting medical conditions. The pointed “How did we score this win, but the Party loses?” could just as easily be sung by real world counterparts, Paul Ryan and Mitch McConnell. The song”538″ clearly a jab at the Electoral College, who once again ignored the popular vote by the citizens of this country. 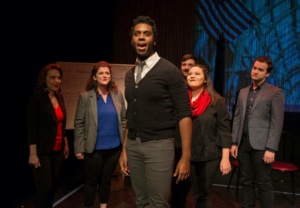 With the title The Anti-Trump Musical I was expecting the usual Saturday Night Live type antics. While elements of that were clearly displayed, Schwartz’s score scratched significantly deeper than the surface. Also of note, G. Max Maxin IV’s better than they needed to be projection design’s and Theron Wineinger’s mobile set pieces. 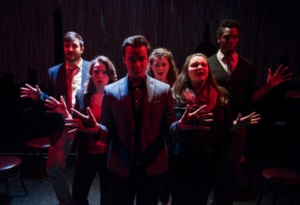 Ending hopeful, “Immigrants are as American as America gets”  was a line from the rallying cry “We The People MUST bring change.” We are not an easily defeated country and we do not suffer fools gladly. The idea of this project may have started as parody, but by the show’s conclusion, the audience felt inspired and motivated, far beyond just pink pussycat hats and peaceful community demonstrations. According to the actual Preamble of the United States Constitution “We the People…in Order to form a more perfect union, establish Justice, insure domestic Tranquility… promote the general welfare and secure the Blessings of Liberty to ourselves.” While it is questionable the members of the current administration has even read The Constitution, the creators of this unique theatrical experience certainly have, and we are all the better for it. The run may be limited, but the rallying cry and message behind carry on far after the curtain closes.

We The People The Anti-Trump Musical is now playing through February 10, 2018 at Stage 773

RossOctober 21, 2021
Read More
Scroll for more
Tap
Color Blind Casting Will Never Work Until All Colors Including White Aren’t Seen
He Says: The Outsider: Who Will You Vote For? The Smartest or the Most Charming?