Weiner and 15-Year-Old Girl is the Downfall of Hillary 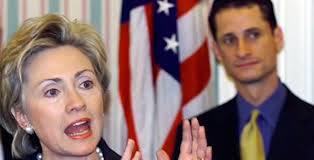 Weiner and 15-Year-Old Girl is the Downfall of Hillary

The FBI has reopened their investigation into Hillary Clinton’s secret server. Long time companion and top aide Huma Abedin ex- husband Anthony Weiner’s laptop is the reason why. Weiner’s electronic devices were seized by the FBI during the probe into his sexting of a 15-year-old girl. The emails, prompted FBI Director James Comey to reexamine the case.

The FBI launched has sent shockwaves through both presidential campaigns.

The news broke, as Ms. Clinton was on flying on a plane with no WiFi coverage and was told of the bombshell when she landed in Cedar Rapids, Iowa just after 1pm, local time.

The emails contain a stunning link between Clinton, Abedin and Weiner.

Ms. Clinton, the former secretary of state and the Democratic nominee for the White House, leads Republican presidential nominee Trump, by only four points. For a candidate that has claimed innocents, has been undone by her outright lies to the American people. First her campaign chairman John Podesta emails were published by WikiLeaks and laid out just how corrupt this issue really is.

FBI Director Comey claimed no reasonable prosecutor would move forward with a case like this and added that it was not even a close call. Now he is being asked to provide the American public more information than is contained in the letter he sent to eight Republican committee chairmen.

‘In the months since, Donald Trump and his Republican allies have been baselessly second-guessing the FBI and, in both public and private, browbeating the career officials there to revisit their conclusion in a desperate attempt to harm Hillary Clinton’s presidential campaign. Comey has now said that after learning about the emails he advised the bureau to take ‘appropriate investigative steps’ to review them.