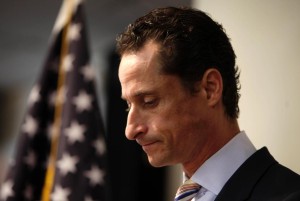 “I guess the punchline about me is true.”

The new documentary Weiner, discloses very little new information about former Congressman and sex pervert Anthony Weiner and his wife Huma Abedin, sidekick and longtime aide of Hillary Clinton. Premiering at Sundance today, you are going to saturated with the disgraced New York City politician and his wife. Filmmakers Elyse Steinberg and Josh Kriegman were allowed access due to Kriegman’s job as chief of staff for Weiner, before becoming a filmmaker. Not a bad way to get the dirt. 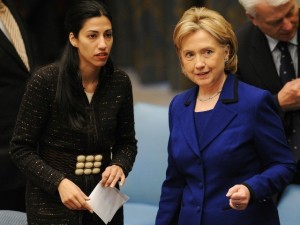 This will hardly affect Hillary Clinton in terms of tidbits of fodder, even though Abedin is a close member of Ms. Clinton’s entourage and has been for years. New Yorkers will find Bill Clinton, officiating Weiner and Abedin’s wedding and swearing in of Bill de Blasio as mayor instead of Weiner interesting.

What this film shows is the tension that surrounds Weiner and his wife. When caught realizing his online sexting antics are coming to a head, Weiner states the word “F*&^.” Weiner’s wife and counsel is clearly pissed off.

According to the filmmakers “Weiner deftly teeters the line between political farce and personal tragedy, exposing the ex-congressman’s hubris while highlighting the sheer ugliness of the media’s takedown of his family. With the city of New York as a loud and bustling backdrop, this documentary charges through an increasingly baffling political campaign with unflinching clarity, humor, and pathos.”

So we learn there are more women…no big surprise. In all honesty, I do not understand the big deal about this film. It is well done, but Anthony Weiner is like the viagra of publicity for a disgraced man. Does nothing keep this man down and keep him there? I look forward to the day he fades into oblivion.

Weiner is set for five more screenings and Sundance. The movie has a theatrical release on May 20 and then airs on Showtime shortly before the Nov. 4 election.