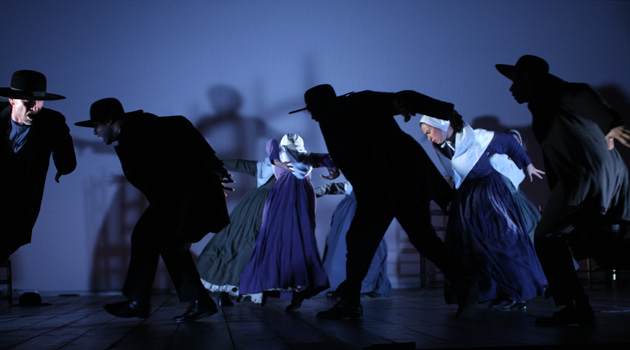 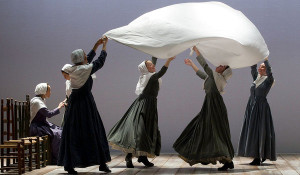 “Brethren and sisters may not pass each other on the stairs.”

Martha Clarke and Alfred Uhry’s dance theatre piece  Angel Reapers at the Signature Theatre is like being placed into a church service that the devil has possessed. Based on the services of the Shakers, the actors burst into fits of giggles, rambunctious dancing, speaking in tongues, joyous singing, fits of shaking and over all thankfulness. At first there is much to applaud in this well conceived piece. Then the piece lapses into sexual desire and it is shown in the church setting. Celibacy is the law but here men crave other men’s touches as is shown by the sensual balletic duet by Brother Jabez (Matty Oaks) and David Darrow (Andrew Robinson, the most handsome of the group). Both orphaned and raised by this group the rebel Brother Valentine (Rico Lebron), seduces Sister Mary Chase (Ingrid Kapteyn). It is clear these two have feelings for each other from the beginning. Finally they make love on stage complete with his pulling her dress off so she is naked from the waist up. They are pulled away but they leave until Mary comes back pregnant and the group disowns them. We see Darrow again with his wife (Gabrielle Malone) and it looks like rape but it is more of a husband wanting his wife. Sister Susannah Farrington (Lindsey Dietz-Marchant) is the abused wife who in finding God in the broom closet leaves her husband. Lindsey Dietz-Marchant gives this role a soul that transcends this piece. This rapturous faith is a torment of souls lead by Mother Ann Lee (Sally Murphy) and her real life brother William (Nicholas Bruder) who you feel at one time were incestious relations.

What is wonderful about this piece is the rhythmic stamping feet on bare floorboards. Ms. Clarke’s choreography is inventive, interesting and simple, but never reaches a climax.

This piece was actually seen at the Joyce Theatre in 2011. The Shakers were at their height in the 18th century and due to their celibacy practices are now nearly extinct. Their first important leader was Ann Lee.

The traditional Shaker songs, sung a cappella. Musical director  Arthur Solari has allowed the beauty of these songs to soar with the help of Brother Moses (Yon Tande), Sister Agnus Renard (Sophie Bortolugussi).

The dancers are uniformly wonderful and the direction by Ms. Clarke well done.

For me separation between church and theatre is blurring this year and watching sex in what is suppose to be a service is a turn off.

Suzanna BowlingOctober 29, 2022
Read More
Scroll for more
Tap
My View: “It’s Too Damn Loud.”
Theatre For A New Audience’s Pericles is Beautiful To Look At