We’re Only Alive for a Short Amount of Time 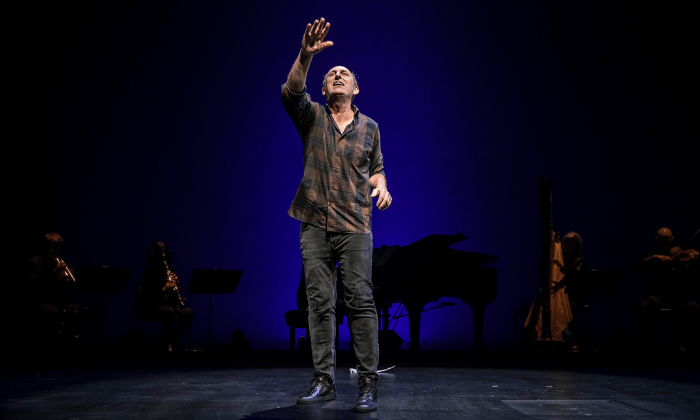 We’re Only Alive for a Short Amount of Time

Somehow I missed seeing David Cale’s work, so I was new to this man who performs his autobiographical, one-man show with music We’re Only Alive for a Short Amount of Time at The Public Theatre.

The play needs a singer and an actor who can draw us in. Mr. Cale does neither for me. His singing is like a sheep without depth. When he stated he was in Three Penny Opera on Broadway, I was definitely shocked. Another distraction is his arm movements, which just seem disjointed and awkward. When singing his fingers tense, as if they are straining for a note.

Maybe I am spoiled by seeing and knowing James Lecesne, who does this type of theatre with multi-layering making each character seem to pop off the stage into your subconscious.

The score co-written by Cale and Matthew Dean Marsh and the six-piece band are interesting and deserve a recording done possibly by Jake Gyllenhaal, who would have been outstanding in this piece.

The show chronicles Cale’s childhood in a small town called Luton in industrial England. Luton is famous for hatmaking and according to Cale whose real name is Egleton Luton is “the ugliest city in England.”

Cale’s childhood was a nightmare. His dad Ron was an alcoholic and abusive. His mother, Barbara was stuck in a marriage and job she hated. They fought incessantly. David escaped by creating a bird and animal hospital, which became his refuge. His younger brother Simon, was over weight and needed him to became his protector, which he did.

From a young age even though his father warned him against the gay boy next door, Cale was disrobing and flaunting his body. He also was into musical theatre and Liza Minnelli. When Cabaret opens he needs his mother to take him and lie about his age. She does and the two bond over lemon meringue pie. It turns out Barbara was creative in so many ways and has been cut off from expressing it. She tells her son “One day, you’re going to realize the potential in me that never saw the light of day.”

Though his grandfather is wealthy and owns the hat factory, he has hated Barbara and has been one of the people who stopped her from creating. He has gotten his fortune through the Kray brothers, who were well known English criminals, involved in murder, armed robbery, arson, protection rackets and assaults.

The show is told in narrations by Cale, his father, his mother and his brother. Who we don’t hear from is the grandfather. There are also some other curious incidents. In a trial David is asked if his mother or father was abusive. To the mother, he says yes and states he was afraid of her. To the father, he states no, yet it is stated during the show that the father was abusive and David seemed to have had a good rapport with his mother, at least at this point.

Also he ends up taking his father to a Liza Minnelli concert, where his father is a mess. I understand forgiveness, but seriously? Why would you do this? It seems like the father was a repressed homosexual and maybe Cale wanted to bond, but after what he did why would you want to? This seriously boggled my mind.

Robert Falls, the artistic director of Chicago’s Goodman Theatre, where the show had its premiere, directs simply and it works.

Set designer, Kevin Depinet is also a minimalist, but with birdcages, feathers and planes he makes a statement that is wonderfully moving.

As demons are exorcized and Cale is set free, he proves our past does not have to bind us. Cale has gone through a lot and this work is brave, but sometimes we need to let others perform it to make the most out of the material.

We’re Only Alive for a Short Amount of Time: The Public Theater, 425 Lafayette St. until July 14th.