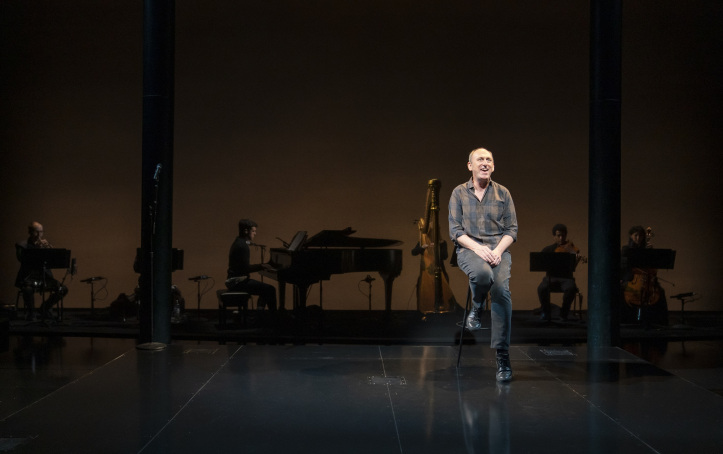 One wants to soar alongside those musically envisioned Canadian Geese, flying so high above the stage of the Public Theater’s We’re Only Alive for A Short Amount of Time, as told by the gifted writer and performer, David Cale (Public’s The Total Bent). David, the central character of this solo show, with simple kind gentleness, lulls us with his sweeping and engaging spoken poetry, telling a tale that is obviously his own from the get go. He flaps, prances, and pulls us in with ease and an unsteady voice, backed by the underscoring of live music courtesy of the fine musical creations by Cale and Matthew Dean Marsh (LCE’s Romeo & Juliet), into a sense of sweet nostalgia. The music, with lyrics by Cale and a team of solid musicians: John Blevins (Trumpet) Josh Henderson (Viola) Tyler Hsieh (Clarinet) Tomina Parvanova (Harp) Jessica Wang (Cello) is tender and it trembles with an anxious edge that peaks our interest. As directed by Robert Falls (Public’s Blue Surge), We’re Only Alive… paints a picture of simple familial life, at first, through the innocent eyes of a little gay boy Lolita from Luton; a “feral child” desperate to save and care for the injured birds and animals that stubble in his path, including his own family members. He takes them in, bandages them, and tries with a big open heart to save them all, with gentleness and love at his self-titled bird and animal hospital shed. It’s clear there is a sharp edge to this story lurking just out of sight; a familial tragedy vibrating under the nervousness of a young boy’s twisting hands and averted eyes. It’s also clear that it is going to sneak up on us, that is if we aren’t paying attention to the subtle subtext and the casual asides, and slap the nostalgia out from under our gaze. But the tension that lives on in the child is that same one that flies above with the model planes and is etched in the portrayals of all involved.

On a dynamically theatrical stage, designed with an attention to the symbolic by scenic designer Kevin Depinet (Paramount Theatre’s Les Miserables), with simple costuming by Paul Marlow (Abingdon’s The Mother of Invention), dramatic and warm lighting by Jennifer Tipton (STC’s An Oresteria), and a solid sound design by Mikhail Fiksel (PH’s The Flat Earth), the piece fluctuates forward, entering and exiting Cale’s body like a ghostly possession.  He easily inhabits all of the central characters in this tragedy in a way that resonates with a heartbreaking authenticity, never becoming too much, but sometimes flying a bit too far from the young man at the core of the piece.The musical score elevates moments into something akin to a soundtrack, feeling like he has stationed himself inside a movie, meta-filming himself telling a tale about a boy who suffered a great shocking loss, but who also loved Liza Minelli in “Cabaret” and most importantly, birds. It’s about how a family can look back at a slice of disturbing violence, and survive, maybe even heal themselves of that sorrow and loss over time and with purpose. The songs elaborate a young boy’s desire and yearning for beauty and love alongside the loss and tremendous need for something else. “Will I ever kiss a man again?“, and although we know the answer, we also feel the tremor of pain and desperation of a child growing up against all the odds stacked up against him.It’s interesting to ponder what this ‘play with songs’ would be like told by a stronger singer and actor. The music and songs might come more alive, finding an exciting vibrato in a powerful vocal performance, but the essence will always have weight and strength regardless. Cale find’s his voice, shaky but true, innocent and engaging, to tell his personal tale of survival through anger, betrayal, and tragedy. His unique take and shaky soul draws us close, and we join him as he sings his heart out and takes flight with his beloved rescued birds.