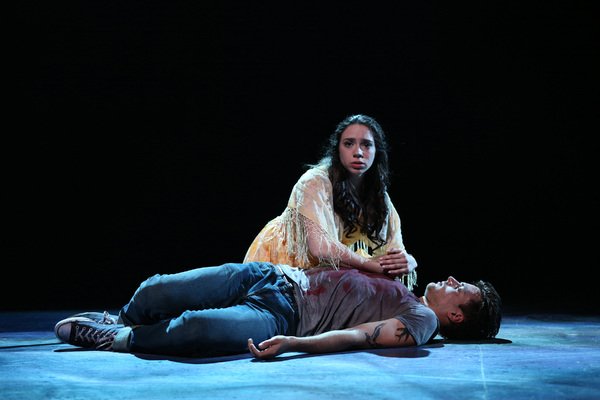 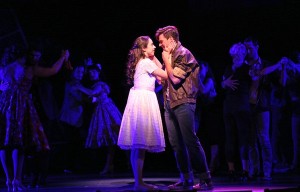 There really is something to be said for the classics done extraordinarily well. Shakespeare’s Romeo and Juliet reinterpreted with a Latin beat, set in the Upper West Side of 1950’s Manhattan, is currently electrifying audiences in the West Chicago suburbs with brilliant results. If you can, do take the opportunity to venture down to the Paramount Theatre in Aurora, Illinois to witness this gritty, and at times graphic interpretation, first hand. Pulling no punches in the numerous fight scenes that punctuate this tale of star crossed lovers caught as collateral damage in a gang turf war. Yes,  I am talking about the perennially delightful West Side Story, here peppered with a layer of realism rarely seen. Director Jim Corti and choreographer William Carlos Angulo reinterpret this classic with edgy, modern day, vivid realism. Each maneuvered punch lands a black eye or a bloody nose.  There is no sugar coating the gang warfare violence in this rendition, which adds a sense of urgency and resolve to their rumbles. Teaming over 30 talented triple threats; dancers/singers/actors, with one of the most spectacular scores known to stage (music by Leonard Bernstein and lyrics by Stephen Sondheim) this version of West Side Story astonished. Their collective hard work shines up through the rafters. 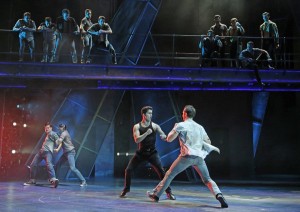 The classic story combined the growing turf war between rival gangs, The Jets and Sharks, set against the impossible love story of good girl immigrant Maria, a luminous Zoe Nadal, and city boy Tony, the dashing, Will Skrip. Proving that the heart wants what the heart wants, the defiant, budding young lovers, defy convention and their families, including Maria’s Shark gang leader brother, Bernardo (Alexander Aguilar) as well as cultural loyalties in an attempt to be together.  Skrip’s powerful renditions of  “Something’s Coming” and “Maria” as well as Nadal’s gorgeous soprano wrapped around the flirty “I Feel Pretty” are worth the price of admission alone.  Choreographer William Carlos Angulo has reworked the original ballet influenced choreography of Jerome Robbins, with more dynamic & aggressive movements, reflective of the impending dangers found within hormone-raging, teen-gang members. Artfully executed, of course, with Violence Design by R&D Choreography, Victor Bayona and Richard Gilbert. Even though this is a musical designed to entertain, the creative team made the conscious decision to blend the harsh realities of gang warfare, broadcast nightly on the Chicago news, within the production.  This West Side Story hopes to provoke and educate far beyond its well known score. 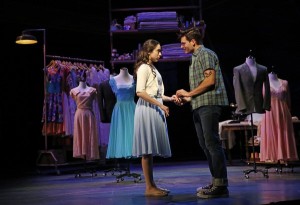 With crisp musical direction by Tom Vendafreddo, and a full  orchestra of talented musicians, this sumptuous soundtrack is nothing short of magic. The lush swell of melody supporting the lyrics of both “Tonight” and “Somewhere” was simply outstanding.  While we are talking about outstanding, the scene-stealing Anita (Mary Antonini) was a fiery, explosive combination of both brass and sass. Her remarkably strong vocals on “America” were well matched by her powerful dancing abilities.  The wild fury in which she whips her purple skirt while simultaneously & furiously enacting her dance steps, an act one highlight.  “I think I’ll go back to San Juan.” “I know what boat you can get on.” “Everyone there will give big cheers.” “Everyone there will have moved here!” Cheeky, mischievous, and sensual, Antonini’s Anita soars. 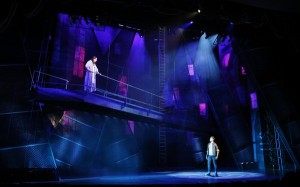 Restored,  the controversial and defiant number “Gee, Officer Krupke” which celebrated in song, pulling one over on an overbearing and racist beat-cop, Officer Krupke, played by Joe Foust. Once again, borrowing a page from real world headlines, making no illusions or excuses for the institutionalized racism which permeated this police force member. With rollicking lyrics like “Dear kindly Sergeant Krupke, You gotta understand, It’s just our bringin’ up- That gets us out of hand.  Our mothers all are junkies,  Our fathers all are drunks. Golly Moses, natcherly we’re punks!” It is understandable why this number was cut from the Oscar winning film from a bygone era.  Here it is back, with comical, vehement & sexually charged, tongue-in-cheek maneuvering. 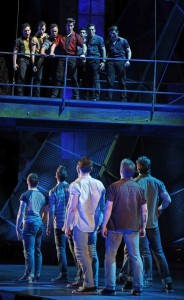 The multi-racial cast brings a higher level of credibility and diversity to the material as well.  The book by Arthur Laurents is respected with a varied cast, including Latino looking Sharks and Caucasian Jets mired in a turf war. The opening production number alone showcased over 14 different dancing lads. Costume coordinator, Theresa Ham, really had her hands full,  differentiating  between the rival, mostly denim-clad, gang members. Even the high school dance scene had over 20 performers simultaneously on stage, no two in the same cut of costume or color.  The remarkable scenic design of Kevin Depinet  noteworthy in impressive scale and scope. From sliding, chain-link fence screens, the intricately detailed interior of Doc’s (Tom McElroy) drug store, to the iconic balcony scene between Maria, on her multiple story, fully functioning fire escape, while Tony stands below, on the main stage street, the sets here were visually imposing.

Firing on all levels, Paramount Theatre’s tenacious and bold production of West Side Story  is something everyone should behold (if you can still get a ticket). Passionate dancing, outstanding vocals, a flurry of dynamite costumes, and dozens of happy hoofers,  Corti’s ultra realistic urban jungle rendition of West Side Story was a gamble which delivered, big time.

West Side Story at the Paramount Theatre plays through April 24, 2016