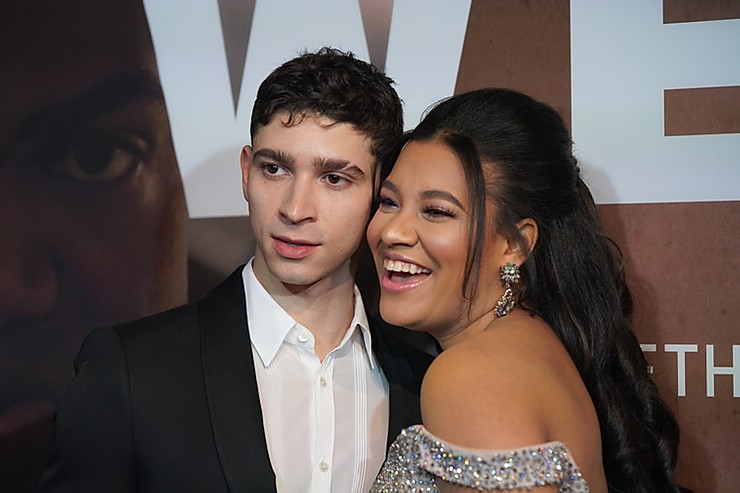 The much-anticipated Broadway revival of West Side Story opened this past Thursday evening with much fanfare and the usual batch of celebrities walking the Red Carpet prior to the curtain rising. Stars such as Alex Baldwin and Vanessa Hudgens came out to welcome this production to Broadway. I was unable to make it to the pre-show Red Carpet due to a previous commitment. Had I been able to make it I would have included some photos of the protestors outside the theatre. Click here to view pre-show Red Carpet photos. There were also protestors carrying signs and chanting, demanding the removal of one of the lead actors in this productions, Amar Ramasar, for his involvement in a scandal that occurred a few years back at The New York City Ballet. All one need do is Google “Amar Ramasar” for many sides to this issue. He was terminated by The New York City Ballet, then they were forced to reinstate him by a mediator. This entire scandal has delayed my personal coverage of this opening night. I felt trapped in a quandary; publicize a production involving a person involved in a sexual harassment / photo sharing scandal versus providing proper and timely coverage for ALL the other actors and creatives involved in this production.

The issues of due process are much larger than the matter of this protest. While it must be clearly understood that there is no room for sexual harassment in our society nor in our workplaces, I must ask, are we living in an age where simply being accused equals being guilty? Scott Rudin, who has stood firmly behind Ramasar. In a 60 Minutes special which aired last week, Rudin called Ramasar’s decision to share the photos “really stupid” but defended his role in the production: “Am I supposed to replace him in the show? I’m not gonna do that.”. “really stupid” ??? Ya Think?

I have decided that I my coverage will focus on the remaining 50 plus actors, 33 that made their Broadway debuts with this show. I don’t normally have the room nor the time to feature photos of all actors and understudies in a production. Especially with a cast this large. In this case, I feel it is not only proper, but required due to the circumstances. I am choosing to highlight the entire cast, not just the one that may have made “really stupid” decisions. They also worked hard and fought for their place in the spotlight.

While my editor may be unhappy with my delayed coverage, I felt I needed to cover this opening properly and needed the time to consider how that coverage should look. I hope that I have presented both sides to this ugly scandal in a fair and just manner. Many news outlets have covered this story. There are more than enough articles online and in various other media outlets to allow the public to make their own decisions about whether to support the hiring of this actor with their wallets and at the box office. To the 30 or more actors that made their Broadway debuts as well as all the other members of this production I salute your talent, dedication and years of hard work that has brought you to this place in life. Welcome to Broadway and best wishes for long and successful careers.