West Side Story: The Decimation Of The Broadway Revival 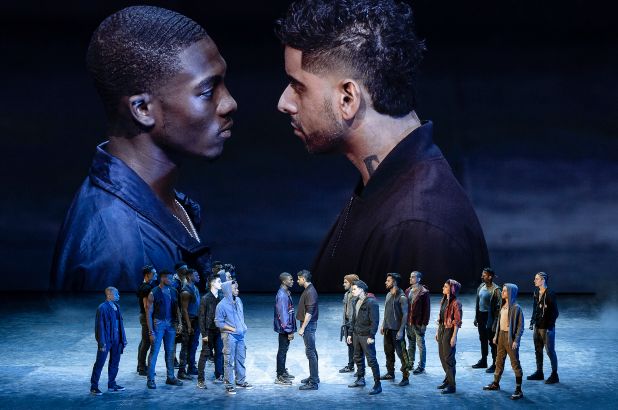 West Side Story: The Decimation Of The Broadway Revival

Before I saw the newest revival of West Side Story on Broadway, I had heard the rumors of how they had deconstructed the show, but nothing could have prepared me for what was on that stage. Massive screens loom like monsters, that have invaded the back of the Broadway Theatre from top to bottom, thanks to video designer Luke Halls. The actors are like ants, that seem squashed by the stark video, that at times is blurry for effect. You aren’t really given a choice of where to look as, it is in your face. Director Ivo van Hove (The Crucible), has dated the time from the 50’s to now, but hasn’t managed to change the dialogue so “Daddy O” and other slang of the time, just seems out of place. For that matter everything in this production seems ill conceived.

I thrilled for the athletic ballet, that spoke of the emotions of the gang members. Director/choreographer Jerome Robbins, has been replace by “choreographer” Anne Teresa de Keersmaeker. Her movement is disjointed, not always on the beat and in a word ugly! Only the men get fleeting moments of dance. The women just look like they are doing spastic kung fu. I wanted to openly cry for this vulgar attempt.

As the opening music reverberates, we get hideous images of the gang members. We are suppose to be able to see a clear distinction between the Sharks and the Jets, but they all look the same, hard, brutal and serial killers waiting to be unleashed. When they finally do “dance” they run in bizarre circles. Ms. de Keersmaeker, seems to be a fan of this, as she uses it several places. Riff, the leader of the Jets ( Dharon E. Jones) and Bernardo, the leader of the Sharks (Amar Ramasar), for all their brutality don’t seem that different.

When we meet Tony (Isaac Powell) at the gangs neutral spot Doc’s, it seems as if we lapsed back into the 50’s. Doc (Daniel Oreskes) would be the only fleshed out character in this piece. Most of the scenes at Doc’s you have to watch on the screen, as they are for the most part, behind the store. Isn’t the reason you go to see theatre, is to see the action live? Not in Ivo van Hove’s world. Powell’s Tony, is full of longing, but because things have been rearranged, he seems more stalker like. When he meets Maria (Shereen Pimentel), it seems like they have known each other for a nano second. The time lapse in the original show made their meeting seem otherworldly, but here it seems rushed and odd. Powell and Pimentel stand out, as everyone else just seems vocally and emotionally mediocre. Both have lovely voices.

As Bernardo’s girl Anita, Yesenia Ayala misses the fiery ump of her predecessors. “America” and “A Boy Like That” are no longer the moments you wait for, because she lacks that spark and furry, combined with raw want.

Now for the costumes by An D’Huys. They look like they were bought on sale at H&M. Maria’s white party dress is plain and unflattering. The clothes for “Dance at the Gym”, tacky. For that matter this whole show lacks in the technical department. The music sounds flat due to the sound design by Tom Gibbons. The set relies on gimmicks, such as rain, blood splattering and florescent lights, which makes everyone look bad. These are both done by Van Hove’s partner Jan Versweyveld. Only the music by Leonard Bernstein, with lyrics by Stephen Sondheim and music supervision and direction by Alexander Gemignani sound good when they are left to the simplicity of the original orchestrations.

This show tries to blame the “white people” for what is wrong. Lt. Schrank (Thomas Jay Ryan) and Officer Krupke (Danny Wolohan) are made to look like villains, but after seeing the larger than life photo’s of these gang members, one wonders who the villains are? Officer Krupke seems like an ode to #BlackLivesMatter, only it does it a major disservice.

The most disturbing manipulations of this show happen twice. First when they are singing “America” and they show the wall in Mexico. In case the director does not know, Mexican’s and Puerto Ricans do not take kindly to being blended into the same nationalities.

Secondly during “Somewhere” the male gang members, hold hands and kiss. Obviously Van Hove has not read the accounts of what happens to gay gang members. This very iconic American musical has been crucified. Even the balcony scene has been reduced to running around in circles in the street.

Even the playbill shows the problems with the show, if one realizes this was what the production team thought was the best picture they had to represent the inner workings. If this is the state of the American musical theatre, we are in terrible trouble.

Suzanna BowlingDecember 1, 2022
Read More
Scroll for more
Tap
He Says: The Power of Love Projected Large in Broadway’s Newest West Side Story
I Am Still Perplexing After The Perplexed