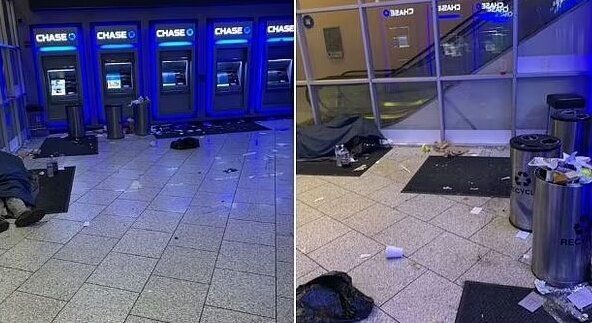 Mayor Adams closed up NYC’s Randall’s Island tent complex which was originally for immigrants, but why didn’t he use this for the homeless? It cost the city around $650,000, despite a report from the city’s Independent Budget Office that estimated the cost of building and operating the tent city at $16 million. It could have stopped the homeless crises where the homeless are now camping out and sleep in bank ATM’s. Chase has already shut down their vestibules by 6pm, as have City National Bank and Citizens have started closing around 10- 11pm, now Bank of America, Citibank, Santander, TD and Wells Fargo are about to follow suit.

Photos show the homeless sheltering from the cold as banks struggle to battle crime and vagrancy.

It doesn’t matter where in the city as the problem is everywhere. Not only are they sleeping in the area’s but they are using drugs, leaving trash as they harass and assaulted those who need to use the ATM’s. They block the entrances and spread their belongings out. Some even use these vestibules as toilets.

A customer was scalded when a crazed man tossed a cup of boiling hot coffee in his face in an unprovoked attack at a Chase Bank ATM in midtown.

Banks have been forced to hire security guards and now Chase is closing the spaces between 5 and 6pm to combat the situation.

How much more do we have to lose until crime is taken into account?

Suzanna BowlingJanuary 28, 2023
Read More
Scroll for more
Tap
Why Purchase a Circle Chair?
Adam Klotz Fox News Weatherman is Beaten and Put In The Hospital and The Teens Have Been Let Go