What Doesn’t Make Sense About The NYC Blackout 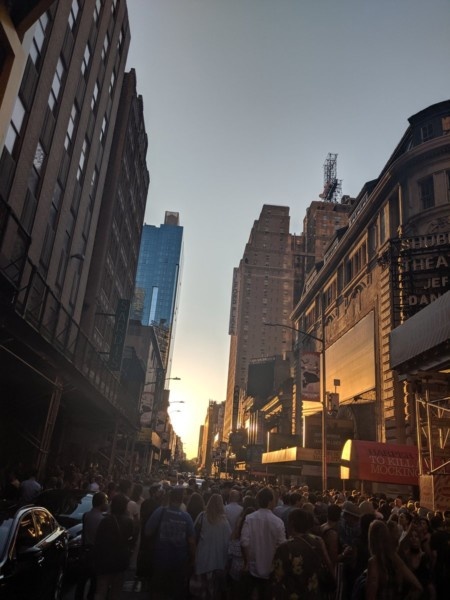 What Doesn’t Make Sense About The NYC Blackout

I was headed back to my home from seeing a show at NYMF. I stopped in a deli to get something to drink and the lights went out. That was at 7:05pm. I know because I took out my phone to get out my flashlight app. The deli’s owners called upstairs and the whole building was out. I went outside and from 43rd to at least 54th on 10th Ave there was blackout.

Being a journalist I called various friends to see if they had power. Yes, at 26th Street and 10th, Yes, on the east side. No lights at Rockefeller Center and 5th. Then I called friends in other states to see if they could get me more information either on the internet and or TV as my apartment was in the black. There was nothing reported until 8:15 at least an hour after it started. Why?

No one knew what area’s were hit. Even now they are vague stating Fifth Avenue west to the Hudson River, and from the west 40s north to 72nd Street. Yet there are reports down in Greenwich Village.

According to Con Ed first it was 42,000 people then hundreds of thousands of people in Manhattan, then 73,000. What is the actual number?

According to the news Broadway went dark along with much of Midtown and the Upper West Side around 6:55 p.m.. According to the very little coverage, a Con Ed equipment failure cut off power. Straphangers were led out of subway tunnels. Firefighters helped those trapped in elevators. More than 400 elevators got stuck. Blizzards may not stop a Broadway show, but a blackout will as shows shut down for the night. Shows like Hadestown, Waitress, Come From Away and Carnegie Hall took to the streets to not disappoint audiences.

When there’s a blackout at @hadestown we take the party outside! #oohitsablackout pic.twitter.com/DCOwQWqRaq— Kimberly Marable (@misskimizzo) July 14, 2019

The last blackout hit 42 years to the day in 1977 and wiped out electricity across nearly all of the city.

Where Was The Mayor?

Mayor de Blasio cares more about his presidential candidacy, as he was campaigning in Iowa. De Blasio flew home Sunday morning. It took him over an hour to even tweet about the blackout and then claimed it was a manhole cover and gave NO information. Con Ed also stated a man hole near West 64th St. and West End Ave blew, but now their stories have changed.

He then stated: “This appears to be something that just went wrong in the way that they transmit power from one part of the city to another.”

“With the power back on, I’ve directed City agencies to investigate this evening’s blackout. They’ll work with ConEd to get to the bottom of what happened tonight and prevent another widespread outage like this. https://t.co/r8Cl41SDsU— Mayor Bill de Blasio (@NYCMayor) July 14, 2019

de Blasio also stated on Sunday “A 13,000-volt distribution feeder circuit on the west side of Manhattan malfunctioned at 6:47 p.m. Saturday, cutting electricity to 60 blocks stretching from the Greenwich Village neighborhood to the Upper West Side on the 42nd anniversary of a 1977 near-citywide blackout that led to widespread looting and vandalism.”

Gov. Andrew Cuomo, immediately deployed New York state troopers during the outage. On Sunday he went to inspect the transformer that caused the power failure with Con Edison Chairman John McAvoy to figure out exactly what happened.

de Blasio also stated “When you’re a mayor or a governor you’re going to travel for a variety of reasons. The important thing is to have the hand on the wheel, make sure things are moving effectively and communicate to people. Even from where I was, I was able to do that right away with the people of New York City”.

Cuomo said Saturday night that he can count “on my fingers” the number of trips he’s taken outside the state during his eight years as governor.

Electricity started to come back at around 10 p.m.. Con Edison said all power was back on at around 11:40 p.m.

My question and the questions that should be on everybody’s mind should be in the age of internet connection and cell phones, why did it take over an hour for any news agency to report this ? Why did it take until late last night to tell New Yorkers what area’s were effected, when the Daily Mail had this information? And how does Con Ed not know what happened? It seemed Verizon had a clue because a friend of mine who owns a business was sent an e-mail from Verizon stating they expected outage last night and this was before the blackout.