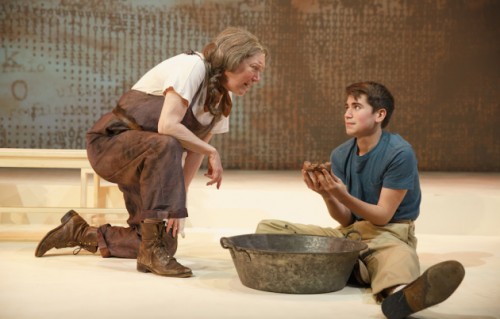 A. R. Gurney ‘s revival What I Did Last Summer is touching, warm, an homage to a gentler time, when war abound and children looked for mentors to come-of-age. Here 14-year-old Charlie Higgins (Noah Galvin) is out of control, rebelling at every thing and anything. It is the playwright looking back at his past and allowing the audience to see how he came to be. It is honest and revealing, haunting in its revelation. You see it took the demise of one soul to bring out the potential in another.

Jim Simpson’s direction is absolute genius using a barley blank crème colored stage with few props, drums and the projection of a typewritten page explaining to us what was inside the writer’s head. In a sense the play is three dimensional. In the play all characters think the play is about them and we see the self absorbed attitude that led family members not to see the crisis each one of them is facing. As the typewriter writes, “we should be aware of things in the process of being fabricated or made: the characters by actors; the setting by the manipulation of simple scenic elements; the play itself by its obviously traditional and presentational form.” You see the audience is being manipulated into seeing what is not always before our eyes.

Taking place at Lake Erie in 1945, most of the men are gone due to the war. The Higginses, have relocated to a vacation home on the Canadian side minus Dad, who is serving in the Pacific. Mom, Grace (Carolyn McCormick), Elsie (Izzie Steele), is collage bound and Charlie (Mr. Galvin), who is angry, rebellious with energy abound. He hangs with Bonnie (Juliet Brett) and a slightly older Canadian Ted (Pico Alexander) who works for his father for $.50 an hour. Bored with household chores, studying Latin and wanting to look good in Bonnie’s eyes he works for $.25 an hour — plus free lessons in art and self-actualization from Anna Trumbull (Kristine Nielsen), a bohemian known as the Pig Woman. Anna was part of the white elite, until she helped Charlie’s mother and became an outcast. She helps Charlie see the prejudices of his class. Anna’s attempts to find the artistic side of Charlie, broaden his horizons and open his soul. In the end Charlie gains what Anna gave him and loses herself in the bargain.

The cast is excellent especially Pico Alexander, but this is Ms. Nielsen show and she deserves to be remembered come the next award season.This play will remind you of Brighton Beach Memoirs.