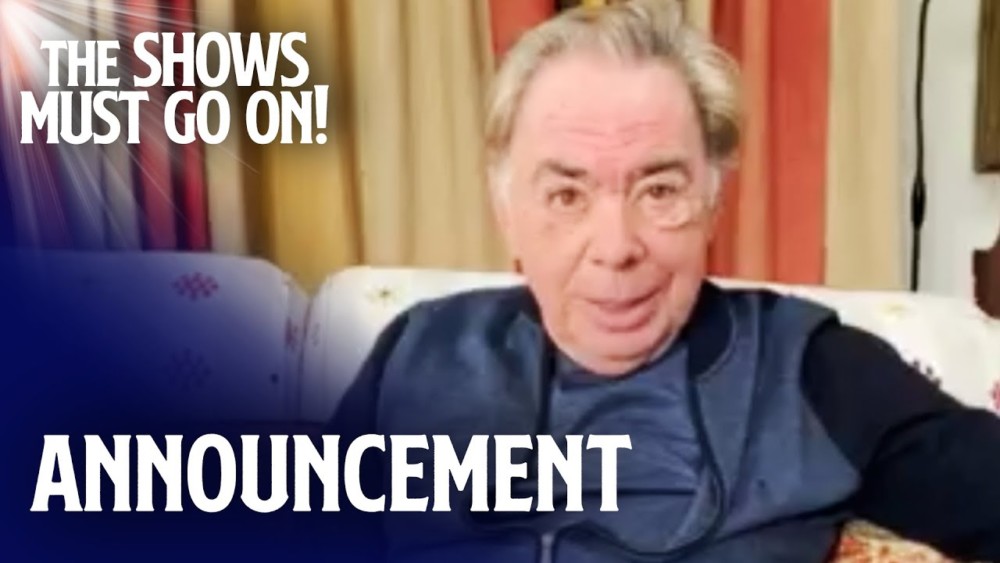 Lord Andrew Lloyd Webber is calling all musical lovers! Starting this Friday, we’ll be releasing a full-length, smash-hit musical once a week for you to watch for free! It will be available for 48 hours, so you can tune in whenever you like over the weekend! First up, it’s Joseph and the Amazing Technicolour Dreamcoat!

On Seth Rudetsky fabulous series Stars in the House the show that has two performances everyday. At 2pm: Orfeh, Andy Karl, & Bill Berloni and at 8pm: Randy Rainbow.

5pm: Folksbiene Live! Folksbiene regular Joe Mace shares a collection of songs in English Yiddish and “a few languages in between.”

7:30pm: Isolating Together: A Virtual Toy Theater Festival Miniaturist maestros from around the world one together for a two-night celebration of micropuppetry. John Bell plays host; 20 artists or groups of artists have filmed and submitted their teensy creations. Yesterday’s half can be viewed here.

Ethan Slater sings “The Ballad of Czolgosz” was to play the Balladeer in Classic Stage Company’s revival of the Stephen Sondheim and John Weidman’s Assassins. Slater and band members from the production share a number about the man who shot William McKinley in 1901.The video is a fund-raiser for the Actors Fund.

The Prince of Egypt, the new musical based on the acclaimed DreamWorks Animation film, is pleased to announce that Ghostlight Records will release its original cast recording on digital and streaming formats on Friday, April 3. A physical CD will be available later this year.

With a cast and orchestra of almost 60 artists, “this truly phenomenal production” (BBC London) has music and lyrics by Grammy® and Academy Award®-winner Stephen Schwartz (Wicked, Pippin, Godspell), a book by Philip LaZebnik (Mulan, Pocahontas) and features 10 brand new songs written by Stephen Schwartz, together with five of his acclaimed songs from the DreamWorks Animation film (“Deliver Us,” “All I Ever Wanted,” “Through Heaven’s Eyes,” “The Plagues,” and the Academy Award®-winning “When You Believe,” which was a global hit for Whitney Houston and Mariah Carey.

Michael Lee Brown, recent star of Dear Evan Hansen on Broadway, just released his new single “Rhythm of You.” Michael’s original songs have been described as “bubbling with heart, spirit and a refreshing brand of sing-along familiarity that veteran songsmiths struggle to achieve.” His new single, as well as his previous EP, Way It Used To Be, can be heard on all streaming services worldwide. He also has more music coming soon.

Michael’s new podcast, SimpLEEfy launched this week, where he hosts interviews with influential guests on how they simplify their daily lives in order to achieve their goals. SimpLEEfy will strive to provide a tranquil setting within our often chaotic world, to shed light on all of the simpLEE wonderful things happening in our life everyday. From art and creativity, health and fitness, everyday routines, and much much more.

You can listen to Michael’s new single “Rhythm of You” on all streaming services such as Spotify and iTunes, and SimpLEEfy can be heard on select major podcast platforms.

“All jazz is modern,” says Jazz at Lincoln Center’s Managing and Artistic Director, Wynton Marsalis—and we owe the 1950s for that. The momentous decade became the crucible in which modern jazz was formed, as styles like modal, hard bop, third stream, and more melted together and artists like Miles Davis, Duke Ellington, and Ornette Coleman reached the height of their powers.

Now, Crenshaw has taken inspiration from the era to create The Fifties: A Prism, the newest Blue Engine album. He says, “When I was presented with the idea of coming up with a suite dealing with the 1950s, I immediately realized this was going to cover all the genres of jazz, from bebop to freedom music. The 50s had a mix of the well-established and the up-and-coming musicians and composers to bless this music; if most of them got along, so can we.”