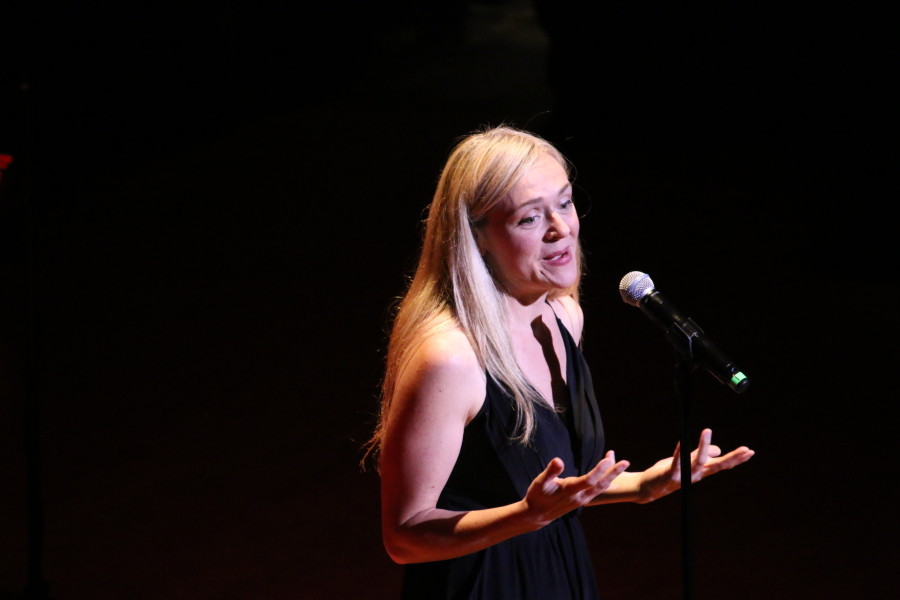 St. Francis Preaches to the Birds Playing on Air. An audio play by David Ives sarring Carson Elrod, Julie Halston, and Matthew Saldivar with cameos by Lois Smith and Ives. In the middle of the desert, two vultures find their lunch interrupted by a man of faith. Now, they have a bone to pick with Saint Francis of Assisi.

10am: State vs. Natasha Banina Discussion By ArtsEmersonCherry Orchard Festival. Directed by Igor Golvak and starring Darya Denisova. State vs. Natasha Banina unfolds as a Russian teenager tells the story of her life in a small-town orphanage, and how her desire to be free led to a crime of passion. From the inside of a “Zoom court room,” she makes unique appeals to the audience/jury, letting them into her world where she dreams of love, family, and her future. Ultimately, the audience will decide whether she is guilty of manslaughter.

The partnership will include a virtual theater talk with Golvak and Chinese theatre director Wang Chong.

12pm: Hundreds of Thousands By The Public Theater. Obie Award-winning theatre artist and activist Stevie Walker-Webb (director of Ain’t No Mo’ at The Public) will stage Hundreds of Thousands, a 24-hour public demonstration (which started August 22 at 5 PM ET), relegating himself to a 6ｘ9 foot space on the grounds of the McLennan County (Highway 6) Jail in Waco, Texas, to mark the 122nd day that his brother, Steven Waday Walker-Webb, has spent in solitary confinement.

2pm: LimeFest: The Evening Melody 15 minute virtual performance between Iran and the US. New York based Iranian theatre artist, Deniz Khateri has designed and produced it to experiment with the online theatre medium as a means of the first theatrical live collaboration between these two countries.

The piece is a glance at the life of Maryam Shoja, a news reporter in Tehran. Two performances happen at the same time with the audience able to watch both the Iranian version and American version simultaneously while choosing the language they want to hear.

Deniz wants to experiment with audience participation in virtual theatre as well as the role of language and how the aesthetics and choices of these two cultures are similar or different, especially considering that these countries supposedly have no official communication.

Iran’s production is directed by Deniz Khateri and performed by Sarvenaz Nankali. Costume design is by Zohreh Rahmani, with public relations by Sara Haddadi, and poster by Arvin Fouladifar.

7pm: Mirror Theatre: Hands of Light a benefit for AWARE Written by Bernard Pomerance (author of last season’s Miranda), Hands of Light, inspired by the tale of Kng Midas, tells the story of a leader whose greed destroys lives, and sets people against each other, with tragic consequences.

Hands of Light’s cast is composed of Vermont actors our community knows well, having seen them many times: Abigail Demers, who has been in our plays since she was Brigitta (she stole all the reviews!) at age 7 in our acclaimed Sound of Music, Krissie Ohlrogge, Jim Hogue (also running for Lt Governor) Mariana Considine and GAAR company members Marla Schaffel, our Tony-nominated Artist in Residence, with Nicole Ansari, Queen Gertrude in GAAR’s 2015 Hamlet, and Michael Tomlinson, who will play King Midas.

The new plays were written in 48 hours July 17–19, then rehearsed and recorded during an additional 48-hour period July 24–25.

For this year’s festival, playwrights were inspired by the same six Black plays from 48 Hours in..’s. inaugural year.

7:30: Humperdinck’s Hansel and Gretel Originally conceived as a small-scale vocal entertainment for children, Hansel and Gretel resonates with audiences of all ages and has become one of the most successful fairy-tale operas ever created. Humperdinck’s adaptation of the Brothers Grimm acknowledges the darker features present in the source material yet presents them within a frame of grace and humor. The composer was a protégé of Richard Wagner, and the score is flavored with the sophisticated musical lessons that he learned from his idol while maintaining a charm and a light touch that were entirely Humperdinck’s own—resulting in a work that has garnered approval from such diverse and demanding critics as children and musicologists.

8pm: The Seth Concert Series: Rachel Bay Jones Rachel Bay Jones is best known for originating the role of ‘Heidi Hansen’ in the Original Broadway Cast of Dear Evan Hansen, and received a Tony Award®, Emmy Award, Grammy Award, Lucille Lortel Award, and Drama League Nomination for her performance. She can currently be seen on the hit ABC series “Modern Family,” CBS’ “God Friended Me,” and in the feature film Ben Is Back, opposite Julia Roberts. She stars in the upcoming feature film Critical Thinking, directed by and opposite John Leguizamo. Additional Broadway credits include Pippin, Hair, Women on the Verge of a Nervous Breakdown. Off-Broadway & Regional/National Tour include Dear Evan Hansen (Drama Desk Nomination) at Second Stage, First Daughter Suite at The Public Theater, Hello Again, A Christmas Story, Pippin, Sylvia, and The King and I. On television, Rachel recently appeared on NBC’s “Law & Order: SVU,” ABC’s “The Family,” and the FX series “Louie.” She is currently touring her new solo concert series Something Beautiful, and her debut solo album ShowFolk can be purchased on iTunes and Amazon.

8pm: Plays for the People: Buttafly Precinct By Black Lives Black Words International Project. Written and directed by Sha Cage. Two young girls struggle to survive on the streets carrying a dark secret and a jar of butterflies across the city of Minneapolis on the eve of George Perry Floyd’s murder. With the backdrop of the historic Uprising and in the blink of an eye, they discover truth, betrayal, and magic while coming of age on the streets that refuse to call them by their true names.

8pm: Virtual Rule of 7×7: LimeFest Edition an ongoing series that premieres 7 new short plays by 7 different writers. For each round of 7×7, every playwright devises one rule & then each playwright creates a new piece incorporating ALL 7 rules…. And 7×7 is now a NEW YORK TIMES and TIME OUT NEW YORK pick for quality virtual content!