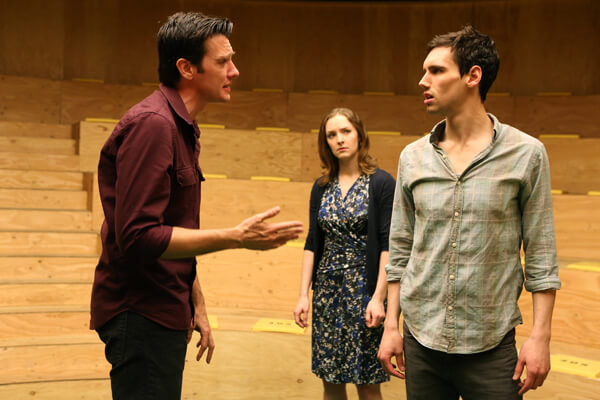 Corkscrew 4.0 through August 23. What was going to be the fourth annual  Corkscrew Festival has been delayed until August 2021. HOWEVER, in the meantime, “the creative teams behind the five world premiere productions have adapted, reimagined, and exploded their plays, ending up with five unique interactive web experiences.”

So, for example: “In Yankees, it’s Study Abroad Florence 2015! Introduce yourself to the Facebook group, check out the program website, and get ready to become a citizen of the WORLD…’

Today Rodgers & Hammerstein (with a special focus on Carousel and The King and I) with special guest singer/pianist, Daryl Sherman, who has – as Michael Feinstein notes – “Taste, charm, singing, playing―as good as it gets.”

3pm: The Seth Concert Series: Liz Callaway Tony nominee Liz Callaway performs highlights from some of her biggest roles, like Merrily We Roll Along, Miss Saigon, Baby, and Cats.

6pm: Cock Michael Hsu Rosen (Torch Song) will star with Ron Bohmer, Nick Rashad Bourroughs, and Charnette Batey in this play by Mike Bartlett (King Charles III) that received raves in a 2012 production Off-Broadway, although some publications refused to mention the title. When John takes a break from his boyfriend, his accidentally meets the girl of his dreams. Filled with guilt and indecision, he decides there is only one way to straighten this out..

7:30pm: Puccini’s Manon Lescaut  When he set out to write a new opera based on the same irresistible heroine that inspired Massenet’s popular Manon, the young Puccini was undaunted by the risk of provoking comparisons. As he explained: “Why shouldn’t there be two operas about Manon? A woman like Manon can have more than one lover.” And in his take on the alluring young country girl who becomes the toast of Paris before suffering a swift fall and ignominious end, Puccini came through with a masterpiece equal to Massenet’s, trading the French composer’s urbane elegance for overwhelming emotionality.

7:30pm: M-O-U-S-E Breaking Through Barriers The last of eight new plays from the festival entitled Voices from the Great Experiment, which will be presented on TBTBTheater’s YouTube channel every night at 7:30 through August 10. This one is by Christopher Chan Roberson. Directed by Kimille Howard. Company: Scott Barton, Nayab Hussein, Ayako Ibaraki, Sean Phillips

7:30pm: I Am Here Planet Connections Zoom Fest A new batch of plays online on specific themes every Monday in August. This week: “Monologues and short plays exploring fiercely unapologetic, female creativity, and imagination.” Whitewashed by Lynda Crawford, The TV Interview by Rohina Malik, The Essential Bronx by Desi Moreno-Penson, Till Hell Freezes Over by Tonya Pinkins and My Second Quinceanera by Noemi de la Puente. To make a reservation, email Kim Jones at PlanetKimJ@gmail.com.

8pm: Songs from an Unmade Bed B.D. Wong and videographer videographer Richert Schnorr create a series of music videos out of this song cycle by librettist Mark Campbell and 18 composers about the inner musings and romantic life of a gay man living in New York.