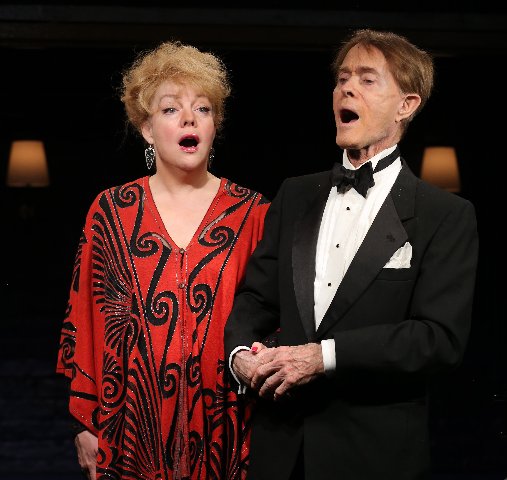 3pm and 8pm: Love, Noel Irish Rep. The songs and letters of Noel Coward, performed by Steve Ross and KT Sullivan transform into some of the many characters that made up Coward’s unique life…Gertrude Lawrence, Marlene Dietrich, Greta Garbo, Elaine Stritch, Lynn Fontanne, Virginia Woolf, Edna Ferber, the Queen Mother, and, of course, The Master himself, Noël Coward.

3pm: LAO at Home: Learn at Home (Grown-Up Edition) By LA Opera Bass-baritone (and self-described opera obsessive) Nicholas Brownlee hosts Il TRIVIAtore, a lively quiz game for opera fans of all stripes, from eager newcomers to seasoned aficionados. This week’s travel-themed quiz takes players all around the world of opera. This program is generously supported by the Tourist Office of Spain.

4pm: Why We Do It: Director and Playwright, Brandon Victor Dixon actor, singer and theatrical producer. Known for his Tony-nominated Broadway performances in The Color Purple and Shuffle Along, or, the Making of the Musical Sensation of 1921 and All That Followed. He originated roles in Motown: The Musical, The Scottsboro Boys and Hamilton.  He earned two Grammy nominations for Best Musical Theater Album.

As a producer, he was a part of the Broadway revivals Of Mice and Men and Hedwig and the Angry Inch; the latter won the 2014 Tony Award and the Drama Desk Award for best revival of a musical.

Dixon portrayed Judas Iscariot in NBC’s live concert Jesus Christ Superstar, for which he received a Primetime Emmy nomination for Outstanding Supporting Actor in a Limited Series or Movie.

5pm: Metropolitan Opera: La Fanciulla del West Puccini’s musical vision of the American West is vividly brought to life in Giancarlo Del Monaco’s atmospheric production. Deborah Voigt is Minnie, the girl of the title and owner of a bar in a Californian mining camp. Marcello Giordani sings Dick Johnson, the bandit-turned-lover hunted by the cynical sheriff Jack Rance (Lucio Gallo), who wants Minnie for himself. Complete with whiskey-drinking cowboys, gunplay, a poker game, and a snowstorm, La Fanciulla del West is Puccini at his most colorful.

7pm: Brave New World Rep: The Plantation Brooklyn’s acclaimed Brave New World Repertory Theatre presents a bold new adaptation of Anton Chekhov’s The Cherry Orchard set in 1870 Virginia after emancipation and the civil war, but before the onset of Jim Crow. The fully staged, site-specific production took place on Governors Island. The Plantation was designed specifically for the Commanding Officer’s House on Governors Island, migrating from locations in front, behind and inside the stunning pre-Civil War house in the historic Nolan Park section of the island.

Set in 1870, the year African American freedmen got the vote, Chekhov’s original story is universal in its humanity and humor, says adapter/director Claire Beckman, co-founder of Brave New World Rep. “As re-imagined in this context, the story has important historical significance for an American audience. The Plantation seeks to explore the root causes of some of America’s most pressing social issues with both humor and heart, while telling a story about Race in America.”

Set in 1950, the play focuses on Ernestine Crump and her family as they begin their new life in Brooklyn. Nottage (Ruined, Sweat) premiered the play at Off-Broadway’s Second Stage Theater; subsequent productions played South Coast Repertory, Steppenwolf Theatre, the Goodman Theatre, and more.

7:30pm: Verdi’s Rigoletto A Victor Hugo play, haunting and scandalous, provided the inspiration for Verdi’s mid-career masterpiece about a vengeful but misguided court jester, out to rescue his deflowered daughter from a duke’s licentious clutches. None of it ends well, but along the way, the composer introduces several of his most iconic arias and duets—as well as an 11th-hour quartet that counts among the finest moments in opera.

7:30pm: The Cooper Union: The Concert for Cooper This one-night-only benefit concert to support the school’s commitment to return to free tuition for all undergraduate students! The show features musical performances, celebrity readings, and “shout outs” from distinguished guests, which together tell the story of The Cooper Union—from the history of civic engagement in the Great Hall to the outsized impact of Cooper innovation in New York and beyond.

8pm: The Know Theatre: Feast Perhaps the way to honor our dead
Is to eat them. You are cordially invited to break bread, virtually, with one of the seminal monsters of literature: Grendel’s Mother, from the Anglo-Saxon epic, Beowulf. Share in her hard won victories and shattering griefs. Turn your collective gaze upon the wreckage of the 21st century, and find what it takes to maybe build a better world. And have a little treat. You deserve it.

Spend a few dollars more, and order tickets at least one week in advance, to receive a special Party Favor.

8pm: Stars in the House:  The 3 “Chers” from The Cher Show: Stephanie J. Block, Micaela Diamond, and Teal Wicks. Cancelled from yesterday

10pm: The Groundlings: The Crazy Uncle Joe Show A special ONLINE version of your favorite long-form improv show! Watch as The Groundlings Players begin with suggestions given by you, and then proceed to weave the stories together, traveling back and forth through time, playing different characters in many different situations. AND, they keep it up for an uncanny 60 minutes straight!