What To Watch For From The National Alliance for Musical Theatre 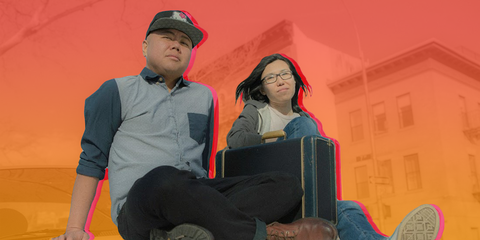 What To Watch For From The National Alliance for Musical Theatre

Interstate with book, lyrics, and music by Melissa Li, with book and lyrics by Kit Yan, I found to be the most producible. Interstate is about an Asian-American road trip. Dash, a transgender spoken word performer who embarks on his first national tour with his best friend Adrian, a lesbian singer-songwriter. Their political and personal music inspires Henry, a trans teenage blogger living in a small town in Kentucky, to make a series of life-changing decisions. A parallel story about two trans people at different stages of their lives, the musical explores love, family and masculinity in the age of social media. What was so great about this show is there is no political agenda, it just allows the story to speak for itself. Also the music is driving and really upbeat. The lyrics quirky and heartfelt.

Lautrec at the St. James, had the most beautiful lilting score by Julianne Wick Davis. The book and lyrics by John Dietrich seemed to need a little more tweaking. The show takes place in March 1899 – French artist, Henri de Toulouse Lautrec, passes out in a gutter and is kidnapped. He awakes in the Chateau St. James, an asylum. Triggered by his imagination and a need to understand his downfall, the St. James continuously transforms around Lautrec into an intoxicating and provocative world—one that inspires yet may destroy him.

Hi, My Name is Ben, captures the heart of life, but is this a show people could latch onto in other places other than New York? With book and lyrics by Scott Gilmour, music by Claire McKenzie, th story follows A true, New York story of how one man changed the lives of those around him, without ever speaking a word. Using just his notepad, pen and open heart, Ben turned a neighborhood of strangers into a community of friends, before finally encountering a miracle of his own. Conor Ryan was fabulous as young Ben and Joel Rooks made a lovable older Ben.

I was confused to see SeaWife set the festival considering I helped give this show a Drama Desk award 2 years ago. The music and lyrics are by The Lobbyists, book by Seth Moore, directed & developed by Liz Carlson, with musical direction by Tommy Crawford. SeaWife is a haunted tale of whale hunts, ghosts and adventure. I loved this show the first time I saw it and think it has legs.

I wasn’t in love with the next three. Teeth has book and lyrics by Michael R. Jackson, book and music Anna K. Jacobs and is adapted from the 2007 Sundance Award-winning indie horror film by Mitchell Lichtenstein, Teeth tells the story of Dawn O’Keefe, an evangelical Christian teen with a powerful secret: she has teeth in her vagina. When the men in Dawn’s life try to exploit her, she is forced to choose between survival or destruction. Will anyone over 25 want to see this?

Simon & Jorge Pay Their Student Loans is the dumb and dumber musical.
Book, music, and lyrics by Jesse Gage. This show had a great cast, but a show about two stoners in a bromance rock musical about the impending student loan crisis and ever-growing income inequality gap, is just is too young for me.

Iron John: An American Ghost Story with music and book by Jacinth Greywoode, with lyrics and book by Rebecca Hart was too complicated and the music seemed just to one note to me. Taking place in a Southern town of Good, Alabama, which is haunted, an act of racist violence repeats in every generation. One hundred years ago, a love triangle ended in an act of racist violence and keeps repeating. Love the concept.

This industry-only event showcases musicals in the final stages of development for producers and artists from around the world, helping them to find future life and development at regional theatres across the U.S. and the globe.

Sadly I missed One Way starring the brilliant Jenn Collela. With
music and book by Ben Bonnema, lyrics and book by Christopher Staskel, direction by Arpita Mukherjee, Naomi becomes a finalist for the first one-way mission to Mars, she must choose: pursue her ambition or stay on Earth with the woman she loves. One Way is a moving portrait of how our choices affect those closest to us.