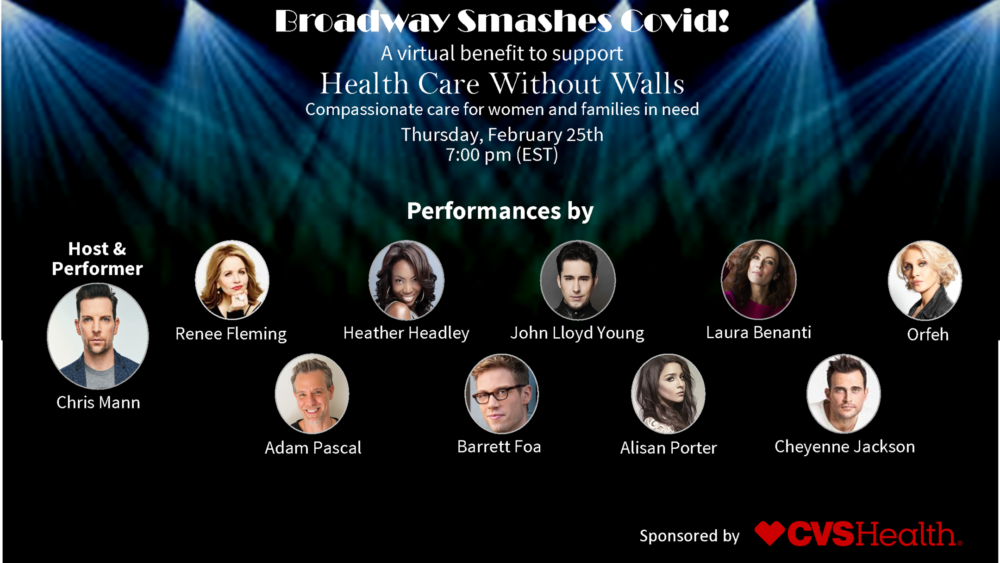 6:30pm: The Things Are Against Us Susan Soon He Stanton’s The Things Are Against Us will be the next production in MCC’s LiveLab one-act digital reading series. Ellie Heyman directs the cast, which includes Juan Castano, Emily Davis, Susannah Flood, Babak Tafti, and Danny Wolohan, in tthe play set in a mysterious house with a mind of its own. The production will stream on MCC’s YouTube Channel February 25 at 6:30 PM ET.

7pm: Broadway Smashes COVID A star-studded evening of music and laughter with performances by Tony and Grammy Award winners, operatic icons, televisions celebrities and YouTube sensations to benefit Health Care Without Walls (HCWW), a nonprofit that provides free medical care to a growing number of homeless women and children in Greater Boston.

The aim of the Business of Broadway’s work is to demystify the process of creating and producing a Broadway show, and to offer theatre makers – and all those interested in the process – valuable insight into the world of commercial theatre producing at large.

In this session, the BoB founders will examine how a show is produced and examine the underlying business model that fuels that process. Following the class, there will also be an opportunity for Q&A with these theatre professionals.

7:30pm: Verdi’s Ernani This early Verdi masterpiece is based on a Hugo drama, whose complicated plot concerns a young woman and the three men vying for her affections—her elderly uncle, a king destined to become Holy Roman Emperor, and a bandit who is actually an overthrown nobleman. Though there is plenty of action arising from the various passions and grudges scattered among these characters, the opera is best appreciated as a feast of beautiful and dramatic Italianate singing. With virtuosic roles for a quartet of principals, the opera delivers one feat of heroic vocalism after another.

Processing… Theatre East announces another world premiere, Processing…, a play centered around four NYC high school seniors whose lives have been upended by the lockdown and sudden death of a beloved computer science teacher. Until the 27.