What to Watch in The New Year: Jan 29 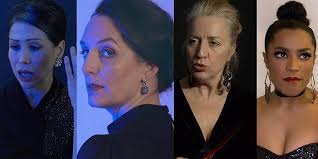 What to Watch in The New Year: Jan 29

3pm: The Gifts You Gave to the Dark (Origin 1st Irish Theatre Festival) Darren Murphy’s The Gifts You Gave to the Dark, kicked off Irish Rep’s digital summer season in May in its world premiere. It was written specifically for digital media in reaction to the ongoing COVID-19 health crisis. Confined to his bed in Belfast with COVID-19, Tom is unable to visit his mother, Rose, who is dying in Dublin. In this last phone Tom tells his mother the story of a journey – an image of a perfect day they once shared. It’s a Belfast story, and it’s the very last thing he can do for his mother – the only thing he can do for her. As he speaks, he takes his mother home on her final voyage, during the last ten minutes of her life.

6pm: A Shero’s Journey Or What Anacaona And Yemayá Taught Me (African Caribbean Mixfest 2021) In this play by Guadalís Del Carmen, Zoila leaves everything behind after tragedy strikes, embarking on a journey with two ancestral figures

7pm: The Black Queen Screen Tests, Act 2 By The Tank Created by Jerome A Parker. An ALL-BLACK, virtual, workshop production of “The Black Queens, or House of Dinah” built to elevate the theatricality and explore the “live.” On November 20th, 2020 – after a series of in-house workshops – the Tank hosted a live stream of our experiments. But most importantly, this endeavor was created and entirely run by a 20+ team of BLACK creative artists, artisans and technicians.

7:30pm: Lungs By Old Vic Last July, stage and screen stars Claire Foy and Matt Smith reunited for a string of socially distant performances of Lungs at the Old Vic in London.

7:30pm: Wagner’s Der Fliegende Holländer The earliest of Wagner’s operatic creations to remain in the standard repertory, Der Fliegende Holländer marks the true beginning of the composer’s remarkable career as an innovative and revolutionary artist. The score is an extraordinary combination of operatic lyricism, theatrical insight, and magnificent effects. And while many of the features of conventional opera can be found in this work, the way that Wagner integrates them into the fabric of the score clearly foreshadows his later technique of a continuous musical flow. The two lead roles also represent archetypes to which he would return in his later works: the otherworldly outsider and the woman who sacrifices herself for his salvation.

8pm: Belfast Blues Theatre@Home Winter Festival at Irish Rep. Autobiographical stories written and performed by Geraldine Hughes are rooted in her perspective as a little girl coming of age in the war-torn Belfast of the 1980s.

8pm: The Scourge (Origin 1st Irish Theatre Festival) “Death by a thousand cuts” – that’s how Michelle Dooley Mahon describes Alzheimer’s disease after witnessing it strike down her mother Siobhan. As Mahon relives that time, her humorous and moving memories and rapier-like observations introduce personalities, history, and a nostalgic archive of an ordinary Irish small-town family forced to become extraordinary in their attempt to cope.

8pm: The ShowBiz Quiz: Broadway Records By Playbill The ShowBiz Quiz, where Broadway and Theatre Trivia combine into the most feverous fun online! Play seven quiz-tacular rounds of trivia – with prizes and surprises around each corner. Remember: “the faster you answer correctly, the more points you earn!”

Stephen SorokoffSeptember 23, 2022
Read More
Scroll for more
Tap
The Glorious Corner
Cicely Tyson Is On Her Way To Bountiful