What to Watch in The New Year: Jan 31 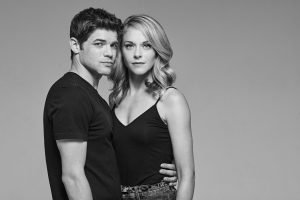 What to Watch in The New Year: Jan 31

2pm: On Beckett / In Screen By Irish Repertory Theatre Tony winner Bill Irwin (Who’s Afraid of Virginia Woolf?) this piece, adapted from his 2018 solo show, in which he explores a performer’s relationship to Beckett in the time of COVID.

Cathy Belton, Derbhle Crotty, and Aisling O’Sullivan portray three women, two of them sisters, who have drifted apart and are now catching up over coffee. Over the course of three conversations spanning five years, we learn that they have allowed relationships with their partners to come between their relationships with each other. Gradually, a common secret of tragic consequence is revealed.https://player.vimeo.com/video/461613503

5pm soundcheck and 8pm concert: Jeremy Jordan & Ashley Spencer. Jeremy Jordan recently starred on Broadway opposite Kerry Washington in the provocative new play, American Son, and then reprised his role in the Netflix film adaptation of the show. Next up is his lead role as seminal record producer and Casablanca Records founder Neil Bogart in the feature, Spinning Gold, and starring as Seymour in the New York production of the iconic Little Shop of Horrors. Other films include The Last 5 Years opposite Anna Kendrick, Joyful Noise with Queen Latifah and Dolly Parton, and Newsies. His TV work includes series regulars on CW’s Supergirl, NBC’s Smash and Disney Channel’s Tangled, and guest starring on The Flash, Elementary and Law and Order: SVU. Other Broadway shows include his Tony-nominated starring role in Newsies, playing Clyde in Bonnie & Clyde (Theatre World Award), starring as Tony in West Side Story, and playing leads in Rock of Ages and Waitress. Follow @JeremyMJordan for concert and music updates.

Ashley Spencer was born and raised in Canton, Ohio. She began taking dance lessons at the age of four and later became a member of the Canton Ballet Company. After graduating high school, Ashley moved to New York City to pursue her dreams as a Broadway actress. Her first job was a touring show called Barbie Live in Fairytopia. She then auditioned for Grease: You’re The One That I Want!, a reality show casting the roles of Sandy and Danny in the Broadway revival of Grease. She went on to star on Broadway as Sandy, as well as Amber in Hairspray, Sherrie in Rock of Ages and one of three Divas in Priscilla: Queen of the Desert. She appeared regionally in Les Miserables, The Producers, Curtains and Crazy For You.

7pm: The Black Queen Screen Tests, Act 3 By The Tank Created by Jerome A Parker. An ALL-BLACK, virtual, workshop production of “The Black Queens, or House of Dinah” built to elevate the theatricality and explore the “live.” On November 20th, 2020 – after a series of in-house workshops – the Tank hosted a live stream of our experiments. But most importantly, this endeavor was created and entirely run by a 20+ team of BLACK creative artists, artisans and technicians.

Meet Me in St. Louis, with a book by Hugh Wheeler and songs by Hugh Martin and Ralph Blane, concerns the Smith family as they grapple with life changes and new love in a bustling St. Louis on the brink of the 1904 World’s Fair.

This new digital production is an abridged version of the 1989 Broadway musical, based on the 1944 film of the same name starring Judy Garland. Irish Repertory last presented the show in 2007.

Meet Me in St. Louis will also have musical direction by John Bell, orchestrations by Josh Clayton, scenic design by Charlie Corcoran, video editing by Meridith Sommers, sound design and mix by M. Florian Staab, and lighting design by Michael Gottlieb. Tracy Christensen is the costume consultant, Pamela Brusoski and Rebecca C. Monroe are the production managers, and Simon Patrick Geaney is the production assistant.

10pm: Under a Baseball Sky Old Globe As part of this San Diego theater’s eighth annual Powers New Voices Festival,playwright José Cruz González tells a story about baseball’s deep roots in the Mexican American community.  When troublemaker Teo is assigned to clean up a vacant lot belonging to the elderly Elí O’Reilly, these two unlikely friends form a bond forged in history and America’s pastime