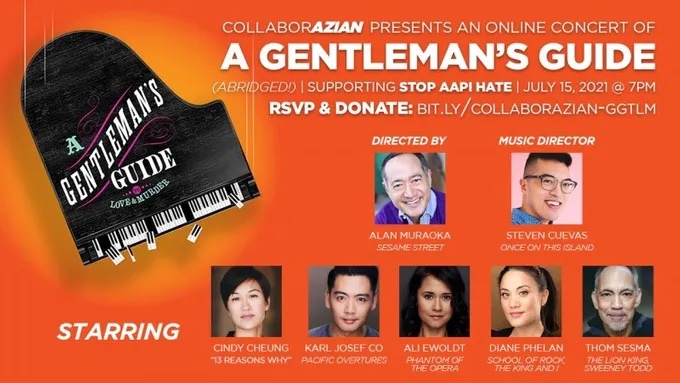 2021 Jimmy Awards This national talent showcase celebrates high school students from across the country and features dynamic ensemble and solo performances. Presented by the Broadway League Foundation, 20 scholarships are set to be awarded at this year’s show.

7:00pm: All-Asian American production of A Gentleman’s Guide to Love and Murder. Donations for StopAAPIHate.org are now being accepted and tickets for the virtual show are now available. CollaborAzian’s A Gentelman’s Guide to Love and Murder will be helmed by theatre and television director Alan Muraoka, who has played Alan, the owner of Hooper’s Store on Sesame Street for the past 23 years. He most recently played Iago in Disney’s Aladdin on Broadway, and starred as the Engineer in Miss Saigon. The all-Asian American cast will star Cindy Cheung (13 Reasons Why), Karl Josef Co (Pacific Overtures), Ali Ewoldt (The Phantom of the Opera), Diane Phelan (School of Rock), and Thom Sesma (Sweeney Todd). Steven Cuevas (Once On This Island) serves as music director.

7:30pm: Piaf  Olivier winner Jenna Russell stars as Edith Piaf in this Nottingham Playhouse production of Pam Gems’ play with music about the life of the famed French singer.

7:30pm: Puccini’s Madama Butterfly Anthony Minghella’s exquisite production—an instant classic at the Met since its 2006 premiere—provides an evocative setting for this tragedy about a noble but naive geisha awaiting the return of her American Navy lieutenant. Key to the staging are symbolic visuals that tap into traditional Japanese culture while honoring the searching, timeless beauty of Puccini’s mid-career masterpiece. The production never distracts from the heartrending tragedy; instead, it complements the composer’s powerful score at every turn.