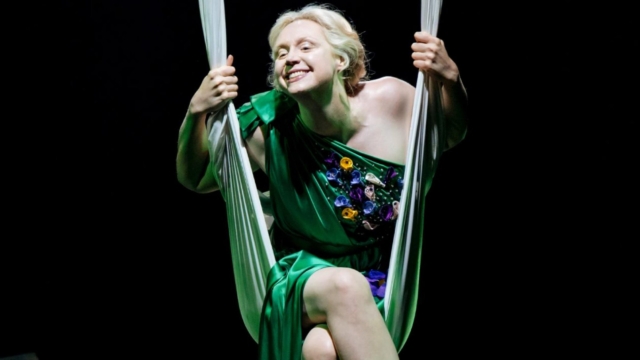 1pm: The Broadway Q&A Series: Jerry Mitchell: Two-time Tony Award–winning performer, choreographer, and director will answer questions about his multi-hyphenate career—which includes working on Broadway productions of Hairspray, Kinky Boots, Legally Blonde, and more—during the hour-long chat, which will be available to watch on demand following the live stream. Mitchell will be joined by some of his favorite performers during the broadcast, including Billy Porter, Annaleigh Ashford, and Matthew Morrison.

1pm: Primary Stages Lunch and Learn: Sara Holdren For all of the playwrights, aspiring writers, and those brand-new to the craft – if you’re seeking community and connection, we want you to have lunch with us…online!

2pm: Learn with Carnegie Hall Join alumni of Carnegie Hall’s three acclaimed national youth ensembles—the National Youth Orchestra of the United States of America (NYO-USA), NYO2, and NYO Jazz—as they help the incoming class kick off its online summer program. Enjoy archival footage from past tours and performances, preview what the new group of young musicians will be up to this summer, and listen to conversations between alumni and the artists who coached them, reflecting on how their experiences in the ensembles have shaped the trajectory of their lives and careers.

4pm: Why We Do It: Natasha Lyonne joins The New Group Founding Artistic Director Scott Elliott for a conversation about theatre and performance.

5pm: Watch Me Work: Suzan Lori Parks this is a performance piece, a meditation on the artistic process, and an actual work session, featuring Suzan-Lori Parks working on her newest writing project. RSVP

5pm: Metropolitan Opera: Rusalka  World premiere: National Theater, Prague, 1901. Dvořák opera about the water nymph Rusalka has fallen in love with a human—the Prince—when he came to swim in her lake. Now she wants to become human herself and live on land to be with him.

7pm: Richard II Shakespeare@ will launch a series of audio plays July 1 with a production of Richard II, adapted and directed by Artistic Director Sean Hagerty. The historical depiction of the British monarch will star Jamie Ballard (Harry Potter and the Cursed Child) in the title role. Joining the West End alum in the cast are Derek Wilson as Henry Bolingbroke, Jonathan Forbes as Thomas Mowbray/Bagot, Aria Shahghasemi as Aumerle, Andrew Sellon as Duke of York, Ashlie Atkinson as Duchess of York, and Keith Hamilton Cobb as Northumberland. The ensemble is rounded out by Mark J. Quiles, Jahsiah Mussig, Philip Buck, Charlotte East, and David Hargreaves.

Presented in three weekly episodes, Richard II will feature original music by Joan Melton with sound design by Dan Gerhard and Ellen Fitton of Sonic Designs. Justin Goldner is the music producer and supervisor; casting is by Robin Carus. Sydney Steele is the associate producer.

7pm: LAO at Home: Living Room Recital Mezzo-soprano Sasha Cooke, who made her memorable LA Opera debut as Hansel in 2018, sings a recital with her husband, baritone Kelly Markgraf, and pianist Bryan Banowetz, featuring the world premieres of songs by composers Kamala Sankaram and Joel Puckett, as well as some classic show tunes.

The “young, gifted, Black…and cast” Zoom room is free for any current African-American High-school or College students. The encouraged donation for Adults is $5.00 towards the Next Wave Initiative.

Founded by Douglas Lyons (Beautiful, Beau), The Next Wave Initiative is a developmental branch of The Directors Company, committed to amplifying future Black voices in The American Theatre.

7pm: New York Theatre Barn to Live Stream Excerpts From New Musicals Hide and Seek, Two Maiden Ladies, The Hippie and the Hitman and The Perfect Fit. Hide and Seek, written by 18-year-old Danny Feldman, is a semi-autobiographical musical that chronicles the journey of a high school sophomore who struggles to come to terms with his newfound sexuality. As he attempts to find his true self, he learns more about living life authentically. The show has played four sold-out concert performances at Feinstein’s/54 Below. Feldman will present a song from the show performed remotely by Justin Albinder (Jersey Boys).

Two Maiden Ladies has book, music and lyrics by 16-year-old Abigail Greenwood, whose multiple musicals went viral on Instagram, YouTube, and TikTok. Two Maiden Ladies tells the untold true story of Charity Bryant and Sylvia Drake, who met in 1807 and lived together for the rest of their lives as a married couple. Abigail’s first musical Antonia (The Marie Antoinette Musical) was produced when she was 15 years old. Greenwood will present a song from the show performed remotely by Presley Ryan (Beetlejuice, Fun Home).

The new musical The Hippie and the Hitman has book, music and lyrics by Elise Marra, the 16-year-old writer of the new musical Frankie!, recently released on Broadway Records and featuring Tony nominee Caitlin Kinnunen in the title role. The lives of a hippie activist and a hitman for the Irish Republican Army converge in 1975 when Ireland is divided by a civil war between the Catholics and Protestants. Marra will present a song from the show performed remotely by Elijah Caldwell (A Strange Loop).

The new musical The Perfect Fit has book, music and lyrics by 13-year-old writer/performer Joshua Turchin (Forbidden Broadway: The Next Generation, A Christmas Story National Tour). The Studio Recording EP of The Perfect Fit will be released by Broadway Records on July 17th, 2020 featuring Laura Benanti, Nikki Renee Daniels, and more, and is the first-ever fully orchestrated remote musical concept EP to be completely recorded virtually. Turchin will present a song from the show performed remotely by Grace DeAmicis (Harry Potter and The Cursed Child). The show follows a driven child actor who is sabotaged by a vindictive stage parent who would do anything for her daughter to succeed.

7:30pm: Shostakovich’s The Nose \It all begins with an absurd scenario: A hapless Russian bureaucrat wakes up one morning to discover that his nose has gone missing. He eventually locates his fugitive facial feature, which has been masquerading as a human being, but has no luck reattaching it. Based on a satirical short story by Nikolai Gogol, Shostakovich’s adaptation embraces the surrealism of the source material, supported by a dynamic and dizzying staging by artist-director William Kentridge.

7:30: Obsessions Of An Art Student by Carrie Robbins a group of actors, several of which were part of the original Ridiculous Theatre (created by Charles Ludlum), present an original short piece. Everett Quinton (Ridiculous Theatre), Shane Baker (yiddish translator/consult on Joel Grey’s Yiddish “Fiddler”), & Daniel Neiden (singer, oftime translator of Sholom Aleicham) & other talented folks are involved. Turn on your computer a bit before 7:30 and please join us via the link below:           https://us02web.zoom.us/j/88653181319

7:30pm: And So We Come Forth The Apple Family will once again reunite online for a second world-premiere Zoom play from writer-director Richard Nelson. Titled And So We Come Forth: A Dinner on Zoom, the virtual production will be streamed for free for eight weeks with proceeds going to The Actors Fund.

Set in early July 2020, amidst protests against racial injustice and the easing of coronavirus lock downs, And So We Come Forth will star Stephen Kunken, Sally Murphy, Maryann Plunkett, Laila Robins, and Jay O. Sanders, all performing from their homes.

8pm: A Mary’s Moxologist Tank Associate Artist Kev Berry returns for his fifth PrideFest with A Mary’s Mixology, the third installment in a cycle of full-length monologues about the intersections between queerness and the things that hold us back.

A Mary’s Mixology is a document of a fag’s first year on the wagon. What does it mean for a gay man to give up liquid courage? How does he stay brave in gay environments that often feel insidious after a certain point of the night? How does he not become a party pooper? Will he ever stop wanting a fucking margarita? This brutally honest Night at the Club knocks back a seltzer with a splash of grapefruit juice with ease and tries to define a potential future.

8pm: Brook Shield with the Moms