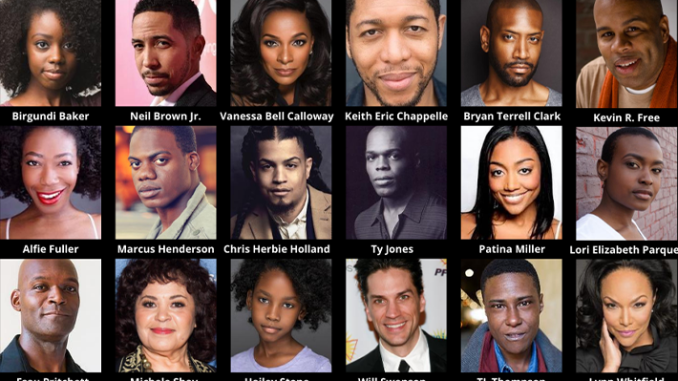 7:30pm: Old Vic: Three Kings The world premiere of Three Kings, a brand new play by Stephen Beresford written for and starring Andrew Scott, has been created especially for OLD VIC: IN CAMERA. This scratch performance will be streamed live directly from the iconic Old Vic stage with the empty auditorium as a backdrop for five performances only.
Three Kings is about fathers and sons, the gifts and burdens of inheritance, and the unfathomable puzzle of human relationships.

3pm: The Show Must Go Online:Julius Caesar  British actor and director Robert Myles launched The Show Must Go Online, a weekly online reading group—performed by actors via Zoom and live streamed on YouTube—that works through Shakespeare’s plays in the order they were written. Stephen Schnetzer as Julius and Dan Wilson as Brutus.

4pm: Why We Do It: Maulik Pancholy The New Group Founding Artistic Director Scott Elliott for a conversation about theatre and performance.

Since we’ve been thinking about “why we do what we do”, we’ve asked some of our immediate community of artists to join us for creative conversations that explore what continues to draw them to the theater, touchstones in their theater careers and what hopes they have going forward.

Immediately following the free “Why We Do It” conversations, audiences are invited to keep the insightful conversation going over virtual drinks with these artists via Q&A in “Drinks With,” an intimate scale Zoom setting, with a very limited number of participants, moderated by Scott Elliott.  Original drink recipes curated by Sammi Katz, creator of A Girl’s Guide to Drinking Alone (AGirlsGuidetoDrinkingAlone.com).  Please visit TheNewGroup.org/why-we-do-it to register and make a donation for the “Drinks With” events only, available for a $50 tax-deductible donation per participant per talk.

The company will be giving 50% of its donations each week to a different charity that supports black lives and civil rights.

Forget Me Not has a book and lyrics by Kate Thomas and music by Joey Contreras. Aladdin star Jacob Dickey, Amanda Lopez, Diana Huey, Kerstin Anderson, and Michael Williams are set to perform.

With a book by Mark St. Germain and music and lyrics by Zoe Sarnak, A Crossing follows the lives of several Mexican immigrants as they try to cross the US border.

7pm: HERE at Home: 837 Venice Boulevard The last Wednesday of each month at 7PM ET, HERE hosts a Facebook Watch Party to screen a full-length HERE production! Following the online premiere, these full-length videos will be available for viewing on Facebook until our building reopens for live public performances.

Using physical manipulation and humor, Faye Driscoll’s 837 Venice Boulevard paints the lonesome emotional landscape of a neglected kid left to her own fantasies and fears, while exploring universal themes of identity, blame, and how exhausting it is to have to “be somebody” all the time.

7:30pm: The Moth: Play It Again, Slam! In this hour, stories from The Moth’s SLAM Showcase – a night of storytelling do-overs for tales from The Moth’s archives that needed slight tweaks or a second chance. Standing out or fading away, chance encounters, and the importance of food. This hour is hosted by Moth Senior Director Jenifer Hixson. The Moth Radio Hour is produced by The Moth and Jay Allison of Atlantic Public Media.

Gabby Shea wants to impress her boyfriend’s family with her macaroni and cheese.

Jon Novick reveals what his every day existence is like as a Little Person in New York City.

Annie Tan has trouble connecting with her father across a language barrier and physical distance.

Carl Banks draws upon his past to help a desperate young man on a bridge.

Anoush Froundijian is cast in a bit part in the Armenian version of Beauty and the Beast.

Wendy Paige encounters a racist classmate in her new school.

7:30pm: Verdi’s Rigoletto A Victor Hugo play, haunting and scandalous, provided the inspiration for Verdi’s mid-career masterpiece about a vengeful but misguided court jester, out to rescue his deflowered daughter from a duke’s licentious clutches. None of it ends well, but along the way, the composer introduces several of his most iconic arias and duets—as well as an 11th-hour quartet that counts among the finest moments in opera.

Click here to watch the event on YouTube. #WhileWeBreathe will also premiere on WhileWeBreathe.org and Facebook. You can make a donation here. Following the premiere, all of the works will remain available for viewing.

11pm: The Groundlings: The Crazy Uncle Joe Show A special ONLINE version of your favorite long-form improv show! Watch as The Groundlings Players begin with suggestions given by you, and then proceed to weave the stories together, traveling back and forth through time, playing different characters in many different situations. AND, they keep it up for an uncanny 60 minutes straight!