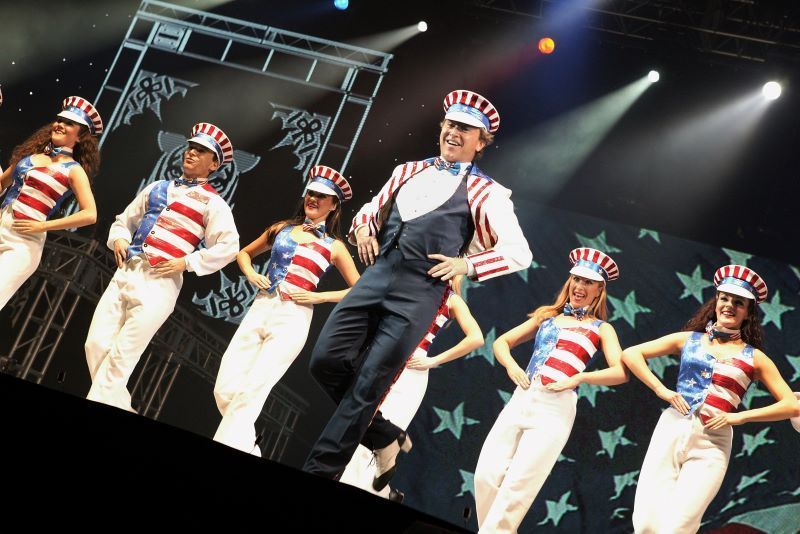 9am and 3pm: Lungs By Old Vic Claire Foy and Matt Smith reunited Duncan Macmillan’s Lungs, Foy and Smith, co-starred as Queen Elizabeth II and Prince Phillip in the first two seasons of Netflix‘s The Crown. In Lungs they portray a couple grappling with the decision to bring a child into today‘s world. The ticketed production, directed by Matthew Warchus, is performed live in front of a camera for up to 1,000 patrons to watch remotely. Todays performance is sold out but tickets are available for July 3 – 4 and tickets range from $20 – $65

2pm: Michael Flatley: Celtic Tiger  The international dancing master returns with another stage performance, taking as his subject the history and spirit of his native Ireland and its long traditions of music and dance.

3pm: Hamilton streams on Disney Plus. If you’re not subscribed, you won’t be able to use a free trial to see the show. Disney has shut down the free trial program, which means you’ll need to watch Hamilton from a paid subscriber account which you can do for $6.99 a month.

The hip-hop musical is hailed as a creative modern retelling of Alexander Hamilton’s journey to becoming a founding father of the US. Created by composer, playwright, performer and producer Lin-Manuel Miranda, Hamilton won 11 Tony awards in 2016and the 2016 Pulitzer Prize in Drama.

3pm: Best of Aerial Cirque du Soleil O, Alegria, Kurios and More  Rediscover these fan-favorite shows and enjoy mind-blowing acrobatics from the comfort of your home! featuring some of the best aerial acts from Cirque du Soleil!

This festival of short plays written by incarcerated students at Stateville Correctional Center in Crest Hill, IL is the result of a Spring 2019 playwriting course taught by playwright and Goodman Artistic Associate Rebecca Gilman as part of the Northwestern Prison Education Program (NPEP).

Immediately following the plays, Chatman moderates a discussion about the performances, NPEP and life at Stateville during COVID-19, including panelists Antonio McDowell, Josh Tepfer, Patrick Pursley, and Jennifer Lackey.

7pm: Flushing Town Hall to Present a VirtualCrossCurrent Choreographic Festival  The two-part dance festival will stream live as part of its new series of virtual programming, FTH at Home!

7pm: New Work Series New York Theatre Barn A 40-minute live-streamed collection of musicals in development by writers under the age of 20 (they’re actually ages 13 to 18): “Hide & Seek” by Danny Feldman tells the story of a high school student who realizes that he is gay. “Two Maiden Ladies” by Abigail Greenwood is based on the true story of two women in the nineteenth century in the first same sex marriage. “The Hippie and the Hitman” by Eise Marra follows a “hippie activist” and a hitman for the Irish Republican Army. “The Perfect Fit” by Joshua Turchin (he’s the one who’s 13) follows Alexandra, a driven child actor with a powerful voice who grows concerned that she is growing too old to play a child and too young to play an adult.

7pm: Send for the Million Men Here Arts Center Joseph Silovsky uses animatronics, puppetry, and projections to tell the story of the infamous execution of immigrant anarchists Sacco and Vanzetti, and of his own life as well.

7:30pm: Mozart’s Don Giovanni Imbuing the familiar Don Juan myth with a captivating combination of comedy, seductiveness, danger, and damnation, Mozart created an enduring masterpiece that has been a cornerstone of the repertory since its 1787 premiere. The opera offers a rare opportunity for two baritones to star alongside one another as the title Lothario and his faithful yet conflicted servant, Leporello, as well as three memorable female roles—multifaceted women who both suffer the Don’s abuses and plot their revenge.

8pm: Downtown Variety Take 12 By La Mama La MaMa and CultureHub have teamed up to create Downtown Variety, which uses emerging technologies to create a new venue for artistic expression and creative connections. Powered by LiveLab, a browser-based media-router CultureHub is developing for networked collaboration between artists, technologists, and audiences.

9pm: Word Up! joins The Old Globe’s online roster of programming. Word Up! is a digital opportunity for community members to connect with each other. A fun, festive word-based collaboration between audience and artist. This Mad Libs–style communal storytelling will feature a new performing artist every week, as well as special community guests from around San Diego. Art forms on offer may include spoken word, rap, puppetry, singing, and more, often with bilingual and multicultural elements. Don’t be confused by the 6 time as that is California time.

Suzanna BowlingJuly 27, 2022
Read More
Scroll for more
Tap
What To Watch July 2nd To Take Away The Blues
Where and When Are the Macy’s Fireworks in NYC?